The big news that I read today, was this great interview with Cullen Bunn by Multiversity Comics.  For whatever reason, I have been reflecting on the Sixth Gun recently, and I have mixed emotions knowing that the script for this series has reached its conclusion.  I still feel that the great comic series have a definitive beginning and end, and cannot wait to read the conclusion when the final arc, Boot Hill, drops.  It is going to be a long wait to find out what happens in the finale, but our journey begins in April and ends in June.  I cannot wait. 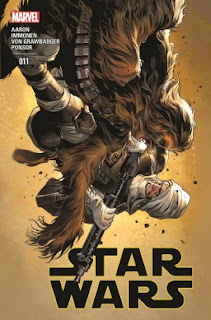 Pick of the Week:
Star Wars #11 - If any fan is having a hard time waiting for The Force Awakens, I suggest you start reading some comics.  This series has been the perfect cure for the pain that it is to wait for a movie that hopefully can live up to its trailer.  When we last left, Sana (Han's wife), Solo, and Leia were racing to save Luke from Grakkus the Hutt, who along with the help of the Gamemaster has Luke set to fight for his life for sport.  Chewbacca and C3P0 are already trying to help the young Jedi, but Dengar has other plans for Chewy.  This week we are treated to a Wookie fight, Luke taking on a half-beast, half-robot called Kongo the Disemboweler, and a secret plan from the Gamemaster that involves the Empire. This issue ended far too quickly.  Loving this series.

The Rest:
Paper Girls #2 - The mystery grows in the second issue of Paper Girls from Brian K. Vaughan.  We aren't given any more clues as to why mysterious creatures have descended to earth, but now in addition to the creepy dudes walking around we have pterodactyls to deal with.  At least that is what they look like to me.  Given what is happening outside, the girls agree to go to Mac's house and at least arm themselves with a gun.  This is when we learn that we may be dealing with the rapture, as Mac's dad vanished into thin air in his sleep.  Not sure what is happening, but I like it.

Nailbiter #17 - Is Agent Barker going down the dark path of other killers from Buckaroo?  What is Dr. Glory hiding and what is his role in this?  Despite learning about the caves, there is still a lot to uncover in Buckaroo.  On top of that, a Buckaroo native might be a serial killer that has been killing victims in Atlanta.  With the feds taking control of the Buckaroo investigation, Barker turns to the only person she can trust, Finch.  Looks like we are about to be treated to a new investigation to add a bit of flavor to the big picture.  The mystery grows and I am looking forward to where this is headed.

James Bond #1 - We are gifted this week with a Bond story penned by Warren Ellis.  We see a brutal side of Bond, as the issue opens with him seeking revenge for the death of 008.  With 008 out of the picture, Bond has to pick up additional cases as M searches for a replacement.  Ellis gives us a nice twist, as the political climate in the UK restricts travel with a weapon, and Bond is forced to travel to Berlin to investigate a new synthetic drug, unarmed.  Enjoyable debut that will appeal to both Bond and Ellis fans.  I am very curious to learn what Ellis has planned for 007.