Rises above this reviewer's ambivalence about the movie it chronicles 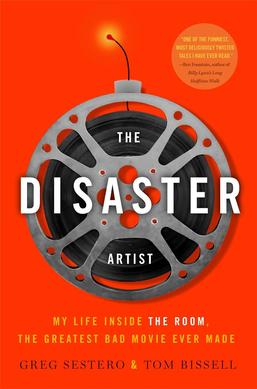 There is, apparently, a cottage industry of people affiliated with godawful-terrible movies telling the story of their experience making them. Michael Stephenson got in on the game a few years ago with his documentary Best Worst Movie about his involvement with Troll 2, and now Greg Sestero has gotten the story of his involvement in The Room out there. Sestero's story is set to form the basis of a film adaptation starring James Franco. Thankfully, I don't believe anybody is planning a tell-all about Birdemic yet. Despite the claims of people selling the stories of their own particular worst movies, Birdemic, for my money, remains the worst movie. But I've already harvested those fields.

I am deeply ambivalent about The Room, and to be honest, I'm pretty ambivalent about most of Sestero's account of his involvement with it. It has been a real struggle for me to separate my feelings about this particular work from my feelings about this field in general. See, I myself have been involved with some terrible, incompetent productions. I have been through the grind of acting workshops and castings and hunting for an agent and the stop-start pull of trying to get traction for a career in movies. Fully one-third of The Disaster Artist chronicles these activities in the young Greg Sestero's life, as he takes acting workshops in his Bay Area hometown, contemplates a move to LA, finally does move, gets an agent, takes more classes, auditions, questions himself, wonders if his mom's nay-saying was right, and struggles with the reality of having to get a day job that still accommodates increasingly infrequent auditions. To me, this was laborious stuff to get through, because I lived it. There are a million and a half people living it right now within a thirty-mile zone around where I type this, and there have been a million and a half people doing it here every day since Clara Bow put stars in the eyes of would-be it-girls and it-boys all around the country. It is a story that is profoundly unexceptional.

What makes Sestero's story different, though, is a peripheral character who evolves into a central one — the riddle wrapped in a mystery inside an accent that is Tommy Wiseau. Greg meets Tommy in an acting class in San Francisco, as Tommy murders a scene from A Streetcar Named Desire. Tommy's performance is so bizarre and incoherent that Greg asks Tommy to be his scene partner just to try to figure out what makes this odd man tick. It's unclear if Greg has yet, to this day, figured it out, but he's come closer than anybody else. If you don't already know, here's the mystery of The Room: In 2003, Hollywood witnessed the independent theatrical release of an evident ego-service project written, produced, directed, and starring an unknown, unkempt, and vaguely foreign cat named Tommy Wiseau. Wiseau's odd, heavy-lidded face stood twenty feet high, looming over motorists on scenic, heavily trafficked Highland Blvd from a billboard. That billboard stayed there for years and years. So too, the film played at midnight at the Laemmle Sunset 5 theater (across from LA's best deli, Greenblatt's. This point is not open for debate.) for years, and began to attract crowds drawn by word-of-mouth about how awful and bizarre this movie was, and the question of who was this ego-manaical oddball at the center of the whole thing?

Here, then, is the mystery of Tommy Wiseau: How did a man of totally indeterminate age and origin amass a fortune that allowed him to spend millions of dollars making and promoting a totally incomprehensible vanity project with characters, stories, and diseases that magically come and go, never to reappear again? Why did he make the baffling decisions on display in the film? Just, why? Wiseau has always been publicly circumspect regarding the answers to these questions, so The Disaster Artist is as close as we're likely to get to any answers. Where the book excels is in conveying the utter lunacy of the actual production, and the revolving door of cast and crew members trying to get this thing in the can. It also, in spite of everything, makes you feel sympathy for the inscrutable Wiseau.

As the RiffTrax for The Room points out (co-written by past NoaF interviewee Sean Thomason), the water in a fountain featured prominently in one shot is full of the tears of talented filmmakers whose films will never see the light of day as we all ironically watch The Room. In the end, the success of The Room, which is only reinforced by the narrative of The Disaster Artist, is both a testament to and an indictment of the way America awards success to individuals.

Bounses: +1 for the book's alternating narrative structure, which I credit to co-writer Tom Bissell; +1 for Sestero's narration in the audiobook, chiefly his impersonation of Wiseau; +1 for Tommy Wiseau as a character, even if key mysteries remain unanswered

Penalties: -1 for the Sunset Blvd and The Talented Mr. Ripley quotes that kick off each chapter — we get it, we get it, ok?;

Nerd Coefficient: 7/10 (audiobook) (a mostly enjoyable experience); 6/10 (in print) (still enjoyable, but the flaws are hard to ignore)

***
Posted by Vance K — nerds of a feather co-editor and cult film (and attendant baggage) reviewer, and LA-denizen since before the billboard for The Room disappeared from Highland Boulevard.