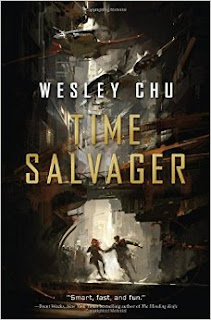 The year is 2511, and James Griffin-Mars is a chronman, one of the elite few who are charged with traveling into the world’s past to recon resources. You see, during the late 21st century, humans on Earth were at their prime, a technological golden age if you will. But it didn’t last long, and a series of wars and global disaster led humans to seek refuge elsewhere in the solar system. Now, 500 years in the future, much of those technological advancements are lost, having died with the last of the Technology Isolationists. Sure, there are still advanced space stations, ships, and weaponry, but these 26th century humans no longer know how to produce the energy needed to fuel them, and so must send operatives back through the chronostream to harvest resources. These resources from the past are essential, as they help prolong the impeding human extinction. But travelling the chronstream is not a task for the weak-hearted, and the job is starting to take it’s toll on James, a seasoned veteran. He’s tired of watching people die over and over again, powerless to help them because of the time laws. Creating ripples in the chronostream is a dire offense, but bringing someone back to the future (ha) is strictly forbidden.

The story is great. The world is fascinating, the imagery is sound, and the ideas Chu has come up with here are entertaining to say the least. I particularly like the personal protection system the chronmen wear, being a series of bands on their arms that they can telepathically communicate with and that do everything from act as a Babel Fish to paint disguises to create an exosphere to shoot laser beams. It’s no wonder that Paramount jumped on this one and set Michael Bay at the helm a month before the book's release.

I was totally wide eyed and engrossed in this book until about a third of the way through when the character Elise is introduced. Wow, she is obnoxious. I think her purpose is to be cute and smart and independent, but instead she comes across as childish, naïve, selfish, careless, and unappreciative. Kind of like this, but worse because she’s supposed to be a brilliant scientist:

Frankly, Elise’s chapters are insufferable. The time spent with the Elfreth (a wasteland tribe) is flat boring and the fact that most of it is told from Elise’s POV makes it even worse. And despite the fact that Elise refuses to acknowledge the reality of the danger that she is in and continually puts herself in more, yells “take it off, take it off” when she realized the “ugly” bands can be used as weaponry, and needs to be constantly babysat but has children following her around all the time because, ya know, she’s a woman, the most insufferable part of it all is the first interaction between her and a 90-year old woman James brings to the camp. The women, upon site, visibly hate each other, with Elise pretty much crossing her arms and stomping her feet and the elderly woman clinging to James just to antagonize her. THIS is SICKENING. I just….can’t. And there’s so much more too. These people are starving and Elise has to walk up 70 flights of stairs to get to her makeshift lab and she thinks to herself "well, at least it's good exercise." Yeah, because thats what women who are sustaining off of slug paste are concerned about, getting their exercise. Barf.

But not all the characters are as bad as Elise. Grace Priestly is fantastic (mostly) and James Griffin-Mars constantly challenges the stereotype he's designed to fit. In fact, it is his rejection of the expectation of machismo and absence of emotion that fuels the major plotline of the story. First, he has already failed at protecting his family and is constantly haunted by it. Sure, he seems overly concerned with protecting Elise, but that is because he is substituting her for his prior failures in an almost desperate attempt to right the wrong. Second, chronmen (most of whom are men) must interact with the past, usually entering at points of time immediately preceding a major disaster, but they are expected to not feel emotion or compassion for any of the people they interact with, and are especially not allowed to alter their destiny. This takes its toll on the chronmen, and most poke the giant in the eye (a.k.a. commit suicide) long before their contract is up. But James, on his last job before his contract is bought out, caves and breaks the greatest time law ever (I think this is spoilery but it’s in the publisher description) by saving someone’s life and bringing them back to the future (still funny).

I know I'm using some strong words to describe my feelings on Elise, but that's because it made me really mad. And not just because of the negative stereotype rigmarole, but mostly because this book was awesome up until her and she pretty much ruined it for me. Now, if this Elise stuff won’t infuriate you, or if you can just accept it for what it is, Time Salvager will be very entertaining. The imagery is fantastic and the world is imaginative. I especially love James' beat-up ship 'Collie', which reminds of the Bebop only smaller.

I think this book will translate well into a movie, and I’m actually kind of excited to see all the technology and time travel come to life. And I'm sure Michael Bay can’t wait to cast a supermodel to play Elise and then put her in a tight fitting Prada lab coat. Hopefully though no one will be carrying around a laminated print out of the statutory rape law this film.

Bonuses: +1 for naming the Elfreth after the oldest community in the US which happens to be in my backyard, +1 for visual imagery especially during time travel

Penalties: -2 for everything about Elise

Nerd Coefficient: 6/10 ‘still enjoyable, but the flaws* are hard to ignore’

*and by flaws I mean Elise. This book would be very good if she wasn't in it.

------
POSTED BY: Tia,  who is becoming increasingly weary of writing about the misrepresentation of women in SF/F and other media and wonders why this is still and issue but realizes that America is only just beginning to recognize that there is a problem with flying the Confederate flag over government buildings 150 years after the Civil War ended and knows that equal rights does not mean equal representation and so will not stop writing about it and will call it out when she sees it because "you're only as loud as the noises you make."