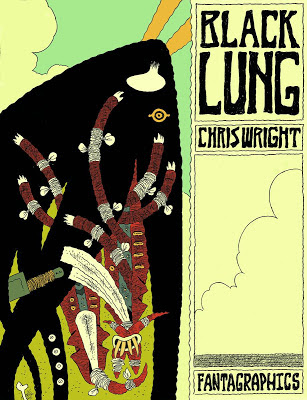 A teacher gets shanghaied by pirates, becoming an unwilling witness to the depths of human depravity and brutality on the high seas. Were it not for his literacy and a psychopathic guardian angel, things would have been much worse for the old fop. Things still went real bad, though. That’s what happens when you hang out with pirates.

A pirate comic? By gar it’s been a while.

Yes, but this is a pirate comic from Fantagraphics. And writer-artist Chris Wright (Inkweed) seems like the kind of creator with pretensions. Arty pretensions – pretensions that Fantagraphics often likes to indulge. Don't misunderstand me: Fantagraphics has put out wonderful books. In fact, some of the best comics ever. But they have also produced smug, pointless comics, books that are little more than the masturbatory scribbling of self-indulgent artistes. And they burned me too often in my twenties.

So I didn’t entirely expect to enjoy Black Lung as much as I did.  Then somewhere around page five I realized that there’s an actual story in Black Lung, a human story. Granted, despicable and truly damaged humans. Pirate humans. But humans none the less.

Chris Wright’s story is bleak and brutally violent. There are few redeeming characters in Black Lung, just your everyday, run-of-the-mill collection of wharf rat gangsters, mad priests, syphilitic first mates with penchants for finger removal, and the good Captain Brahm – a man whose sole goal in life is to commit enough violence so that he’ll be damned to hell, and thus rejoined with his heathen, whore of a wife.

Eschewing the easier path of gore and glorification, Wright portrays this violent world in a detached, realist manner. There’s no glory, simply blood lust. No bravery, only brutality. Wright seeks to understand his characters, allowing them explore and explain their violent behavior. For some, it’s necessity. For others, motives are purely mercenary. Some just like to kill. Wright does not shy away from exploring the drives and doubts of his characters  – who are, after all, murderous, scheming pirates.

The subtlety of Wright’s story and lyricism of his dialog is contrasted by his surprisingly mesmerizing artwork. Surprising, because I did not expect to be drawn in by what appears on the surface to be intentionally ugly cartooning. Wright’s often grotesque characterizations fall somewhere between Lewis Trondheim and Klasky-Csupo. His figures are neither anthropomorphic nor humanistic. Some resemble furry animals, others ugly humans, and still others look more like an amoeba than a mammal. Quite often, they look like muppets. Terrifying muppets. Pirate muppets.

Wright’s genius is further evident in his ability to use these aberrant cartoonish characterizations to convey human emotion, particularly terror. Wright’s portrayal of violence is stark and chilling – despite or perhaps because of his singular style. His artwork expertly combines contrasting elements, frantic inking, and subtly detailed backgrounds to create a unique visual and unexpectedly unsettling experience.

Black Lung worked on all counts. Plus, pirates.

Penalties: None. Damn the rules.