Thursday morning is upon us and it is time for another recap of what comics I read this week.  That's right, it is time for Thursday Morning Superhero! My budget limited me from picking up some great comics this week, but I am quite pleased with my haul.  No real bad book in the bunch. 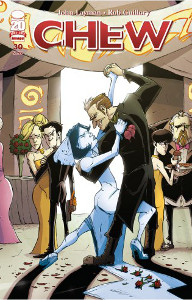 Pick of the Week:
Chew #30 - Issue 30 of Chew is a landmark issue for multiple reasons.  It marks the half-way point in the series and the conclusion of the current Space Cakes arc.  This is a tough review to write because this issue features some of the humor that has sustained this excellent book, but also featured a very rare and dark moment that truly saddened me.  I can't say this book has evoked this type of emotion before, but I think it is testament to the characters and the world Layman has created.  I actually care about Tony Chu and his rag tag gang.  It appears that the path laid out ahead for Tony is going to be a rough one.  This book also featured a poster of a toilet seat at a hospital.  That is all.

Uncanny Avengers #2 - Captain America and crew are still trying to deal with the aftermath of Avengers vs. X-men.  Cap wants to put together a new team that will have a strong mutant leader in an attempt to ease tensions on the homefront.  Meanwhile, Rogue, the Scarlett Witch and Professor X's body have been captured by Red Skull.  This book started a little slow, but I love me some Red Skull and his latest scheme didn't disappoint.  Really enjoying this series and can't wait for more Red Skull.

The Not so Good:
Nowhere Men #1 - While this comic has me intrigued, I felt the story bounced around a bit too much for a first issue.  World Corp. is a group of four top scientists who are working on some pretty scary stuff, but I don't know what the true focus of the book will be.  It seems to be filled with good characters and an interesting premise, but it felt flat and didn't hook me.  This is one I will keep my eye on for future issues, but only if I hear good things.

The Rest:
FF #1 -Reed Richards and the Fantastic Four are leaving this dimension for a quest and need to find replacements to oversee FF for four minutes in their absence in case something happens.  She-hulk, Medusa, and Ms. Thing are quick to join, but Ant Man isn't so sure.  Interspersed with the kids' opinion about what FF is, Matt Fraction has a good balance of humor that keeps the pacing of the story fresh.  Something tells me that the four minutes with this crew in charge may be quite eventful.

Morning Glories #23 - More secrets are revealed about Morning Glories Academy and there are some hints about Hunter's origin.  Nick Spencer's world has grown a bit confusing with all of the flashbacks and the secrecy around MGA.  I am a happy reader as this book inspires me to reread this series from the beginning to see when the seeds were planted that lead to the payoffs in this issue.

Bedlam #2 - This issue continues the dark journey that was laid out in issue one.  We learn a little more about Mister Red, but there is a lot of mystery and intrigue surrounding this serial killer.  The police have their plan, but the demented mind of this killer keeps things very fresh and interesting.  If this series continues down the path that Spencer has laid out thus far, it will quickly become one of my favorite series.