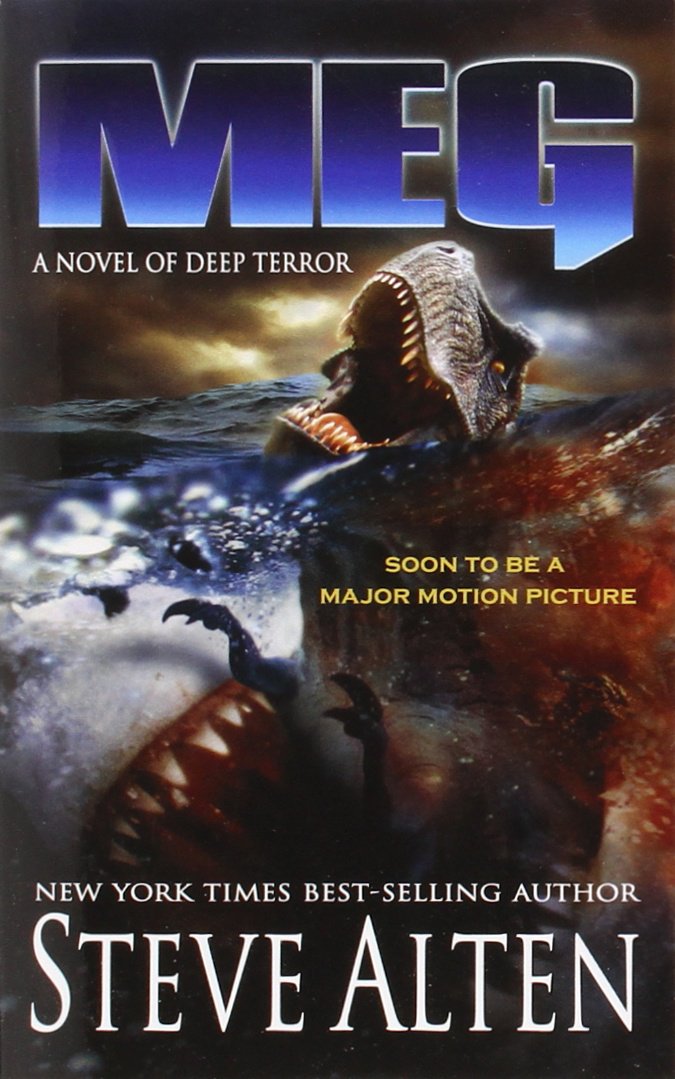 My daughter is really into dinosaurs. Like, really, really into them. So naturally I wanted to read a book about dinosaurs. Only, I've already done the Jurassic Park novels and Red Raptor isn't available for Kindle (or at local bookshops). So I went for the next best thing: a novel about prehistoric sharks.

Meg is the story of Naval diver Jonas Taylor, who thinks he saw a Megalodon on a disastrous dive down the Mariana Trench. He then gets a PhD, and flogs this kooky idea wherever possible: that vents at the bottom of the Trench make it possible for life once thought extinct to survive. Actually there's some merit to this view: not only does the Mariana Trench have a much biodiversity than once assumed, scientists have also discovered that species once thought extinct are still around, like the Coelacanth. (Though that's a 60kg fish, not one that's as long as two school buses.)

Plausibility aside, some people do believe in Taylor, including oceanography patron Masao Tanaka, who wants to build a refuge lagoon for whales near Monterrey, CA. He also wants Taylor to assist his son on another dive down the Trench, this time to recover an earthquake-monitoring device. Why? I can't remember, and frankly, it doesn't really matter. Taylor agrees, Tanaka's son gets chomped and a female Meg ascends through the middle portion of the ocean to the warmer water above.

What ensues will be familiar to aficionados of the "monster eats people" genre: the giant shark proceeds to eat a lot of people. This is, of course, completely absurd. Great white sharks, which are much smaller than a megalodon, don't even bother eating people, because our fat content is too low for the energy it takes to consume us. When they bite humans, it's usually because they mistook us for seals (which do have enough fat), or because they're just trying to see what we are, and they do that by biting. Yet this 25 meter shark, which presumably requires a shit ton more fat than a great white to keep the motor running, inexplicably acquires a taste for human flesh.

This is only the tip of the spray-cheese iceberg. There's a "historical" scene where a megalodon eats a tyrannosaurus rex, even though the two species didn't exist at the same time.* There are characters introduced for the sole purpose of being eaten, my favorite being the naval officer "just one job aware from retirement." There are multiple over-the-top chomp scenes, each more gruesome and outlandish than the last, and an extended scene from inside the meg's belly. All amazing, and patently absurd.

Most characters, furthermore, are straight-up cardboard, like the ass-covering captain who covers up the first meg discover and will endanger everyone to save his own career--even coming out of retirement to deep-six whatever Taylor has planned. Or Terry Tanaka, the headstrong and free-spirited daughter of patron Masao Tanaka, who hates Taylor until she loves him. But the "best" of all has to be Masao Tanaka, who speaks English with the diction of proverbs, bows frequently, has stereotypically "old world"** views on gender, refers to Taylor as "Taylor-san" and peppers his speech with hai. Only problem is, we're told Tanaka grew up in Seattle, the adopted son of an American couple. Now, I don't know about you, but most people I've met who immigrated to the US as children speak English fluently; and, though possessing two cultural backgrounds, are just as American as anyone else. Yet Tanaka, somehow, embodies every every stereotype of Japanese-ness as portrayed on American television programs prior to 1990. I mean, come on--only weeaboos do that.

All that said, there's something likable about Meg. Sure it's a trashy dumpster fire of bad writing, but the ridiculousness factor is so absurdly high, you kinda sorta can't help enjoying the experience of reading it. As Chloe said on twitter, it's a great bad novel. Chomp chomp.

*This is explained as "hypothetical," though it's still ridiculous.

**Framed as "old world" in the novel.