I felt a bit dirty as I paid for my comics this week and left the new issue of The Walking Dead on the shelf. I started reading the series with some of the trades, but switched to single issues when I caught up sometime in 2011. I have been a loyal reader for six years, but feel that I need to take a step back and take a break from Rick and focus on other titles. I am not saying that it has overstayed its welcome, but I worry that if I don't take a break it is a title I am going to no longer enjoy. I have grand plans for starting at the beginning again soon and hope that I will have a better appreciation for where things are if I return to where it all began. 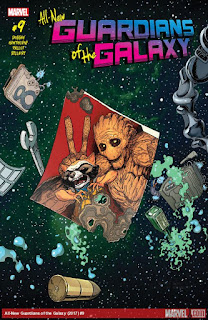 Pick of the Week:
All New Guardians of the Galaxy #9 -  Gerry Duggan hits us with an emotional Guardians issue this week. Rocket and Groot went to collect the credits for their last heist, only to be ambushed by a mysterious figure dressed like Death. One of the most endearing aspects of the Guardians, in my opinion, is the connection that the reader has to the characters and the connection the characters have with each other. While I admit that I haven't read a ton of Guardians comics, Duggan does an exceptional job of bringing that raw emotion to the page.  While I am not sure what the final twist in this book implies, I am definitely tuning in to the next issue to learn what really happened to Groot and who this mysterious Gardner is.  I picked up this book on a slow week to check it out and it has quickly become one of my favorite ongoing titles that I am currently reading.

The Rest:
Daredevil #26 - Part one of "The Land of the Blind" is a doozy of an issue! We learn that Daredevil is still feeling guilty over the fate of Blindspot, and is currently assisting on the turf that Blindspot used to protect. A mysterious message turns up inviting Daredevil to China at the request of his old partner. Weary it may be a trap, Daredevil makes the trip and is ambushed by the Hand. While pretty formulaic, I welcome the legal break we seem to be in store for and look forward to some good old fashioned action. There are mysterious powers and beings in play and I am excited to see what Charles Soule has planned for the man without fear.

Star Wars Adventures #1 - I'm not sure how IDW has the licence to write Star Wars comics, but I am pleasantly surprised with this incredibly fun debut.  Aimed for a younger audience than the Marvel books, Star Wars Adventures features two short stories that are both very enjoyable. The first is part one of a bigger series that focuses on the life of Rey when she was a scrapper on Jakku.  The second is a one-off story that centers around Obi-Wan during the Clone Wars.  Both are lighthearted, entertaining, and highly recommended for Star Wars fans both young and old.  I definitely am looking forward to sharing my copy with my kids.

Lark's Killer #2 - The second issue of Bill Willingham's new comic continued the story of Lark, a runaway who found her self transported into a fantasy land after a shoplifting attempt at Walgreens went awry. In the first issue she narrowly escaped a group that was trying to kill her, and in this issue we learn a bit more about Frogbarding, the sell sword who accepted her offer of one dollar to escort her out of the town of Mercy Rock. Willingham taught us a bit more about this world of his and that the governor is using ghost holes, portals between worlds, for some nefarious purpose.  Whatever brought Lark to this land, she poses a serious threat to his ultimate plan and he plans on killing her and anyone she interacts with.