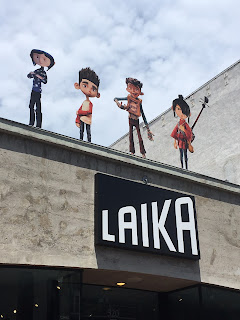 Last week was a flurry of pop culture, crowds, long lines, and a minor scandal in San Diego as the nerds arrived four days of panels, swag and fun. While I didn't manage to accomplish everything on my SDCC checklist, I am happy to report that the good folks with Comic Con International hosted another successful convention for over 160,000 nerds. Breaking from tradition, I decided to base my recap on trends I noticed during the show.

Laika Steals the Show:
Laika Studios brought the Laika Experience to the Gas Lamp and took over a gallery on 5th Ave. The good folk from Laika filled the gallery with scenes, puppets, and props that were used in the filming of Coraline, Paranorman, The Box Trolls, and Kubo and the Two Strings. What I thought would be a simple stop in and check everything out, turned into a guided tour from employees from Laika Studios.  This additional touch made the whole experience more personal and provided incredible insight into the amazing world of the four films.  Seeing the hand-made creations up close, learning about the animation process, and hearing directly from people involved in the project gave me an even greater appreciation of the films that my whole family already thoroughly enjoy. Definitely some of the nicest people that I interacted with in San Diego and an event that I hope everyone in San Diego had the chance to experience. To top it off they brought the limited Nike shoes that were created in honor of each film and even gave a few pairs away.

Hidden Gems:
My Friend Dahmer Panel
When I heard that they were turning the Eisner Award winning graphic novel from Derf Backderf into a feature film, I was excited and extremely skeptical. This panel, hosted in the Horton Grand Theater, completely erased any skepticism that I had. The panel opened with a trailer for the film, and I had chills. Ross Lynch, who is best known for his acting for Disney TV, absolutely shined in his role as Jeffrey Dahmer. Throughout the panel, it became clear that the director, Marc Meyers, wanted to remain very true to the first hand account of Dahmer in high school as told in Backderf's graphic novel. Not only did they film in the Dahmer house, but Backderf had such faith in Meyers and company that he didn't spend much time on set. This demonstrates that Backderf had faith in Meyers and crew and didn't feel the need to interrupt the creative process. Backderf stated that he stopped by, but through conversations with Meyers had no doubt that the adaptation would be true to the source material. It is expected to hit theaters in November and enjoy the trailer below!

Gabriel Rodriguez Panel
I wish more people would have taken the time to hear Gabriel Rodriguez speak about his career in comics.  Coming from an architecture background and growing up in Chile, Rodriguez was able to find a home at IDW comics that started by his ability to draw likenesses for licensed comics. He really became a star at IDW with his work on Locke and Key, which then opened the door for his work on Little Nemo: Return to Slumberland and for his first solo project.  Rodriguez is writing and drawing Sword of Ages, which should find its way to shelves in October. From what I have heard from friends who know Rodriguez and from how he spoke on the panel and interacted with fans after, he seems like one of the nicest and most talented individuals in this industry.  I really look forward to his first creator owned project and can't wait to read Sword of Ages.

Mr. Robot Puzzle
One of the biggest surprises that I stumbled on at SDCC was the Mr. Robot off-site. While I don't currently watch the show, I am going to start watching soon as it really made me intrigued about what the show was all about. On the surface the off-site was a great treat for fans, providing $20 worth of credit in e-Coin, a currency used in the show.  After waiting in line for a bank card, fans were treated to lunch and a list of retailers in San Diego that you could spend your e-Coin balance. If you asked the host if the Red Wagon BBQ was hiring, you were presented a job application that spelled out a series of clues. If you successfully deciphered the codes, you were given a passphrase and a phone number. When you spoke the passphrase to the person who answered the phone, you were instructed to bring your application to a specific intersection at a specific time. Curious about what this would entail, I was waiting on the corner when a man dressed in a black leather jacked quietly asked if I was Mike. Upon confirming this fact I was led into a secret room, my phone was confiscated, and I was face to face in an interview with a man wearing a demon mask and caught up living a scene from the show.  It was one of the most surreal experiences I have had at SDCC and has me extremely curious about what Mr. Robot is and plan on tuning in.

More Immersive Experiences:
Blade Runner 2049
While I didn't get a chance to check this off-site experience out, one of my friends went through and commented at how truly immersive his experience was.  It started with a VR chase that ended in a crash.  Upon removing the VR headset, he emerged in a gigantic tent that felt like a set from the movie. Complete with the crashed vehicle he just experienced in the VR and actors spread throughout the set, fans who braved the long lines were able to fully immerse themselves in the world that Phillip K. Dick created.  I was bummed to miss out, but happy to hear about what a great experience it was.

Westworld
One of the most talked about off-sites at SDCC was Westworld. The lucky fans who were able to book appointments, were able to check-in and register to attend the Westworld theme park from the HBO show. Once they made it to the hotel, fans changed into complete western attire and entered a room that, similar to Blade Runner, put them in what felt like an actual set from the show.  After interacting with the characters in the room, fans got to keep their cowboy hats as a prize and left knowing they experienced an extremely selective event at SDCC.

Moving Forward:
Wristband counterfeiting
What should have been an exciting Saturday in Hall H featuring Stranger Things 2 and Marvel was marred by 300-400 fans not making into the Hall due to wristband counterfeiting. SDCC responded quickly and provided fair compensation, but we are almost guaranteed to see big changes in how admission into Hall H is handled in 2018. I may be in the minority, but I would like to see a lottery and a decrease in the number of fans camping out for days at a time. It always seemed like a huge safety concern from my perspective.

Badge improvement
Last year CCI introduced RFID enabled badges with pretty good success. Attendees had to scan badges to enter and exit the convention center and while it had the occasional snafu, appeared to limit the number of fake badges and the convention floor felt noticeably less crowded. I didn't hear of any issues this year and the crowd seemed used to the scanning in and out process and flowed well. I wouldn't be surprised to see this expanded on in terms of helping with Hall H, but time will tell.

This is just a snippet of the offerings that SDCC has each and every year. If you are interested in attending you should register for a Comic Con ID and hope you have some good karma when badges go on sale for 2018.