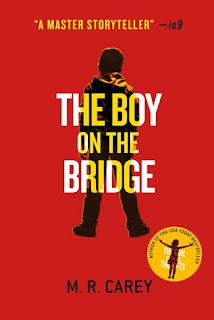 
From the author of USA Today bestseller The Girl With All the Gifts, a terrifying new novel set in the same post-apocalyptic world.

Once upon a time, in a land blighted by terror, there was a very clever boy.

The people thought the boy could save them, so they opened their gates and sent him out into the world.

To where the monsters lived.

Why We Want It: This is a spin off of the excellent novel The Girl With All the Gifts and I'm intrigued. 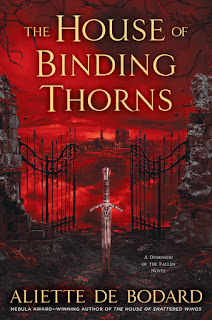 
The multi-award-winning author of The House of Shattered Wings continues her Dominion of the Fallen saga as Paris endures the aftermath of a devastating arcane war….

As the city rebuilds from the onslaught of sorcery that nearly destroyed it, the great Houses of Paris, ruled by Fallen angels, still contest one another for control over the capital.

House Silverspires was once the most powerful, but just as it sought to rise again, an ancient evil brought it low. Phillippe, an immortal who escaped the carnage, has a singular goal—to resurrect someone he lost. But the cost of such magic might be more than he can bear.

In House Hawthorn, Madeleine the alchemist has had her addiction to angel essence savagely broken. Struggling to live on, she is forced on a perilous diplomatic mission to the underwater dragon kingdom—and finds herself in the midst of intrigues that have already caused one previous emissary to mysteriously disappear….

As the Houses seek a peace more devastating than war, those caught between new fears and old hatreds must find strength—or fall prey to a magic that seeks to bind all to its will.

Why We Want It: The House of Shattered Wings was one of my favorite novels published in 2015 and this standalone sequel is a must read for 2017. I've been reading Aliette de Bodard since her debut novel Servant of the Underworld and she never disappoints. 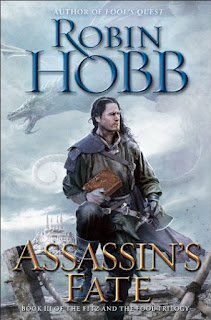 
More than twenty years ago, the first epic fantasy novel featuring FitzChivalry Farseer and his mysterious, often maddening friend the Fool struck like a bolt of brilliant lightning. Now New York Times bestselling author Robin Hobb brings to a momentous close the third trilogy featuring these beloved characters in a novel of unsurpassed artistry that is sure to endure as one of the great masterworks of the genre.

Fitz’s young daughter, Bee, has been kidnapped by the Servants, a secret society whose members not only dream of possible futures but use their prophecies to add to their wealth and influence. Bee plays a crucial part in these dreams—but just what part remains uncertain.

As Bee is dragged by her sadistic captors across half the world, Fitz and the Fool, believing her dead, embark on a mission of revenge that will take them to the distant island where the Servants reside—a place the Fool once called home and later called prison. It was a hell the Fool escaped, maimed and blinded, swearing never to return.

For all his injuries, however, the Fool is not as helpless as he seems. He is a dreamer too, able to shape the future. And though Fitz is no longer the peerless assassin of his youth, he remains a man to be reckoned with—deadly with blades and poison, and adept in Farseer magic. And their goal is simple: to make sure not a single Servant survives their scourge.

Why We Want It: Robin Hobb is at the top of her game with Fitz and the Fool trilogy and Assassin's Fate may well be the volume that truly wraps up the story of FitzChivalry Farseer. If so, it has been a well earned ending for one a spectacularly written saga. 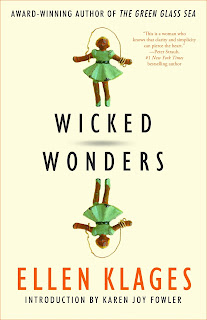 A rebellious child identifies with wicked Maleficent instead of Sleeping Beauty. Best friends Anna and Corry share one last morning on Earth. A solitary woman inherits a penny arcade haunted by a beautiful stranger. A prep-school student requires more than luck when playing dice with a faerie. Ladies who lunch—dividing one last bite of dessert—delve into new dimensions of quantum politeness.

Whether on a habitat on Mars or in a boardinghouse in London, discover Ellen Klages’ wicked, wondrous adventures full of wit, empathy, and courage.

Original introduction by Karen Joy Fowler, bestselling author of We Are All Completely Beside Ourselves.

Why We Want It: Ten years ago Ellen Klages published her debut collection Portable Childhoods with Tachyon and it was wonderful and delightful and a treat to read. Wicked Wonders marks the second collection from Klages and I can't wait to read it! 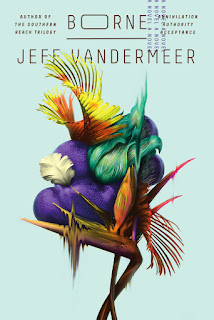 
In Borne, a young woman named Rachel survives as a scavenger in a ruined city half destroyed by drought and conflict. The city is dangerous, littered with discarded experiments from the Company—a biotech firm now derelict—and punished by the unpredictable predations of a giant bear. Rachel ekes out an existence in the shelter of a run-down sanctuary she shares with her partner, Wick, who deals his own homegrown psychoactive biotech.

One day, Rachel finds Borne during a scavenging mission and takes him home. Borne as salvage is little more than a green lump—plant or animal?—but exudes a strange charisma. Borne reminds Rachel of the marine life from the island nation of her birth, now lost to rising seas. There is an attachment she resents: in this world any weakness can kill you. Yet, against her instincts—and definitely against Wick’s wishes—Rachel keeps Borne. She cannot help herself. Borne, learning to speak, learning about the world, is fun to be with, and in a world so broken that innocence is a precious thing. For Borne makes Rachel see beauty in the desolation around her. She begins to feel a protectiveness she can ill afford.

But as Borne grows, he begins to threaten the balance of power in the city and to put the security of her sanctuary with Wick at risk. For the Company, it seems, may not be truly dead, and new enemies are creeping in. What Borne will lay bare to Rachel as he changes is how precarious her existence has been, and how dependent on subterfuge and secrets. In the aftermath, nothing may ever be the same.

Why We Want It: Even when you sort of know what a Jeff VanderMeer novel is about, you really have no idea what sort of journey you're about to embark on. All you know is that it will be unlike any you've undertaken before and that it is more than worth the effort. 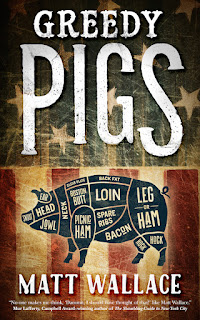 “I never did give them hell. I just told the truth, and they thought it was hell.”

Politics is a dirty game. When the team at Sin du Jour accidentally caters a meal for the President of the United States and his entourage, they discover a conspiracy that has been in place since before living memory. Meanwhile, the Shadow Government that oversees the co-existence of the natural and supernatural worlds is under threat from the most unlikely of sources.

It’s up to one member of the Sin du Jour staff to prevent war on an unimaginable scale.


Why We Want It: Greedy Pigs is the fifth volume in Matt Wallace's amazingly good Sin du Jour novella series. Ive read and reviewed the first four novellas and we love them all. This is one of my favorite things going on in speculative fiction right now and I'm thrilled and eagerly awaiting the publication of this one. Matt Wallace is a friggin treasure.