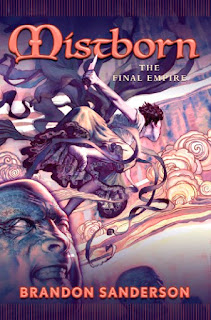 Executive Summary: The Final Empire is the first installment in Brandon Sanderson's mega-popular, multivolume Mistborn Saga. The world presented is sugaring under the heel of the Lord Ruler, a creature believed to be evil for the power he wields over the populace on the world of Scadrial in the land known as the Final Empire. The Lord Ruler was once the Hero of Ages, a figure out of legend who became a god when he quelled an ancient evil at the mythical Well of Ascension. Of course quelling the evil force may have been the easy party. Keeping it at bay for a thousand years changed the Hero of Ages (doesn't that just sound optimistic?) into the creature who took the name Lord Ruler (less optimistic, no?). The novel begins here, as a group of rebels led by the charismatic Kelsier (the only known person to escape the Alcatraz-like Pits of Hathsin), try to break the Lord Ruler's tyrannical hold over the people he rules over as a creature just a half-step removed from being a god.

Dystopian Visions: The Hero of Ages thought he was doing the right thing by becoming a god to keep evil at bay, but now the people who know of the mythical Hero of Ages see him as an evil dictator. There are strange mists constantly floating in the shit, ash fall from the sky and the sun is blocked from view. Not exactly an uplifting setting. The Lord Ruler also has in his employee the Koloss, monstrous figures with spikes in their body who serve as the muscle as well as the policing force of the Inquisitors, imposing figures with spikes driven into their eyes.

To put all this briefly, the Final Empire of Scadrial is oppressive to all but the most elite.

Utopian Undercurrents: The Lord Ruler, like most “evil” antagonists think they are doing good and saving the world. By novel’s end and later in the series, what he was doing may just have been the right thing in spirit. Who doesn’t think vanquishing the force of evil and destruction is a bad thing? Unfortunately for the people who live under his rule, the execution and aftermath of the “saving moment” spiral way from the “right” thing drastically.

Level of Hell: 7th. The levels of hell embodied best in this book would be the Seventh (Violence) and Eighth (Fraud). The world is rife with violence through embodied by the Koloss and Inquisitors and Fraud by the Lord Ruler.

In Retrospect: In the decade since The Final Empire first published, Brandon Sanders has established himself as one of the brand-name powerhouses in epic fantasy. The venerable Adam Whitehead, purveyor of the estimable Wertzone blog, has been laboriously gathering lifetime sales numbers for SFF writers, with his initial list in 2008 and updates in 2013, 2015 and at the end of 2016. Sanderson doesn’t appear on the first list in 2008, which is not surprising since he was new to the scene with only three books on the shelves. In 2013, he ranks 48 with approximately 15 million in sales and the most recent ranking (three years later) he ranks at 40 with approximately 22 million in sales. Moving seven million books in with your name on them in three years is no small feat. Granted, three of those titles also had Robert Jordan’s name on top of them so had a built-in audience but Adam estimates nearly half of those sales (10 million) come from his solo titles. Suffice to say, a book with “Brandon Sanderson” landing on the bestseller list during its first week of publication is a safe bet.

The series is often placed on “Best Fantasies/Series of the 21st Century” or whatever specifically the list-creator comes up with to differentiate his or her list from the three “Best of …” list the previous month.

It is safe to say that The Final Empire is Brandon’s break out novel, the one that opened the door to The Wheel of Time for him, and led to his success. The great thing? It is only a hint of amazing novels of worldbuilding and storytelling to come from an author who will be regarded as a Master of the genre in the years to come, if he hasn’t already.

Rob Bedford lives in NJ with his wife and dog. He has been a site editor and book reviewer for SFFWorld since 2000, wrote for SF Signalfrom 2013 since it sadly closed in 2016, occasionally for Tor.com, and has a slowly dying blog about stuff. He is also, as his wife calls him, a beer snob. If you want to read random thoughts about books, beer, or his dog you can follow him on Twitter: @RobHBedford
Posted by The G at 12:00:00 PM