We just wrapped up the third and final debate and don't know either of the candidates' stance on comic books.  Marvel has re-imagined Donald Trump as a super villain, but the Marvel CEO has made campaign contributions to the Donald.  That leads me to believe that Trump is a Marvel fan and is looking forward to Guardians of the Galaxy 2 this next summer.  Did you see that trailer?   Hopefully we can have some additional insight on this crucial topic in the next few weeks so I can make an informed decision. 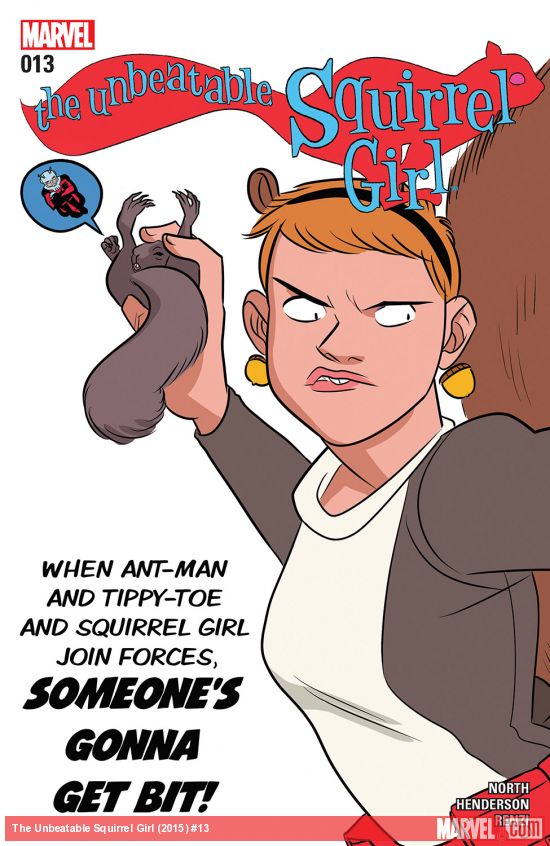 Pick of the Week:
The Unbeatable Squirrel Girl #13 - Sometimes when you are home sick with the flu you just want a simple book about a superhero who can talk to squirrels, a villain who splits in two every time he is hit, and a kidnapped Ant-Man for undisclosed purposes.  While I am still relatively new to this series, I know what title I am going to go back and read on Marvel Unlimited.  This issue was a lot of smart and chaotic fun that I can't recommend enough.  One of my buddies has been telling me this for over a year and I have picked up an issue or two, but I think it is time to add this series to my pull-list.  Bring on the Squirrel Girl movie!!!

The Rest:
Dirk Gentley's Holistic Detective Agency: The Salmon of Doubt #1 - I had no idea of what to expect from this title, other than it seemed like a quirky detective series that I believe was recently picked up for a television show.  Based on Douglas Adams' character created after the end of Hitchhiker's Guide to the Galaxy, this series promises to be a whole lot of fun.  After reading the first issue, I feel like I have be transported back in time to an old Lupin III manga.  Dirk's style and attitude remind me of the famous detective, but the addition of the supernatural provides a unique spin for it.  I wanted more to happen in this series, but had my interest piqued enough to return for the second issue.  Arvind Ethan David definitely has developed some unique characters that could make this book something special.

Dept H #7 - Matt and Sharlene Kindt's underwater mystery continues with an intense issue that still doesn't get to the bottom of who may have killed Mia's father.  Due to sabotage, the crew is in grave danger as many compartments of their facility are filling with water.  In addition to the malfunctions the crew is dealing with, there is a virus on the loose that could kill thousands, if not millions, if it is brought to the surface.  Despite this, the Kindts managed to put together a serene issue that shed valuable insight into one of the crew members who seems on the up and up.  Learning more about about Mia's father and his studies has been one of the most rewarding aspects of this series.