Matthew Irvine is a film professor, producer, and director. He is also the rights-holder to one of my all-time favorite cult films, Carnival of Souls. The movie was made in 1962 by a team of filmmakers in Kansas who worked together making industrial and educational films for their day-jobs, and decided to make a feature film after director Herk Harvey found an abandoned amusement park in Utah. It had a quiet reputation as a gem of truly independent horror films, but for years, collective wisdom held that the film was in the public domain, so terrible copies of it proliferated. But now there's an unbelievably gorgeous version out from the Criterion Collection that just arrived in stores. I got to talk with Matthew about how he got involved with the movie, and some of the backstory behind how we got here.

NF: What's your connection to Carnival of Souls? What drew you to it? 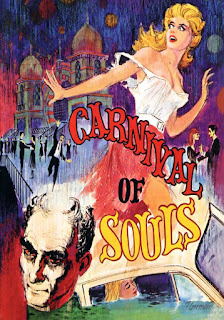 MI: I got involved in the film a long time ago when I got out of film school. A few people including my manager, thought my MFA Thesis film had a tone to it similar to this old cult film called Carnival of Souls. I had never seen the film until my Thesis film was screened at the Tokyo International Student Film Festival. While there, a few audience members, usually older folks, wanted to talk with me about my film as it gave them the same feelings that this old film did back in the early 1960’s, Carnival of Souls. The funny thing was that the non-Japanese people at the fest didn’t really respond to my film, so I guess you could say I was “big in Japan” for a short time. When I got back to the states I made sure I got a hold of CoS (on VHS I believe) and finally watched it. At the same time that was happening, I was stating to work with Peter Soby, Jr. who was at Shoreline Pictures, I believe. He saw my film and the two of us connected right away. As fate would have it, he was involved in getting a sequel to CoS made. So, my connection all kind of came from that. I wrote what I thought was a damn good and faithful sequel and it eventually landed at Trimark Pictures. Well, at least the concept of doing a sequel did. My understanding was that Trimark got Wes Craven interested in lending his name to the making of a sequel and when that happened, well...it’s a common story of how people get their first entry into the business. My friends Steve Jones and John McNaughton told me that you have one choice on how you enter the film business and that is to either bend over or lay down because either way, you’re gonna get screwed. Being from Chicago though, I didn’t take kindly to that so I pursued obtaining all rights to the film as the Trimark pictures sequel was a one-off. Peter Soby and I hired an attorney to do a chain of title on the film to make sure the film was not in public domain, as many people falsely believe it is. The chain came back totally clean and we went directly to Herk Harvey and John Clifford and offered to purchase the negative and all rights to the film.

NF: At that time, did CoS already have the reputation of being a public domain film?

MI: I made sure it was NOT in public domain before I pursued the rights. The film has been floating around for some time with the belief that it is Public Domain but that is just not the case. We have done cease and desist actions over the years because people think it is in Public Domain. There are still those that could care less whether it is in Public Domain or not, they are going to do what they want with what they have to make a buck. Most every dvd, even the “colorized” version are from crappy prints that are not worth watching, IMHO. Peter and I just expected that there are people that will never be convinced that the film is not in Public Domain. Not everyone thinks that way though. A lot of people have approached us over the years asking if they could screen the film at festivals here and there and we almost always grant the request as long as no money is involved because I like to know the film is still being shown and appreciated. It screened at the Louvre a couple years ago and they contacted me before they included the film in their film retrospective. Of course I said yes. I think Herk would be pretty proud to know that his film screened at the most famous art museum in the world.

NF: Do you know where the public domain assumption came from? How did you go about finding the chain of title and verifying it was still protected?

MI: There was a bankruptcy thing that occurred where the distributor closed shop and it was assumed that CoS was part of their library, which it was not. But Herk and John had real jobs and did not have the time to pursue anything legally until interest in the film was revived in the late 90’s. They then did a director’s cut of the film and re-established copyright ownership on the film and story. The negative was being stored at the Eastman House in New York and all other elements to the film were with Herk and John in Kansas.

NF: There are a number of other DVD releases — including at least one colorized one you mentioned — from video distributors that specialize in Public Domain films. When Criterion initially released the film on DVD, were they aware that it was still under copyright protection?

MI: Yes. We made that deal with them originally, but through MPI Media as an intermediary. MPI made an agreement with Peter and myself, and then made a deal with Criterion for a remastered DVD. I provided all the elements for that release and it was done with my full cooperation. Unfortunately I didn’t see a dime from that but I didn’t get involved in CoS to get rich, I got involved because it was a film worth saving and treating with respect and care.

NF: What went into creating this blu-ray release? What was the process like for restoring the film and working with Criterion?

MI: The Academy Archives did the remastering of the negative. And I believe Criterion worked with them on the Blu-Ray. I know the people who did the restoration and they love the film and treated every frame as though it were Citizen Kane.

NF: It's the rare totally independent horror film that rises to the status of curation alongside Bergman and Kurosawa movies. I mean, it's definitely rough around the edges, but the movie seems to sort of rise above. What do you think it is about Carnival of Souls that makes it a standout when so many films of similar pedigree were only at their best when they were fodder for Mystery Science Theater 3000 (RiffTrax has tackled CoS but the movie stands alone - ed)?

MI: I think it was the way it was shot. Herk wanted to make a different film. Different from what most “Hollywood” films were like. I think this helped influence the way it was shot. It really has a weird tone to it. Yes, it is cheesy in spots but it only adds to the overall surreal quality to the movie, in my opinion.

NF: When can we expect Herk Harvey action figures in the Entertainment Earth catalog? Or, what's next for the film?

MI: We have been talking about doing a straight-remake of the movie for some time now. We actually have a couple producers interested. But at this point, I’m like I don’t care to make a schlocky remake for a fast buck; that already happened (Wes Craven allowed his name to be put over the title in a 1999 re-imagining of the movie that should be avoided at all costs. - ed.). If we do a remake it will be something worthy of the original film. Something that is different, weird, creepy, original. Something that would make Herk proud. I don’t have “Fuck You” money but I do have “Fuck You” time. I have been involved in CoS for so long that I won’t do anything with it until the right people come along and want to treat it seriously, like Criterion and the Blu-Ray. We had other offers for a Blu-Ray release but went with Criterion because, they’re like the Cadillac of that particular film market.

Posted by Vance K - cult film reviewer and co-editor of nerds of a feather, flock together since 2012, musician, and Emmy-winning producer.