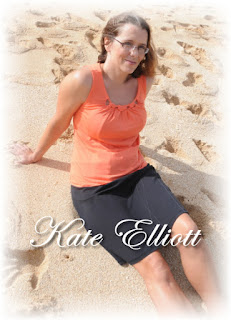 Kate Elliott is the author of twenty five science fiction and fantasy novels and one retrospective collection of her short fiction. Her fiction has been nominated for the Nebula (King's Dragon), World Fantasy (The Golden Key), and Andre Norton Awards (Court of Fives). Her most recent novels are the brilliant Black Wolves, and the first two volumes of the excellent Court of Fives trilogy.

I’m a tag-team reader which means I’m always reading about six books at the same time, but for the sake of brevity I will focus on the Shahnameh, the Persian Book of Kings, by Abolqasem Ferdowsi. This poetic retelling of a prose original was composed in the 10th century by Ferdowsi and became the national epic of Persia (Iran). The story is exactly as advertised by the title: the legendary and historical reigns of various Persian kings. I’m reading it with Tessa Gratton in weekly chapters which we then discuss in a blog post each week at my blog. This September we are reading through the history of Sekander (Alexander the Great). It is fascinating to see how he is portrayed in this version of his story. There are familiar tales told in a slightly altered form as well as completely new episodes not present in the Western history. Also, amusingly, this history claims that Sekander’s father was a Persian king who married a Greek princess. Highly recommended, and very long. We’re reading the Dick Davis translation, done in prose, but there are other versions.

Honestly there are so many upcoming books I am excited about because I really feel we are living in a golden age of sff & YA writing at the moment with more books I want to read than I possibly have time to read. So, having said that, I had the good fortune to receive an ARC of Ken Liu’s THE WALL OF STORMS (the sequel to THE GRACE OF KINGS) and it was fabulously epic. So I’m excited about that (it releases in October) and I’m eager to read book three which I hope Ken is working on even as I type this. Are you, Ken? Is it done yet?


3. Is there a book you're currently itching to re-read?

I don’t have time to re-read. I just have too many books I haven’t read for the first time yet.

I avoid re-reading books I loved when I was young for precisely this reason. While some may hold up, others, I fear, will not, and I would rather not lose my rosy affection for them. For example I picked up Robert Heinlein’s RED PLANET as an adult and almost immediately had to set it down again because of how heavily 50s-USA gendered and acculturated it was.

POISONED BLADE is the second book of the Fives trilogy (which starts with Court of Fives).

The story is set in the country Efea, which was conquered 100 years earlier by a people called the Saroese. Jessamy, our protagonist, is the second of four biracial sisters born to a father and mother who can’t legally marry because he’s Saroese and she’s Efean. The Fives is a game played before large crowds. It’s like a big obstacle course with four obstacles around the outside and a fifth in the center (there’s a greater mystery about the Fives but that is revealed over all three books).

Competing in the Fives is what Jes has always wanted to do (I wanted to write a story about a girl who’s an athlete), but because the sisters have been raised with the father’s rigid cultural expectations she’s not allowed to. In the course of sneaking out to do it anyway she gets caught up in major political intrigue. The story contains generous helpings of my four favorite narrative food groups: determination, love, action, and treachery. Also giant mechanical spiders.

When asked for a pitch, I call it “Little Women meet American Ninja Warrior in a fantasy world inspired by Cleopatra’s Egypt.”