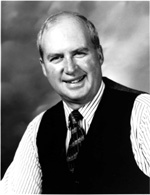 L.E. Modesitt, Jr is the author of more than seventy science fiction and fantasy novels with series including The Corean Chronicles, The Imager Portfolio, Timegod's War, the Spellsong Cycle, The Ecolitan Institute, and most famously, the long running and best selling Saga of Recluce.

Today he shares his six books with us....

1. What book are you currently reading?
Too Like the Lightning, by Ada Palmer.

2. What upcoming book are you really excited about?
It’s not an “upcoming” book, but the next book I’m excited to read is Prospero’s Children by Jan Siegel. I’m always behind in thinking about new releases.

3. Is there a book you are currently itching to re-read?
My favorite re-read is The Collected Poems of W. B. Yeats. I don’t generally have an itch to re-read fiction.

4. How about a book you've changed your mind about - either positively or negatively?
The first SF book I read was Slan by A.E. van Vogt, and I thought it was wonderful at age 12. I no longer do, for a number of reasons, but primarily because I can’t swallow a single individual creating and building a miniature fusion powerplant.

5. What's one book, which you read as a child or a young adult, that has had a lasting influence on your writing?
Collected Poems, 1909-1962, by T.S. Eliot. If we’re talking SF, probably Arthur C. Clarke’s Against the Fall of Night, which I prefer to the revised version, The City and the Stars.

6. And speaking of that, what's *your* latest book and why is it awesome?
My latest book that’s been released is Solar Express, a hard SF novel set in 2114, which deals with the events surrounding an object detected by a post-doc astrophysicist station-keeping a complete observatory on the far side of the moon. The object appears to be a long-period comet, but turns out to be the remnant of a far larger alien space-craft. The book is very hard SF, and is one of only two, so far, approved by NASA to bear the imprint of “NASA inspired” for both the subject matter and the accuracy of the science in the book, ranging from space-travel to cutting edge solar discoveries.

As for upcoming books, I have four coming in the next year and a half – Treachery’s Tools (an Imager book) this October, Recluce Tales (a collection of almost entirely new short stories all set in the world of Recluce) next January, Assassin’s Price (another Imager book) in July of next year, and The Mongrel Mage (a Recluce novel) in November 2017.