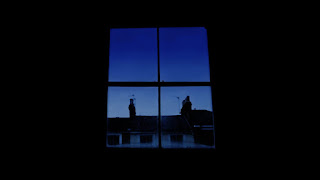 The disturbingly-talented young director Charlie Lyne has followed up his hypnotic and dizzying collage meditation of a film 'Beyond Clueless' with a similar yet even more powerful film. Fear Itself is again a narrated psychological poem over caramel-smooth editing of clips from film after film, some famous, some obscure. His first feature explored teen movies and this time, appropriately for Halloween week, he takes on the subject of horror movies.

However, and frustratingly for those without the access to it, it is a BBC 'iPlayer' exclusive - part of a new wave of programming commissioned just to seen on their UK-only on-demand service. Do look into ways to see this though, as it is a treasure of art and of genre-love.

The director describes the idea best himself on the BBC site. He says: “I got about 20 minutes into the first feature-length commission from BBC iPlayer, Adam Curtis’s Bitter Lake, before I started fidgeting with excitement about what an incredible platform it had become for weird and wonderful art - art that wouldn’t quite fit anywhere else. About a month later I somehow found myself beginning work on Fear Itself, the second feature-length commission from BBC iPlayer. No pressure then. The last six months have been a whirlwind of experimentation, discovery and occasional terror, attempting to make a film that both evokes and scrutinises the effects of horror cinema at the same time. I’m thrilled (and more than a little anxious) to be releasing the film into the wilds of the internet, where it can finally be scrutinised in its own right.”

Narrated by Amy E. Watson, a Scottish-Canadian actor, she plays the voice of a young woman who from the start has clearly suffered an "accident" or mentally-scarring experience of some kind. She explains how she has taken to watching scary films, night after night, and begins to calmly criticise them for their ability and intention to push our psychic buttons. Even as she becomes used to the scare tactics, she never loses the realisation of feeling manipulated, and of still helplessly jumping in surprise, or feeling the cold chill of dread. While her own mystery is never really resolved, her dreamy, wandering, near-poetical ruminations on cinema and more so on fear itself (see what I did there...?) allow Lyne a wobbly, fractured template on which to bind an endless flow of mainly silent clips from horror cinema's greatest moments.

Some clips were familiar to me but a delightfully high percentage of the footage and the films it is from were new to my eyes, and like a more 'standard' documentary on film, it inspires you to seek out the films in question (although I often find the clips give a false impression of a better film than really exists, misleading like a slick trailer can also do). Don't Look Now, Peeping Tom, The Exorcist, Psycho, Ringu (probably still my all-time favourite), and other classics feature, but also more cult greats, like Tetsuo, Scanners, Altered States, Lost Highway, La Casa Dalle Finestre Che Ridono,  and films I have never heard of before, all merge into one long trip of a montage. Also included are films that one wouldn't label 'horror' at all, like Alive, Enduring Love (one of my favourite scenes in all literature, and then cinema, plus - Bond in glasses!) and Gravity (bloody spoiler alert in that case - thanks Lyne for ruining the ending for me!) but help serve the script's thoughts on human fear and terror.

After a while (the film is almost 90 minutes long), the script and Watson's childlike gentle voice begins to tire, and I found myself watching this over four separate sessions. Yet I'm sure with a free evening on the sofa and a box of Colorado special cigarettes, a full immersion would be far more powerful.  Another criticism is the occasionally too-literal moments of narration that caused the wrong kind of laughter from me ("The last time I felt that kind of fear, I was watching a film with Liv Tyler in it" - The Strangers is a pretty good film but, jeez that is a bit crap). Some of the clips, shorn of the deeper meaning of the film they are from, just amused and interested me, like when one is in a cool bar or club (well, I imagine - I haven't been to one for a while!) and there is some cult film on in the background. But freed perhaps of the restrictions of being broadcast on the main network, Lyne also includes some truly gruesome body horror, and some very unsettling sequences. Along with the overall hypnotic power of the quiet, clam narration, I found myself lost in its web, and thinking myself about fear and how true terror works in my own mind. As such, this manages to be one of the most bleakly disturbing pieces of TV I have seen in a long time, and can there be any higher praise in the days leading up to All Hallow's Eve...?

Bonuses : +1 for making me want to seek out new films that I never knew existed
Penalties: -1 for the occasional mask-slip of the narration, which can never hope to keep its spell over 90 minutes

Nerd Coefficient : 8/10 "totally worth your time and attention"

posted by English Scribbler, scream queen and contributor since 2013