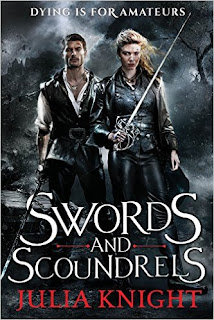 Swords and Scoundrels is a swashbuckling tale about sibling duelists Kacha and Vocho who have been excommunicated from the guild and now make a living as highway-persons. But in a job that almost went wrong, they are faced with a blast from the past, a powerful magician, and large locked chest. Vocho hopes the contents of this chest will win back their favor with the guild, but it ends put putting them right in the middle of a political plot to resurrect the powers of old.

The imagery created in this story is fantastic. Kacha and Vocho don large, feathered hats, cloaks, rapiers, and pistols. The world created is imaginative and exciting, particularly Reyes, the city that our protagonists hail from. There has always been something magical about clockwork, and Knight brings that alive in Reyes. The city is built on gears and cogs, in worship to the recently reborn Clockwork God, and the city itself literally moves around the famed Guild headquarters, but no one knows or remembers why, since the clockwork is as old as the city and dates back to prehistory. Reyes is a port town, and in a stroll through the docks we are introduced to the many diverse races inhabiting this world. This world building is rich, but it comes at the price of much infodumping, though I mean that in the least pejorative sense of the term.

And while the world is complex and imaginative, the story is rather lackluster. It holds one of my most hated media conventions, "The Lovers' Ruse." This is the one where the guy has some ulterior motive for dating the girl, like money or info or whatever, but then actually falls in love with her but continues to perpetuate the ruse, and then she finds out and dumps him and we the audience are expected to feel bad for this guy. Swords and Scoundrels takes place after the guy gets “unexpectedly” dumped by Kacha (who was told of his plan to court her for information on the guild) but she spends the majority of the book lamenting about him and how much she loves him anyway because he's the opposite of her brother and barf. We don’t need any more female characters that are still mooning over someone they know has deceived them, tricked them, and used them for personal gain. This is a tired trope.

The story also suffers from long and unnecessary (in my opinion) flashbacks. They come in the form of “interludes” every other chapter or so and tell the story of the main characters as children entering the guild and training. While this is all interesting and could serve as a separate story somewhere else, it just doesn’t fit here. These interludes occur too frequently, are rather dull, and simply are interruptions that do not add much to the plot at hand.

But the world is so exquisite and I would love to see it visually represented. Honestly, I think Disney should make this a movie, but (in a perfect world) nix the lovers' ruse.

Bonuses: +1 for overall world building, +1 for Reyes in particular

Penalties: -1 for Kacha’s constant lamenting over Petri, -1 for the interludes

Nerd Coefficient: 6/10 “still enjoyable, but the flaws are hard to ignore”