Just to lay my cards on the table, I was  excited about the chance to read Willful Child, Steven Erikson's goofy and light-hearted parody of Star Trek. After all, what can be more awesome than a parody of Star Trek, told by the Master of Malaz?

My excitement for this novel partly owed to the fact that I grew up on Star Trek (The Next Generation, but I worked my way back to the original series). But more importantly, it owed to the fact that I am a big fan of Malazan Book of the Fallen co-creator Steven Erikson. Erikson is a funny guy. Damn funny. Even his funny bones are funny. I can't remember reading anything (in recent memory, at least) as laugh-out-loudtastic as Midnight Tides, the fifth volume of his Malazan series. His critique of capitalism and his story of the destruction of the Letheri economy, told through the eyes of the comedic duo Tehol Beddict and Bugg, is pure comic genius. But what makes his sense of humor shine is that his characters' silly quips and hilarious conversations punctuate the exceedingly dark mood of the series. Comedic grimdark? Whatever the case, Erikson succeeds in lightening a brooding, dark tale in a way that few other writers can.

So I assumed that if anyone could do justice to a parody of Star Trek, Steven Erikson could. Even before picking up the book, I had imagined Tehol Beddict, Bugg, Iskaral Pust, Bauchelain, and Korbal Broach fighting in the bridge of Galaxy Quest. What could be more entertaining?

Quite a bit, actually. Perhaps my expectations were too high. Certainly, Erikson hasn't lost his comedic sense. He writes quips, jibes, and funny jokes with verve that I have found lacking in the genre. Willful Child made me bust out laughing a number of times. But over time his jokes started to wear thin, and I found myself losing interest in the story. I will get back to this point later in the review. Just to give you a sense of the type of humor in the book, here's a quick example...


"What is that?" Hadrian demanded.

"Extreme magnification, sir! I think it's a thruster!"

"Back off a few stops, will you? I think my retinas are on fire."

Willful Child, true to Star Trek form, features a plot composed of multiple episodes. In this context, the book's overall structure feels somewhat similar to John Scalzi's Redshirts. Where they differ is in the careful attention Erikson always places on Captain Hadrian Sawbeck, the hero of the story. No other character (outside of Tammy, the rogue AI that commandeers Sawbeck's ship) receives similar attention. Sawbeck is man who has the intelligence, good looks, and daring of Captain James T. Kirk and the morals, personality, and sense of responsibility of Futurama's Zapp Brannigan. 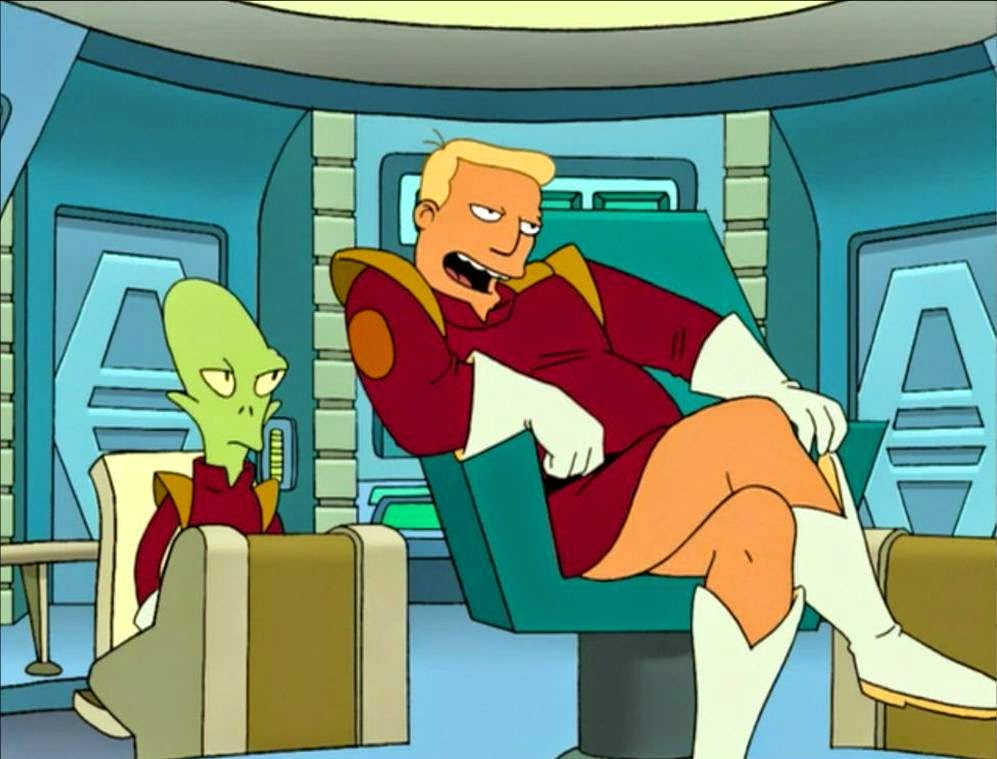 On the one hand, Sawbeck can be both intelligent and daring. But at the same time, he is more often narcissistic, sex-crazed, and has a penchant for downright stupidity. He chooses many of his bridge officers based on their buxom proportions, and spends a great deal of time trying to get into their pants (and when he is unable to, at he spends the rest of his time mentally tearing off their clothes). He has no qualms about committing acts of genocide against lesser species. He assigns as his chief of security the Varekan Galk, a nihilistic man who cares little if he lives or dies, and who always chooses the worst possible weapon for his away missions. At least that keeps life interesting--and Sawbeck would rather go out in a blaze of glory than at home surrounded by his loved ones. And he has ample, humorous opportunities to do so on away missions. Here is an episode from one such mission, where pretty much everyone neglected to bring mission-appropriate weapons:


The captain then turned to Galk. "My, that's an impressive piece you've got there. What is it?"

"Outstanding, Galk. What does it shoot?"

"It doesn't shoot anything, sir. It stops anything from hitting me."

"Don't let it bother you," Hadrian said, turning to his two security officers. "As you can see, my security detail here... well, one of them's wearing a rapier and the other one appears to have a camera."

The woman with the camera strapped round her neck stepped forward. "It's rapid fire, sir."

Although Sawbeck is noticeably sexist and has an over-the-top machismo found in the original Star Trek as well as 1950s science fiction writ large, Erikson uses this machismo as a way to poke fun at the space opera genre. The sexism, after all, is often times self-referential. Female characters frequently note that they would not be the target of such sexism were they male. And Sawbeck even has a unique chance to see the world from a woman's viewpoint (not that this would change his worldview in any way). Thus, sexism and cultures of machismo serve as part of Erikson's larger comedic arsenal, to be used and abused to parody the genre as a whole.

Erikson also hits directly on problems in today's society, from narcissism and apathy to rampant consumerism. It is about consumerism that he waxes most eloquent:


"You are suggesting, as  understand it, a contracted existence, whereby inactivity is encouraged, via a pan-universal shopping network."

"Exactly. Buy at the click of a button. I can envisage individual Plog big as planets. Just bear in mind the no-return policy."

"Such an existence," the Plog captain mused, "invites drooling apathy, the proliferation of reactionary, stupid opinions and beliefs, a denigration of educational standards, a facile adoration for fads and glam, and an appalling ability to weather the most inane salesmanship imaginable. It is hard to envision a civilization such as the one you describe, Captain."

"Hardly. I invite you to peruse Terran history files..."

It is clear that Steven Erikson loves Star Trek, and it is also clear that he had a great time writing this book. Even the overall storyline is a wild ride through the galaxy. Sawbeck gets promoted to Captain after solving the Mishmashi Paradox... and within the space of a few days he commits genocide, loses control of his ship to a rogue AI, travels through enemy space and initiates conflicts against a few major species. All of this Erikson writes with verve and flair.

But as much fun as the book is, it still falls flat. The The humor soon grows old, and without it the story lost its grip on me. It was not balanced by sufficient plot twists or a grimdark-esque environment necessary to keep the reader's attention. This is why the comedy of his Malaz world works so well. The humor provides a much needed break from the dread, the violence, the danger, and the agony that is life in Malaz.

Willful Child, in the end, was a funny but all-too-forgettable ride through Erikson's vision of the Star Trek universe...

Bonuses: +1 for classic Erikson humor; +1 for the Plog

Penalties: -1 for the humor becoming tiring midway through the book; -1 for no real plot twists or anything else to keep my interest.