Microreview [comic]: Heir to the Empire by Zahn, Barron, Vatine and Blanchard

A comic adaptation of the "true" Episode VII 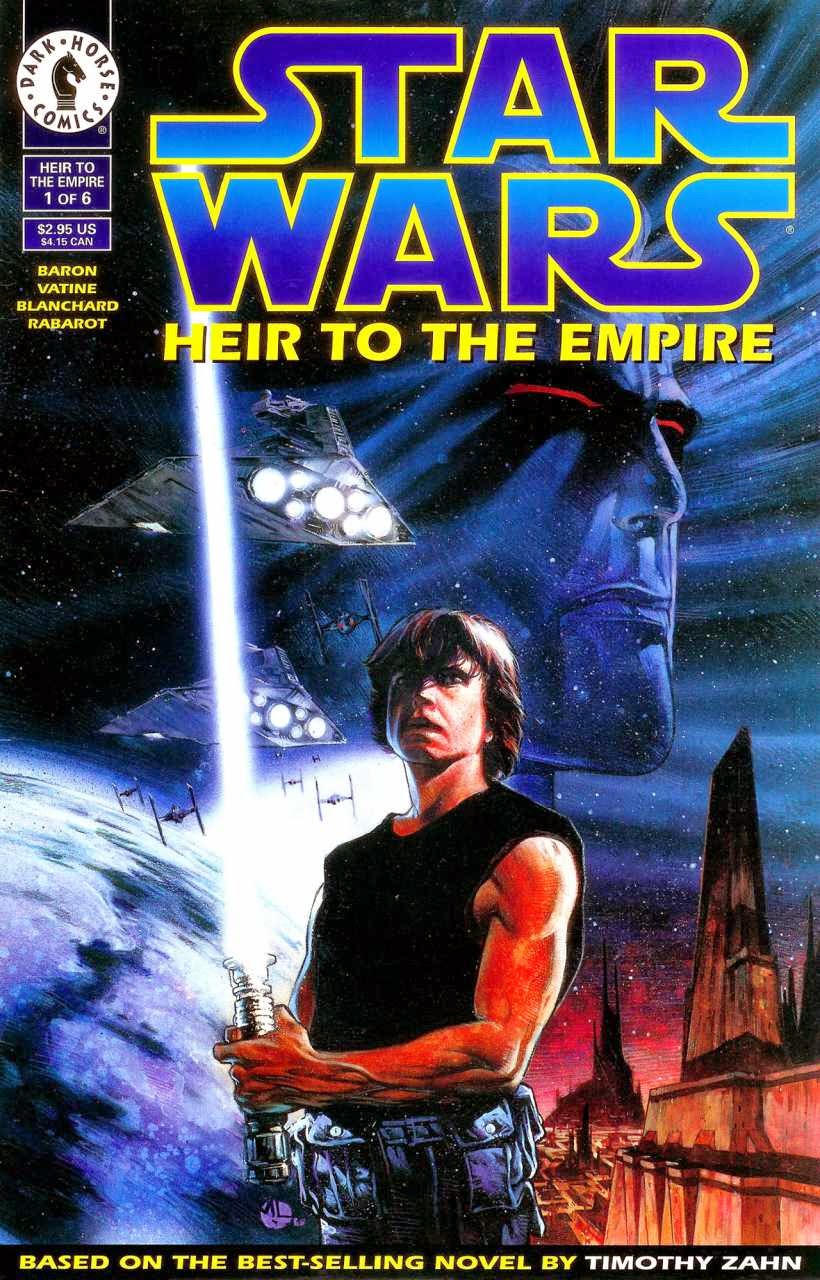 With the impending death of the Star Wars Expanded Universe, it felt appropriate to dip back in one last time and see if the prospect of absence can make the heart grow fonder. See, in my experience, most Star Wars novelizations and comic adaptations range from mediocre to objectively terrible. But back in the 1990s, a certain science fiction writer named Timothy Zahn actually penned three novels that were a lightsaber cut above. So I figured to give Heir to the Empire a re-read. Only this time I'd be reading the 1995 comic adaptation for the first time! I have i09's Rob Bricken to thank for the idea:

After the cartoons of the '80s and toyline died done, there was nothing Star Wars until Timothy Zahn's 1991 book Heir to the Empire, which rekindled interest in the movies and helped get us to where we are today. The story was about an imperial admiral named Thrawn who led the remnants of the Empire against the new Republic; it wasn't perfect, but it introduced a bunch of characters who became EU mainstays — and more importantly, it felt like the movies (sometimes, a little too much). For the best experience, read the trilogy on graphic novel — it's a Star Wars story that needs to be seen, not just read.


At the time I thought: "okay, Rob, I'll see it and read it!" But now that the seeing and the reading are done, how was it? The answer: cool and 90s and fun and very much not perfect, but still probably the best skeleton left in the Expanded Universe lichtyard.

Heir to the Empire tells the story of Luke, Leia, Han, Chewbacca and the rest some time after the events portrayed in Return of the Jedi. The New Republic is now the preeminent polity in that galaxy far, far away--though it's short on institutions and is apparently governed by an executive council consisting of Leia, Admiral Akbar, Mon Mothma and some smarmy dude whose name I can't remember. And the remnants of the Empire are still out there, licking their chops.

Enter Grand Admiral Thrawn, a blue-skinned genius with a temperament more like Grand Moff Tarkin than Darth Vader or Emperor Palpatine. He'll use violence when it's functional and won't lose sleep about it, but he's neither a true believer in the Dark Side nor the kind of egomaniac prone to making rash or impetuous decisions. Like a good chess player, he knows the value of a good feint and is always planning several moves in advance. That's what makes him so dangerous--that and the fact that he's found these lizard-like creatures, called Ysalamiri, that are Force-deflective. So when he sets a trap for our heroes, things quickly go from bad to worse...

Heir to the Empire sits on its perch atop the pile of Expanded Universe fodder because it manages to capture everything you love about Star Wars (assuming that you, as a rational being, do at least secretly love it) while introducing new characters and situations that feel as if they fit right in. In fact, Heir to the Empire is everything The Phantom Menace should have been but wasn't: high on action, intrigue and characterization; and low on racist caricatures and kids who can't act for shit. And nearly all the new characters have depth and complexity: Thrawn and his trusty sidekick Captain Gilad Pellaeon, former Imperial assassin Mara Jade, who has it out for Luke; the roguish smuggler king Talon Karrde; and Jedi Master Joruus C'Baoth, whose motivations are always more than a little opaque.

Perfect, though, it is not, and the comic adaptation unfortunately amplifies some of its issues with pacing and combat (Imperials remain largely cannon-fodder, despite possessing better armor, training and weaponry). But in general this slice of 1990s Dark Horse goodness amps up the cinematic qualities of the original novel. In a good way. So if anticipation for Episode VII has you jonesing for some Star Wars, the comic adaptation of Heir to the Empire can give you the fix you need.

Bonuses: +1 for Expanded Universe content that doesn't actually suck; +1 for being oh-so-much-better than the execrable prequels.

Penalties: -1 for the Expanded Universe is dead!; -1 for yeah but the prequels became movies and now this never will.