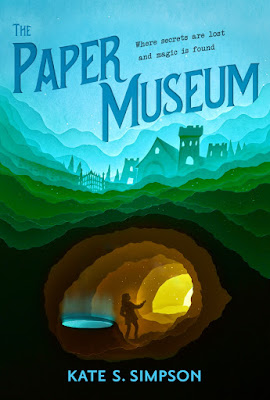 Young Lydia lives in a future where paper is obsolete (why?) and everyone uses a tiny portable computer that can be worn on the hand as a ring. Her family runs the last place (in the city? in the world?) that still keeps paper, a museum whose real function is about much more than preserving the printed word. She's happy to spend every day browsing those pieces of history (where are schools?), which sometimes contain ancient, inexplicable symbols like # and &, that have gone out of use (how?) and lend an air of mystery to the relics she lives with.

But one day, her parents vanish (what do they even do?) and Lydia, desperate to find them, files a report with the city government, with the unexpected consequence that, if her parents don't show up, the city will take ownership of the museum (who in their right mind approved that law?). Now Lydia must solve the case of her missing parents before she loses her home too (but what does that mean if we don't know how the rest of society works?).

The Paper Museum is a frustrating read. The microcosm inside the museum is described in abundant, at times excessive detail, while the world outside of it is a nebulous blank that may as well be made of air. Since we only follow Lydia, who basically never leaves the museum, the significance of a world without paper is lost because we never get to see that world. Her quest to locate her parents (and thus the reader's interest in the plot) is interrupted by the arrival of an uncle whose personality stops at "grumpy because reasons," and the duty to train new interns who happen to come to work with Lydia at this same time. Much is made of an ominous "mayor's initiative" that somehow threatens the museum, but neither the initiative nor the nature of the threat are explained. Days pass without anything really happening because the plot needs to give Lydia time to get to know the interns, but the importance of these characters in the final resolution is at best tangential (one of them is more than they claim, but even that one is underwhelming).

It's a pity that so much opportunity for wonder and excitement is wasted here. The idea of a sheltered place dedicated to preserving paper is immensely interesting, but hardly anyone visits the museum, so we don't learn what the place means to the people of this future. The educational system in this society is clearly different from ours, but we only get the barest essentials to explain the plot, so we don't get a sense of what our young heroine thinks about her prospects in life and her place in the cultural scene. This novel is made of concrete events without a context, written with a hyperfocused lens covered with blinkers. Only Lydia and her immediate interactions matter.

At some point we're told that this is a world that has banned magic, and part of Lydia's quest to find her parents is about rediscovering magic, but again, we're missing the why, the how, the when. The use of a narrator restricted exclusively to Lydia's thoughts and interests may be intended to reflect how little a child really understands about the larger world and the big picture, but what little remains in view is not solid enough to sustain a story. Lydia herself is a painfully generic character, and the rest of the cast is consistently one-note. Her best friend is gentle (and nothing else), her uncle is harsh (and nothing else), the mayor is malicious (and nothing else). When Lydia figures out the clues to where her parents went, we just have to trust that she got it right, because we're not even told enough rules about the magic to follow her reasoning or feel any anticipation about her solution.

There's undeniable potential in this story that could have been fulfilled with more rounds of revision and polishing. This is a novel with plenty of material to spark curiosity, but nothing to satisfy it.

Penalties: −1 for less than barebones worldbuilding, −1 for overly simple characterization.