Review: Eyes of the Void by Adrian Tchaikovsky 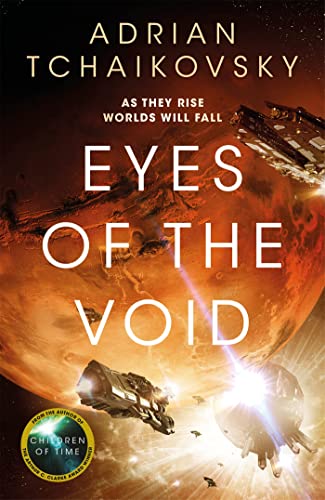 In the first book of the Final Architecture series (which I reviewed with high praise last year), the fearsome Architects, alien megastructures capable of destroying planets and responsible for humankind's current state of cosmic homelessness, had suddenly returned, and the only countermeasure that was useful against their uncaring advance—the mysterious ruins of a long-gone civilization—appeared to have lost their repellent effect. The only hope that remained was the telepathic power of the Intermediaries, surgically altered humans with the ability to perceive the layer of unreality beneath the fabric of spacetime. But the surviving Intermediaries are now aging war veterans, and the Architects will not listen to newly-made Intermediaries who have undergone the cerebral torture against their will.

So our revered hero Idris Telemmier, member of the original slate of Intermediaries, twice savior of the known civilizations and very much tired of it all, is the most prized weapon in the galaxy. And everyone wants to get their hands on him. The early chapters of the novel consist of a relentless pursuit, full of spy games and secret agendas, because each faction calculates that gaining control over Idris will give them the key advantage against the Architects and, ultimately, against the rest of intelligent species. The balance of power in the galaxy is precariously volatile, the return of the Architects has put every major government on maximum alert, and Idris just wants to be left alone. As soon as he's done training a new group of Intermediaries (who, he emphatically insists, must be free volunteers or else their powers will be useless), he's ready to retire and forget about wars and politics and the fate of the universe.

Alas, the universe is not done with him. True, most factions want to steal him as a weapon, but he's also useful as a seer, an irreplaceable channel of communication with whatever dark purpose the Architects are working for. As the plot takes our crew of protagonists aboard the salvage ship Vulture God through more and more elaborate ruin sites, Idris gradually begins to sense the true relationship between the material universe and the void of nonexistence where the Architects live. And the answers are irresistible catnip to his altered brain (and, to be frank, to the reader).

Whereas the first novel in the series, Shards of Earth, felt like it was inspired by Hegel's Phenomenology of Spirit, in that it explored the tango of attempted negations inherent to any contact between two conscious entities, this new entry appears to take after Sartre's Being and Nothingness and its exploration of how important conscious thought is as the condition of possibility for negation. In other words, the concept of "not" only makes sense to a mind that can reflect on being. Once you start classifying the world according to categories, you notice negative space around each being: the attributes that make a cup a cup are the same that make it not a penguin. To be something is to not be everything else. But it is only through a thinking mind that this abundance of nonexistence is even possible. The world doesn't get filled with negations until it gets defined. Without a mind to impose categories, one arrangement of atoms would be as good as any other. It wouldn't matter if Earth were a livable place or a twisted wreck of magma. That is why, in the first novel, the world-warping Architects only retreat when they realize that we do care about arrangements of atoms. It is our consciousness which bestows the universe with meaning. It is our consciousness which distinguishes between things, and within that distinction lies our most terrifying creation: the "not." To even begin to make sense of the world, to apprehend it, requires us, in a way, to surpass the realm of the real and reach into the nonexistent. This is what Hegel terms, and Sartre quotes, as the role of an Intermediary.

In the setting of Tchaikovsky's Final Architecture series, FTL travel is performed by Intermediaries who guide the jump from the real universe into an empty nothingness folded into routes. (Here we have to come back to Sartre, who defines physical distance as a negation of contact, and the destination as a negation of further movement.) In stunningly poetic passages, the novel describes the negative void between things as the very fabric that links them and holds them in place.

In the unspace postulated by Tchaikovsky, intelligent minds intuit a lurking presence, contact with whom would be absolutely intolerable. To put it in Sartre's words, "nothingness haunts being." But conversely, conscious thought is the only thing that has an effect on unspace. If, following Sartre, nonexistence is incapable of sustaining itself, it's even possible that Tchaikovsky's unspace didn't begin to exist until intelligent species emerged in the universe (we'll have to wait until the conclusion of the trilogy to find out whether this speculation holds).

Here we may find a clue to decipher why Tchaikovsky's characters suffer an intense state of anguish while in unspace. According to Sartre, the human attribute that brings the "not" into the world is freedom, the possibility of making a choice (because each choice comes at the cost of negating other possibilities). And it is precisely the infinity of all the negated possibilities that makes us feel anguish upon being aware of our freedom (this is Sartre quoting Kierkegaard) or, indeed, anguish upon being aware of the nothingness (this is Sartre quoting Heidegger). The human mind collapses under the weight of everything it could be and is not.

The arc that Idris follows in this sequel is a fascinating one: he yearns to retain his freedom, both legally and morally speaking, from any of the various governments that are making unabashedly obvious plans for war and would love to acquire his services, but the lure of the truth about unspace keeps dragging him back to the wrong places, where he's wanted by all kinds of the wrong company. For all parties involved, this is a basic fetch quest: to get Idris by whatever means, rinse and repeat. But Tchaikovsky never lets it get boring. A clandestine auction of stolen government data quickly erupts into a shooting match plus murder mystery; a routine pilgrimage to a holy site is interrupted by cataclysmic weapons that laugh at the laws of physics; a simple interview at a university ends with a nail-bitingly tense chase and a ritual duel; a search-and-rescue operation leads to a four-way starship standoff over an ancient planet with lethally resplendent flora. Each of these scenes is built with an almost cinematic eye for the combination of intense pacing, truly alien setting, and meaningful stakes that makes every piece of the puzzle matter.

And I still haven't mentioned the rest of the cast: the robot archeologist Trine makes a return, with their unmistakable snark; the clone soldier Solace is as torn as ever between her patriotism and her personal sympathies; the sharp-tongued Kris gets much welcome development; the alien arthropod Kit continues to provide the pragmatic viewpoint with exactly as few words as necessary; and the foulmouthed Olli is still the best representation of a disabled badass I've seen in ages.

Eyes of the Void is all the best things about space opera: political machinations, unlikely alliances, shady cultists, body augmentation, literal world-shaking enigmas, extradimensional shenanigans, deep philosophy, and lots and lots of pew-pew. It provides more than enough answers to reward the extensive journey, but keeps the best ones carefully hidden for the upcoming conclusion.

Bonuses: +1 for expertly holding the narrative rhythm like a music conductor.

Penalties: −1 because the political machinations in the early chapters are a bit too hard to follow at first.