Welcome back, dear readers. Today we’re going to revisit the seventh novel in Seanan McGuire’s October Daye series: Chimes at Midnight. We are now almost halfway through the published novels (2021’s When Sorrows Come is Book 15), which means we still have a long way to go but we’re also fairly deep into the series with big events occurring almost every time we turn around.

We assume you’ve been reading along with us because this will be rife with spoilers for past books and likely also for future books. You have been warned. 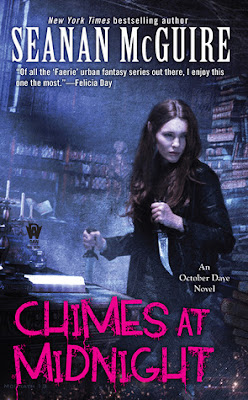 Not to start out with a negative, but one of my least favorite / least enjoyable aspects of the series is goblin fruit. I find the addiction plots somewhat tedious and don’t enjoy reading about it - which makes what Seanan McGuire does in this series all the more remarkable because even as I don’t appreciate the storylines of these few novels with the goblin fruit, I still love reading the novel - just perhaps not as much as the rest of the series, or maybe it’s also that every part of Chimes at Midnight that focuses on everything else is what works for me.

Here’s the basics of Chimes at Midnight: Goblin fruit is back, Toby wants to get it off the streets, brings it to the Queen of the Mists and finds out that not only does the Queen not really care about the impact of goblin fruit on changelings (it addicts and kills) she is helping facilitate the importation of the goblin fruit trade into Mists / San Francisco. Not too much after this revelation, Toby is banished from the Mists and has 3 days to leave before her life is forfeit.

This naturally leads to a plot to overthrow the Queen of the Mists because of course it does. As one of the more interesting things, I don’t believe we ever learn her name. We know everyone else’s names and their heritage. Heritage is important. Bloodlines are important, even beyond the prejudices about changelings / part human fae - what race a fae belongs to is important, at least to those who truly care about that sort of thing, but it is also part of identify. The Queen has been passing herself off as the child of King Gilad, who died in the 1906 San Francisco earthquake and she’s not the true heir of Gilad but without a real challenge it’s just something that has been forgotten about. I do wonder if we’ll ever learn the Queen name (spoilers, we still don’t know it through fifteen books). I assume the only reason we don’t know it is because it matters.

One day I’d like to get a full and detailed explanation from the Luidaeg about how / why she is prevented from telling Toby particular things. There’s the gaes on her because to not harm the descendents of Titania but this is different.

In this instance, one of those things is Arden Windermere, the actual daughter of Gilad. Arden has been in hiding for more than one hundred years. Arden was hinted at before, but boom, it’s time to bring Arden out of hiding.

Midway through Chimes at Midnight, the novel begins to rush headlong to the end. It races. The pacing is just incredible. During her quest to overthrow the Queen and restore Arden to the throne, Toby is hit in the face with an “evil pie” - which is goblin fruit, so Toby ends up addicted and besides being a race to overthrow the Queen, it’s a race for whether she can survive long enough to get Arden on the throne.

This would be one hell of a grim ending to the series if Toby doesn’t pull through and fails to restore Arden to the Mists and, spoilers - Toby is fine, the Queen is deposed, and Arden is the new Queen. There’s not exactly a happier ever after in this series, or perhaps in faerie at all, but it’s a huge game shaking win that, as always, has Toby on the edge of death before pulling through.

Chimes at Midnight has the first real betrayal of Toby by Sylvester after Toby is hit in the face with the Evil Pie and is tended to by Sylvester at Shadowed Hills and he neglected to let May and Tybalt know where she was and what had happened to her. There have been a couple of minor quibbles, but this is a case where doesn’t respect Toby’s wishes above his own fears and pays for it. It begins a deeply unpleasant period in their relationship which still continues through the most recent novels.

Chimes at Midnight is also the novel where we find out that Quentin is actually the Crown Prince of The Westlands - the High Kingdom in charge of all of North America (which, I assume also includes Mexico in this world, though I don’t believe we’ve interacted with anything south of the border - but then this series has been very focused around Mists and San Francisco).

There have been hints that Quentin is somebody important, beyond just his blind fosterage at Shadowed Hills with Sylvester, but the level of importance is more than Toby could have imagined.
Last random thing is that this is the book that introduces the Library - a supremely cool catalog of everything fae (that they could get sourced) that we probably don't spend nearly enough time in even though it doesn't make sense for Toby to spend two books doing nothing more than just giving us tidbit from the Library. We probably get as much of the Library as we need, which is always less than we want. That's probably as it should be.
Open roads and kind fires, my friends
Previous RereadsRosemary and RueA Local HabitationAn Artificial NightLate Eclipses
One Salt Sea
Ashes of Honor
Joe Sherry - Co-editor of Nerds of a Feather, Hugo Award Winner. Minnesotan. He / Him
Posted by Joe at 12:00:00 AM