Microreview: A Strange and Stubborn Endurance by Foz Meadows

Foz Meadows weaves a tale of healing and self-worth amid this political murder mystery. 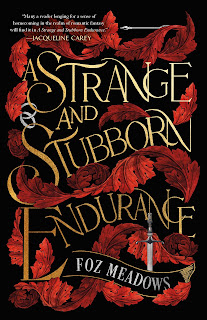 When Velasin is called to his father's estate, marriage is the last thing on his mind. That soon changes when his father announces Vel's impending engagement to the princess of the neighbouring kingdom Tithena. This alliance is placed in jeopardy when Vel's father and the Tithenai ambassador catch Vel in a compromising position with his male ex-lover, but the situation is soon resolved by engaging Vel to the prince instead of the princess. However, Vel's father is disgusted by his proclivities and makes it clear he will never be welcome back. Thus Vel finds himself exiled to a foreign country and unsure of whom to trust when it becomes apparent someone might be trying to kill him.

There was much about A Strange and Stubborn Endurance that put me in mind of Winter's Orbit: a gay romance featuring a political marriage, a protagonist coming from an abusive relationship who is isolated in another culture, and a bigger mystery at play. I did not love Winter's Orbit, so the comparison worked in favour of A Strange and Stubborn Endurance, which I felt handled several aspects rather better.

It does this by being very clear about the kind of story that it is: a story of healing and self-worth. Although it alternates between points-of-view, Velasin's sections are written in first person and Caethari's in a close third person. This makes it very much Vel's story, allowing us to fully experience the complicated emotional journey he's going through.

In order to get to the healing we must first go through the trauma. The story carries content warnings for sexual assault and attempted suicide, among other things. In fact, there's a handy list under the author's note at the start, which I very much appreciated; being a story that foregrounds healing, it's not looking to play gotcha with readers' triggers.

Many gay romances can be light on female characters, but this is an obstacle the book manages to avoid. Cae's sisters and grandmother play prominent roles; the army commander he serves under is also a woman and women are well represented in the guard. On the other side of the border, this is less pronounced, but still present. In the wake of Vel's assault, there is a lovely exchange between Velasin and his step-mother, Lady Sine. Although she is happily married to Vel's father, she is also no stranger to the realities of sexual assault and arranged marriage. She is the one person who can understand what Vel is going through and does her best to provide comfort within the limits of her power.

There is also space made for non-binary characters. Tithena recognises them as a third gender referred to as kemi. The Tithenai ambassador is kemi, and while the role they play in the story isn't necessarily a huge one, it's also one that continues long after they return to Tithena with Vel.

This brings me to something of a criticism of the worldbuilding: the treatment of the nations was rather uneven. Caethari's Tithena recognises three genders, accepts same-sex marriage and transgender people. The food is excellent (according to Velasin). Divorce is permitted and consent is an important part of marriage contracts. In contrast, Velasin's Ralia has all the unattractive features of English-based medieval fantasy: arranged marriage, women as chattel, same-sex relationships censured by religion and society (though not outright illegal), and bland food.

Similarly uneven was the treatment of former lovers. Both Velasin and Caethari have exs who appear in the story. Velasin's ex, Killic, is a nasty piece of work who sexually assaults him on the page, then stalks him and attempts to gaslight him. In contrast, Caethari's ex, Liran, is utterly charming: a trans man of colour who is a painter and a deeply intelligent individual who welcomes Vel warmly.

This unevenness arises from its purpose as a story of healing; Vel literally moves on to a better place. Unfortunately, it undermined a little of the story's credibility for me, leaving it feeling a bit like wish-fulfilment.

And this does overlook the fact that someone (or a group of someones) is trying to kill Velasin. In fact, the story becomes something of a murder mystery. First Vel's party is attacked by bandits as they cross the mountains between the nations. When they arrive at the city, someone attempts to assassinate Vel and ends up stabbing his friend Markel instead. From there, the bodies begin to pile up. The mystery was largely well handled, but while I wouldn't say the culprit was obvious exactly, the story could have benefitted from a few more serious suspects.

Before I go any further, it is egregious that I haven't yet introduced Markel properly. He is Velasin's valet and friend. He is also mute and communicates through sign language. The relationship between Vel and Markel is truly lovely and built on mutual respect. Both have been there for each other through difficult times. It's a bit of a shame that Markel tends to be side-lined once the pair arrive in Qi-Katai to make way for the developing relationship between Vel and Cae. However, his obvious shipping of the pair is quite charming and I was delighted to see the character was allowed to be a bit of a ladies man himself.

Speaking of Vel and Cae's relationship, the pacing of it works nicely. They become friends reasonably quickly. The romance takes longer, which is fitting considering Vel's experience and culture. I was relieved that the story avoided the miscommunication that so characterised Winter's Orbit (and many other romances). In fact, I was surprised at how early Vel confessed his sexual assault to Cae, but it allows the story to move on to the healing which is the focus.

Overall, while I felt it had some weak points, A Strange and Stubborn Endurance was a delight to read.

Bonuses: +1 for being clear what it's about, +1 for lack of miscommunication