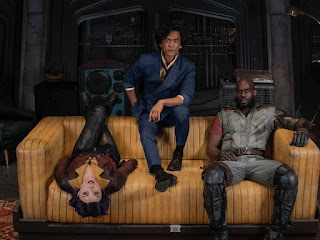 It isn't quite time to share my holiday gift guide for the season so I am switching it up a bit and sharing my thoughts on the live action Cowboy Bebop that hit Netflix in November.  My son and I have been on a huge anime kick and it was a delight to share this anime with him and we were hyped as Netflix teased images and trailers.

As someone who watched the anime back in my college days and revisit it on an annual basis, I have grown fond of the characters who are the soul of this series.  Whoever was in charge of casting, with one minor exception, hit this one out of the park.  While John Cho is older than Spike, he looked the part, sounded the part, and was everything I wanted out of a live action Spike.  As good as Cho is as spike, Mustafa Shakir is the living embodiment of Jet.  His raspy voice was spot on and he remains a gentle giant that might be my favorite character in the series. Danielle Pineda was a phenomenal Faye and I am thankful they revamped her costume than the fan service her animated character provides.  This trio carried the series and did some very heavy lifting.  The one sour spot from the cast was Alex Hassell's portrayal of Vicious. He felt flat and was a forgettable villain which is unfortunate.

The sessions themselves were fine and there were a lot of great nods to the anime sprinkled throughout.  I am happy that it wasn't a straight adaptation of the anime, but some of the choices detracted from the overall story and the action scenes felt too choreographed and heavy compared to the show. I appreciate that they wanted to develop the characters at a faster pace than the anime, but it didn't click for me and felt out of place and contrived.  There were other odd choices that made the series more adult than the anime and they didn't work out juxtaposed against the campy humor that the series enjoys.

There was also a severe lack of Ed in the series, and I know that they don't appear until later in the anime, there was a notable absence and their inclusion early on would have been a bonus and one that fans would have enjoyed.  Overall I feel that the adaptation is a big meh.  The cast is delightful and there were moments that truly shined, but in the end it felt forced and lacked authenticity.  If the crew is back for another season I will check it out and root for the underdog, but my expectations will be low.

Bonuses: +1 for an amazing cast outside of Viscous

Penalties: -1 for not giving us enough Ed