Microreview [book]: Beyond the Hallowed Sky by Ken MacLeod

The start of a new series by Ken MacLeod, in a future where aliens, secret FTL travel, and time travel may all shake the future of humanity. 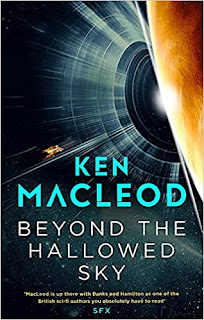 Lakshmi Nayak has a problem. She lives as a student in 2067 London, part of the Alliance, one of the two major world powers. And she has just received an envelope with equations on it. Equations that don’t just imply, but baldly state that faster than light travel is possible.  And the equations, oddly enough are in her own handwriting.  But aliens don’t exist, except for things like microbes in the atmosphere of Venus. What Lakshmi doesn’t realize is that a secret program of FTL travel has existed for decades. And Aliens? Well, they exist too. Lakshmi’s equations may yet destroy a delicate balance of power, and help awaken contact with aliens who have been around a very long time indeed...

Lakshmi’s story is the main thread in Ken MacLeod’s Beyond the Hallowed Sky, first in his projected Lightspeed Trilogy.

Faster than Light Travel, for those SFF readers who haven’t thought about it, and it takes a knowledge of relativity to really grasp it, points directly to the potential for time travel and causality violation. There are NO privileged frames in reference in Einstein’s relativity, and one can arrange a situation where a FTL spaceship can see the arrival of a signal going at lightspeed before it was ever sent...and even stop the signal they saw being sent from actually ever being sent! Whoops.

So you can see why Lakshmi is a little shaken to have received a message from her future self, providing equations for a faster than light drive. Worse, its not a prank, not a hoax, and the equations are right. This revelation leads Lakshmi to defect to a power smaller than the UK-US alliance, or the Co-Ord of Russia and China, a power that could very well use a FTL drive to play catch up--the Union, as embodied and lead by the Republic of Scotland.

MacLeod is hardly content with casualty violation in a novel, readers of his previous works will be expecting lots more to stir this pot, and so he delivers. FTL is not new in fact, and in fact the two major powers have secretly had it for decades (and once Lakshmi publishes her paper, that secret is perished). The Union has a station in the atmosphere of Venus (which now that the Alliance and Co-Ord have revealed FTL travel, feels like a sideshow--but, really will turn out to be anything but).  And then there is the exoplanet of Apis, which delightfully puns on several levels for reasons I will let the reader discover. Apis has evidence of alien materials...aliens fittingly (a la the Fermi Paradox) called Fermis.  It is in fact a shakeup of the humans on Apis’ relationship to the Fermis that provides, along with Lakshmi’s plot, that provides the impetus for the plot.

And it is a rich future, 50 years hence, that MacLeod offers us. In many ways, it is a relatively optimistic future--not a pollyannaish, mind, this world has had scars of the last 50 years, and yes, climate change is definitely a thing, but it is a world that has gone through a lot. With just a line, such as “America is a democracy again”, MacLeod lets the reader a bit into the future that has happened, and lets us as a reader fill in the gaps where it is not plot-relevant. The tripartite “”Cold Revolution” (more of a Pournellean Co-Dominium) of thie late 21st century gets much more fleshing out, and while we do not see anything from the Co-Ord point of view, we definitely get to see what life in 2080 is like for those in the Alliance, one of the two major powers, and in the Union, as seen in Scotland, seeing what a second rung power is trying to do in competing with its larger brethren. And then there is MacLeod’s depiction of the hellish Venus (and the station hanging in its atmosphere) and even more to the point, the alien planet of Apis. If anything, the politics and setup of Apis were, for me, just a little bit underwritten--I wanted even more before things start going sideways and we are off and running.

In general, Beyond the Hallowed Sky reminded me, oddly enough, of some of the work of Ian Sales’, particularly The Eye With Which The Universe Beholds Itself   which also features secret FTL travel, and extrasolar exploration, and the anthology he edited, Aphrodite Terra: Stories About Venus. Sales is a very different, and even more spare writer in some ways, but I kept thinking of Sales’ work as the stories on Apis and on Venus continued to unfold.

To bring this story to life, Macleod provides a large cast across Scotland, Venus and Apis. Lakshmi, the aforementioned genius who apparently has violated causality. John Grant, who takes a picture of an Alliance submarine that vanishes into Cherekov light, and gets tied into a project to turn Lakshmi’s equations into reality... Francesca Milloy has ambitions regarding her equipment’s ability to walk around the deadly surface of Venus for extended periods. And Dr Hazledine, stumbling into alien contact on Apis that will upset many applecarts.

Interestingly, for me, anyway, the two most intriguing characters among the cast that MacLeod presents here are not human at all. One is Marcus Owen, who is a robot. Marcus’ arrival on the Venus station sets off a whole cascade of consequences. Marcus is officially a diplomatic attache, but everyone knows that he is a spy. But what are his goals? What Marcus winds up doing and the path he winds up going down is one of the more delightful subplots in the novel, and robot or not, Marcus is often a surprising character. The other character may not be technically a character, per se, and that is Iskander, the Union’s AI. In addition to providing information to various characters, Iskander also definitely has a personality all of its own, and clearly an agenda, too. The love-hate relationship that some of the characters have with Iskander feels like a descendant version of how some people consider search engines and allied tools, today. And given how things play out in the novel, I look forward to how Iskander evolves in the next book in the series.

And that does bring me to the last point. Yes, this is the first book in a trilogy. It does nicely stand alone as that first book, providing enough of an offramp that readers will be satisfied, I believe, with how the novel ends. The plotlines of this book resolved satisfactorily and people who just want to read one Ken MacLeod novel, perhaps, this would be a good place to start. For those intrigued by the world and questions the novel raises, like me, I look forward to seeing how MacLeod continues to develop this world and setup.

Bonuses: +1 for a very intriguing setup.

+1 for making this accessible as the first book in a series you can stop, if you wish, here.

Penalties: -1  Some of the worldbuilding, given that setup, could have been fleshed out a bit more.