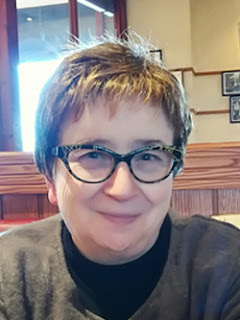 Jacey Bedford is a British writer of science fiction and historical fantasy. She is published by DAW in the USA. Her Psi-Tech and Rowankind trilogies are out now. Her new book, The Amber Crown, is out in January 2022. Her short stories have appeared in anthologies and magazines on both sides of the Atlantic, and have been translated into Estonian, Galician, Catalan and Polish. In another life she was a singer with vocal trio, Artisan, and once sang live on BBC Radio4 accompanied by the Doctor (Who?) playing spoons. 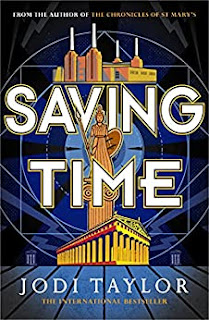 I'm in the middle of reading Saving Time by Jodi Taylor. It's the third book in her Time Police series, which in itself is a spin off from her fabulous Chronicles of St Mary's. 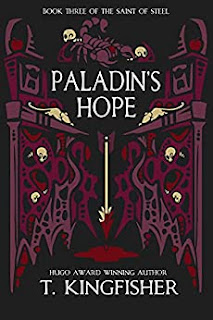 The two I was waiting for dropped together a couple of days ago, giving me the delightful dilemma of which one to read first. The first is the aforementioned Saving Time, and the second is T. Kingfisher's Paladin's Hope, which is the third book in her Saint of Steel series, set in the same world as her Clocktaur Wars books. (T. Kingfisher is the adult pen name of well loved children's author Ursula Vernon.) The next book I've pre-ordered is A Catalogue of Catastrophe: Chronicles of St Mary's 13 by Jodi Taylor. Any new book in the St Mary's sequence is a buy-on-sight for me. Also Risen: The final Alex Verus Novel is due soon. I'm looking forward to discovering how Benedict Jacka ends the series. 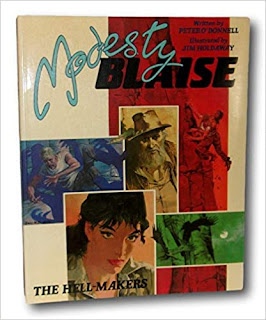 Oh, so many books and so little time. If I had all the time in the world I would love to read my way through all of Lois McMaster Bujold's bibliography, especially her Vorkosiverse books. I also had a sudden yen to re-read Peter O'Donnell's Modesty Blaise novels which I haven't looked at for decades. 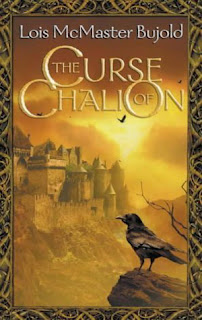 That's easy – Lois McMaster Bujold's Curse of Chalion. She's so very good at plot and setting… but best of all, character. Her protagonist, Cazaril used to be a bright young thing, a spectacular soldier with a dazzling career ahead of him, but he was betrayed and sold to the galleys. Now he's free and trying to walk back to the only place he remembers as being a refuge. He's a broken man with damaged hands and a back ropey with scars from the lash. He's no longer a flashy swordsman, but he's clever, kind, and steadfast, and willing to put his life on the line for those he cares about. He never once considers that he's the hero of the piece – which of course makes him doubly attractive. Yes, OK, I admit it, I'm a little bit in love with Caz. 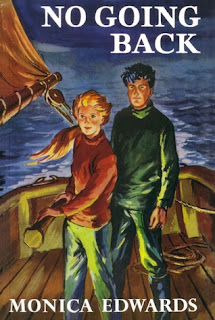 There's a little known British children's author called Monica Edwards who was writing from the late 1940s to the late 1960s. Her Romney Marsh books are gentle adventures featuring four children in an idyllic coastal village full of ponies and boats, and populated with great characters. Unlike a lot of children's books of the era, she doesn't get rid of the parents or sideline the adults. The children grow up as the series progresses until two of them recognise that they are perhaps more than just good friends. That comes about halfway through the series and the book in which it happens is No Going Back, my favourite. I stole two of Ms Edwards' adult characters and mushed them into one for a character in my Rowankind trilogy. Hookey Garrity, barely reformed pirate and sometime sidekick to my heroine, Ross (Rossalinde) Tremayne, has aspects of both Hookey Galley and Jim Decks who feature throughout the Romney Marsh books. Hookey Galley is always a bit sinister and Jim Decks is an incorrigible rogue. It's a good combination.

6.  And speaking of that, what’s your latest book, and why is it awesome? 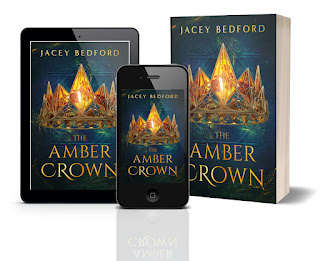 My upcoming book The Amber Crown is due out on 11th January 2022. It's another historical fantasy, but this time a standalone, not the beginning of another trilogy. It's set in an analogue of the Baltic States around the middle of the 1600s, though I've seriously messed around with real history. It starts with the aftermath of the assassination of the king and features three main characters. Valdas is the bodyguard who was in the wrong place at the wrong time and failed in his duty to protect the king. Mirza is a Landstrider witch who can cross into the spirit world. She is given a task by the ghost of the dead king and must keep Valdas on track because he's deaf to the ethereal. Lind is the clever assassin who caused the whole sorry mess in the first place. He's got more hangups than a wardrobe full of coats and until he gets over his traumatic past he'll never be able to move forward. The three stories are separate to begin with and gradually converge. The usurper king is driving up taxes and heading for a war on two fronts which he cannot win. Only Valdas, Mirza and Lind can right the wrong and save the country, but there's a dark and powerful magic force rising against them in the capital. I really enjoyed writing this mixture of politics and magic, so I hope people will enjoy reading it.