This week has not been the best in terms of my New Year's resolutions. I have failed at watching any new DC movies (or even their new show Doom Patrol) and am bringing you all a trio of Marvel reviews including two major titles.  I will admit that I feel a bit intimidated hopping into the Valiant Universe, but will make an effort to improve moving forward. 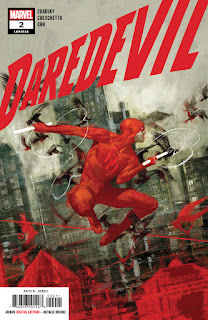 Pick of the Week:
Daredevil #2 - Chip Zdarsky is not wasting any time bringing us a thrilling new arc for Daredevil.  After being framed for a murder, Daredevil is struggling to figure out who set him up.  He investigates a couple of leads, but not even Foggy believes that he is innocent.  Grasping at straws, he finds himself back at the scene of the crime and runs into a pair of detectives who are looking for him. If there is one thing you don't do when you meet a pair of cops looking for you is attack them.  Daredevil goes on the offensive and suffers some major repercussions. There is a lot to unfold, including the new detective who is on the case and his conversation with Fisk, and it appears that once again this series has done a great job passing the torch to a new creative team.

The Rest:
Doctor Aphra #29 - In a very Running Man-esque plot, Aphra must remain close to Triple-Zero to prevent their proximity bombs from exploding. Doctor Cornelius Evazan is broadcasting the entire event as they race to find the one specialist in the galaxy that can remove the bombs in time. The audience remains captivated as the two appear to grow as friends through their trials and tribulations, but a bounty hunter has an effective trap that might ruin the entire gambit.  The witty dialog between Aphra, Triple-Zero, and BeeTee (who makes a late appearance) brings me back to the early days of the comic when the trio was working with Vader. This has been a fun arc.

Captain America #8 - Speaking of super heroes with legal troubles, Steve Rogers finds himself locked up in a prison designed for people with super powers after being framed for, wait for it, a murder he didn't commit.  Rogers was framed because a man who looked like him installed a Hydra regime that didn't earn him any fans. That regime has been overthrown, but Rogers has a lot of enemies and is currently locked up with a lot of them. Fisk is mayor in this scenario and it makes me wonder where this fits with what is happening to Daredevil.  Is Marvel possibly setting up this year's summer event?  Doubtful, but fun to think about.