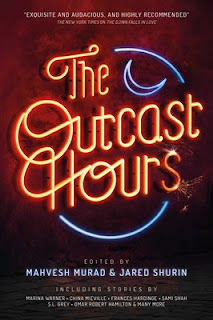 There's a fine line between an anthology not really holding together and being intriguingly diverse. Every reader of The Outcast Hours by Mahvesh Murad and Jared Shurin probably has their own opinion on which side the book ultimately falls for them.

It is very diverse: there are stories about a toothfairy, feuding apothecaries, a babysitter for criminals' children, a babysitter for homeless dogs. Sam Beckbessinger, Lauren Beukes and Dale Halvorsen's opening story is one of the best pieces of socially relevant occult gore short fiction I've ever read – I confess I didn't know there's such a niche before picking the book up.

Night is a great theme for a short story anthology. It is mysterious, atmospheric, intriguing, fleeting and uncertain – as all enjoyable art and fiction – so there's plenty of room to play with and not too many restrictions on where you can go. My main criticism of the anthology is that quite many of the stories leave these possibilities on the table and focus on night just being synonymous with darkness.

I mean, in some stories, night is not a mysterious landscape for whatever you can dream up. Instead, it's a place of nightmares. On the other hand, that's probably entertaining for readers who enjoy whispering to their protagonists that going down to the basement with an enigmatic, sargophagus-collecting millionaire in Karachi or to the home of a bit-too-eager Tinder date in New York City is arguably not the best thing to do if you're in this kind of a book. Nevermind the continent, your chances of living long and happy are going to take a dive.

However, this whispering business is not what I'm into when it comes to horror. I appreciate horrific stories that do a little more to make me afraid than relying solely on a spooky twist-ending, as demonstrated by Beckbessinger, Beukes and Halvorsen's great opening for the book. I fear that even that would have lost some of its power if the editors had decided to place it deeper in the anthology after some other horrors had numbed my senses first.

The best part of reading anthologies like this is of course discovering interesting new authors you had never heard of before. For me, the most promising new acquaintance is maybe Matt Suddain whose tale about two chemists in a weird fantasy (or maybe not) town that is too small for both of them is quirky, weird and suggestive with perfect dosages of each. Suddain delivers his simple story just right, which isn't that easy to do.

In the short space that each story is given, some tales feel that they would have what it takes for being longer, whereas some others seem a bit forced at this length. Couple of the stories would probably have worked better in the same form as China Miéville's ambient one-or-two-page microstories or vignettes sprinkled through the book, as not very much is always happening.

Because the stories are so short, there's a lot of them – 25 in total, not counting Miéville's nine short-shorts. There's something to like and dislike for everyone, and the best way to experience The Outcast Hours is perhaps not to accelerate through it (it's a rapid series of accelerations and sudden stops) but rather to read one or two before before going to sleep – or at any rate before the night comes.

Bonuses: +1 for variance and diversity

Penalties: -1 for the cheap scares, -1 for doing too many things at once

Nerd Coefficient: 7/10 – "An enjoyable experience, but not without its flaws"