Microreview [book]: The Song of All, by Tina LeCount Myers

The Song of All uses Saami culture and mythology, as well as a crunchy set of characters and motivations to portray a frozen and bloody tale. 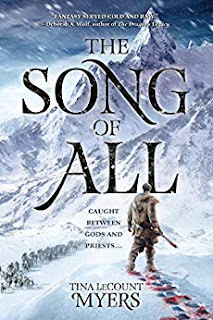 Irjan just wants to live a peaceful life as a farmer on the cold fringes of the tundra with his wife, Sohja. He has a past that he has not told her about, and frankly would far sooner forget. But when an ambitious priest decides that his key to escape the hardscrabble life on the edge of civilization is to motivate Irjan to action by means of a violent tragedy inflicted on his family, Irjan’s course will affect not only himself, the life of his child, or his people, but the fate of two races.

This is the story of Tina LeCount Myers’ The Song of All.

The opening chapters of the novel felt a bit rough and rushed, with the inciting incident of the novel coming off tempo. The novel feels like its in too much of a hurry to get to that point, at the expense of setting it up better. I think it could have been foregrounded better. We only afterwards really get a sense of who and what and why, and what it all means.

Once the novel gets past that and we get into the meat of the story, the novel settles into its strengths. Once we get a real sense of what Irjan is about, the black tragedy of his arc makes for a dark, but compelling read. Combine that with the Japmemeahttun, the race of immortals that man once warred with and that some would see that war prosecuted again. Theirs is a dying, diminishing race, who are raging against the dying of their light, but the press of mankind means that their days do indeed seem to be numbered. The slow inexorable decline of their race brings to mind novels revolving around the tragic fall of the Fae, particularly in, say, Poul Anderson’s The Broken Sword. Indeed, not to spoil some things revealed in the background of the novel, there are other parallels to be made, too.

But while The Broken Sword goes for Norse and Germanic myth for its taproots for its worldbuilding and sets it in our Dark Ages, The Song of All elects to go northeast, to the Saami and Finish cultures and mythologies and stay strictly in a secondary world. This is not quite borrowing from the Kalevala, but it is inspired by the culture and legends.  The author has a penchant for a lot of loan words, further grounding the worldbuilding in that culture. While the language of the novel is descriptive and immersive, the author does not go into tremendous worldbuilding detail. We feel the cold thin existence on the edge of the tundra, writing that seeps that cold into the bones, but it's written so that the reader can bring many of the details themselves, rather than going into deep depth of description. It’s evocative rather than plainly descriptive writing, but it works very well for that.

This is a novel that reads  much more like a saga than an epic fantasy novel, and a saga told to locals more than a secondary fantasy novel in typical fashion trying to build that out. One could imagine Irjan’s story, as written here, being presented for the benefit of the inhabitants of that world, who would already know what, for instance, a duollji is. The novel is far more interested in actions, and the consequences of those actions. So while the novel is light on traditional worldbuilding, it is very strong on plot. There is a rich tapestry of character stories and motivations here that, when the novel gets out of that early roughness, propels the narratives of the characters forward in a very readable fashion

Irjan's story is at the heart, but the novel is full of characters with hopes, agendas and plans of their own. The scheming Apotti (priest), Rikkar.. His assistant, Siggur, equally ambitious in his own right. The Japmemeahttun, Ailllun and Djorn, seeking to try and follow the precepts and traditions of their culture to keep their race alive. And more.

However, in addition to a bit of a rough opening, I was not entirely satisfied with the end matter of the book. The novel, after that very solid core, suddenly slingshots the narrative far into the future in the last, shortest portion of the novel. That future feels much more sketched in, world and character wise, as compared to the richness of what has come before. That section seems to exist more for an event to occur than anything else, and it left me questions about the intervening years and just what has happened in that gap. I do understand wanting to, and being motivated to skip the “dull bits”.  With the majority of the book being so deep and rich in the characters and the plot, this felt like a too brief wade into the future of the series (there is another book coming) and it feels like an unsatisfactory bridge to me, thereby, to it.

Overall, however, the vividity of the characters and the plotting, and the language of the novel made this an enjoyable and intriguing epic fantasy experience to read. I will be curious where the series goes from here, based on the events of that last section.

Bonuses: +1 for immersive, poetic writing
+1 for a strong central character

Penalties: -1 for some roughness in the beginning that take some time to smooth out
-1 for an ending that feels like a compressed opening for a subsequent novel