Now that the excitement from San Diego Comic Con has subsided I will be returning to my weekly comic book round-up.  This week is exciting for multiple reasons, but the big one is that a franchise that I enjoy as a board gamer, Dead of Winter, got the comic book treatment and the other one is Bill Willingham's return to comics in Lark's Killer. 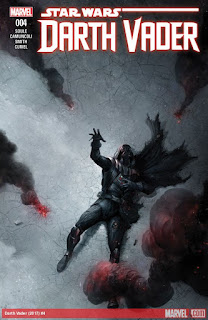 Pick of the Week:
Darth Vader #4 - Vader is currently searching for Jedi who have escaped the Emperor's purge following the conclusion of the Clone Wars, and appears to have met his match in Master Kirak Infil'a.  Appearances are a funny thing though.  Left for dead at the bottom of a cliff, Vader is not one to underestimate. As I have mentioned before, the comics have done a masterful job at truly depicting the power of Vader, and Charles Soule gives us a terrifying glimpse of what an angry Vader is capable of and why the surviving Jedi should be very afraid. The glimpses inside of Vader's broken helmet are incredibly well done and I am in complete awe of his power.  He truly was the chosen one, even if he hates sand.

The Rest:
Lark's Killer - The new series from Bill Willingham is a lot of fun and very unexpected.  The whimsical art from Mark Does Santos hearkens back to games like Sam and Max and Full Throttle, but the story tosses in a surprising amount of violence.  The story is about Lark, who finds herself transported from outside of a Walgreens into an unknown fantasy world.  Lost and being pursued by three men who want to kill her, she has no choice but to turn to sell swords to find protection and figure out what mysterious force brought her there.

The Walking Dead #170 - It is hard to imagine that this book is approaching 200 issues and doesn't show any signs of slowing down. The prospect of a free Negan may not be enough to keep me on board at this point. It isn't that the series is bad by any means, I am just enjoying other books more and feel they are more deserving of my time and money. This issue served as a nice transition between arcs, and much like Negan bid farewell to Lucille, I think it is time for me to bid farewell to the Walking Dead for the time being.

Dead of Winter #1 - As excited I was about this book, I left feeling a bit disappointed with the overall tone of the comic. I am likely biased by my experience playing the game, but the humor and cartoonish art of the comic didn't invoke the terror and fear the game conveys. Without spoiling anything, the final character reveal has me excited to check out the next issue, but it read like a generic zombie survival comic with curse words. Newcomers to the series will likely enjoy seeing Sparky, the superhero dog, in action, but I feel this character would have served the series more in a smaller capacity.