Some of the San Diego Comic Con exclusives have been announced and once again Funko is bringing the heat.  A much demanded Pop!, Princess Leia is getting the holographic treatment in a stunning two-pack.  Really hoping to make it to the booth in time to pick up this amazing set.  Enough toy talk, huuuuuge week of comics! 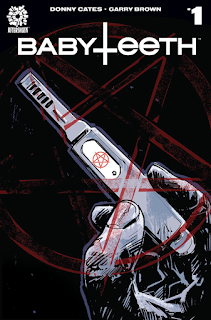 Pick of the Week:
Baby Teeth #1 - I was introduced to Donny Cates' work with Redneck, which is amazing, so I was excited when I heard he had a new titles coming out about the birth of the Antichrist.  The story opens with a scared mother, Sadie, recording a video to her child.  It tells the story of his birth, which included earthquakes, a near death experience for Sadie, and that this devil incarnate is named after a superhero. This comic, while the story of how the Antichrist was brought to this planet, still remained as a beautiful story of new life.  I am looking forward to learning more about how Sadie ended up where she is and the life of the young devil.

The Rest:
The Unsound #1 - Cullen Bunn treats us with a creepy new title set in some sort of haunted psychiatric ward.  At least it appears to be haunted through the eyes of Ashli, the new nurse who has a horrifying first day in the ward.  In what felt like the pre-credits scene to a psychological thriller, the first issue leaves you begging for more.  I am quite intrigued by this new title and anything that is scary and has Bunn's name attached to it is likely to be quite good.  Mix in the unique artistic approach from Jack T. Cole and you are introduced to a world that is beautiful from one angle and paralyzing from the other.

Paper Girls #15 - The girls learn the hard way not to mess with the time space continuum when they are compelled to help their new friend save her child.  We learn a bit more about the foldings, or time holes, that brought the girls into the past.  This was one of the more exciting issues as of late that resulted in overhearing something called "The Beta" that sounds very exciting (some sort of time fixer) and the girls are dropped into a surprising future.  I will avoid spoilers, but it gave me flashbacks and was terribly exciting.

All-new Guardians of the Galaxy #3 - It isn't surprising that I am really enjoying this series penned by Gerry Duggan.  In this issue we learn more about the secret that Gamora is holding back from the rest of the crew.  Still no word on why Drax gave up destroying, but the wrinkle that is Gamora's secret is a very interesting development.  This issue didn't have the trademark Duggan humor, but it was a stellar issue that has me fully invested in where this series is headed.  I can't recommend this one enough to anyone who enjoyed the films.  Being that this is issue #3, it would be easy to get caught up and pick up the other two issues as well.

Daredevil #21 -  Now that we know how Daredevil was able to make the entire world forget his secret identity, it is back to the usual crime fighting in Hell's Kitchen.  The start of a new arc, this issue felt like a throw back to Silver Age comics and is extremely effective for the man with no fear.   We even get a Toucan Sam reference thrown in for good measure!  The art and color from Goran Sudzuka and Matt Milla is phenomenal and has a retro feel that feels like a fresh start for Daredevil.  In addition to the classic crime stopping that takes place, Charles Soule gives us a tease as to why Daredevil wanted to put the cat back in the bag and I am a bit nervous about his plan.

Batman #24 - This issue is the straw that broke the camel's back for me.  Tom King has had his ups and downs, in my opinion, writing this series and this issue reached the point where I am comfortable dropping this series.  He had big shoes to fill, but even Scott Snyder had a couple of lackluster arcs in his amazing run.  I weathered it as long as I could and I am sure a lot of readers are enjoying his take, but it isn't for me.  If you have any suggestions as to what Batman series you recommend please drop me a note in the comments.  I won't spoil the moment that solidified it for me, but a quick Google on this issue should let you know if you don't care about spoilers.

The Walking Dead #168 - As we close the book on one chapter we open the door to what is next.  I am not sure what that will be in this series, but Robert Kirkman really delivered a touching issue that somehow brought up Negan's foot fetish.  The fine line between what Negan spews and the rest of what Rick and company are dealing with after the loss of Andrea works really well in this issue.  Negan has almost reached the point where you feel that you can trust him and that he is an asset for Rick and his crew.  It is a shocking development that will likely lead to the rug being pulled out from beneath my feet and I am looking forward to it.  The final panel was extremely powerful and moving and a somber reminder that this series is still a human drama at its heart, not a zombie book.