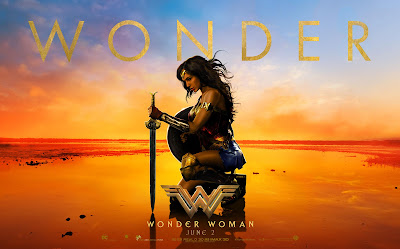 Wonder Woman opened to much ado, and critics are raving, at least in the SF/F realm, saying Wonder Woman is the superhero you’ve been waiting for, even going as far as to call it a ‘love letter to feminism'. Look, I get it, we’ve been waiting a reeeeeely long time to see a female superhero smash box office numbers, but just because it now exists, doesn’t mean it’s the one.

The film opens with young Diana, daughter of Hippolyta, the leader of the Amazons, and Zeus (I assume you know who he is), desperately wanting to train as a warrior but forbidden to do so by her mother. Like a good little bad ass, she sneaks out and trains anyway, until her mother finds out many years later and dictates that fine, she can train, but she must be trained harder and fiercer than any warrior before her. The final training scene ends with Diana displaying a show of power she didn’t know she possessed. Shortly after, a WWI plane breaks the protective barrier surrounding Themyscira and Diana (Gal Gadot) rushes out to save the drowning pilot Steve Trevor (Chris Pine). From him she learns that the outside world is involved in a terrible war, and knowing that the god Ares is bound to return to reign destruction, Diana sets out with Steve, against her mother’s wishes, to kill Ares and end the war.

This is where the movie becomes rather contrived at times. Of course, in the ‘real world’ Diana is the stereotypical fish out of water, and incredibly reminiscent of Leeloo Dallas – beautiful and innocent and guided through society by an obvious love interest, but incredibly fierce and independent at times. And while the initial battle scene at Themyscira was magnificent to watch, the fight scenes throughout the film were far too Matrix-esque, down to the often rubbery-looking Diana. Wonder Woman herself is very sexy, which in and of itself isn’t a bad thing, but the film seemed to be mostly shot from the male gaze, with many upward body shots of Diana in her short armor. This was especially disappointing since the film was directed by a woman.


Overall, Wonder Woman was a decent superhero film. It was flashy and entertaining and Gal Gadot stole every scene she was in. Chris Pine was fantastic as well and the chemistry between the two was a pleasure to watch. I agree with most of fandom when the say it was exciting to see a solo female superhero finally grace the big screen and shatter box office expectations (Wonder Woman wasn't even playing in the Big D, IMAX-like room at my local theater, I assume due to low turnout expectations), and Diana had some great one liners like ‘what I do is not up to you’ directed at Steve Trevor, but it very much falls short of being the female representation we’ve all been waiting for. As my wonderful partner (who is often exasperated by my relentless critique of pop culture) pointed out when the credits rolled, she still needed the man to save the world at the end – just like Leeloo, and Furiosa, and the many other ‘strong female leads’ that came before.

Bonuses: +1 for showing haters that a female led and directed movie can be highly successful, +1 for the few, but great, scenes where Diana's independence is highlighted (e.g., 'what I do is not up to you')

Penalties: -1 for needing the love of/for a man to recognize her true potential, -1 for the male gaze thing

Nerd Coefficient: 7/10 - an enjoyable experience, but not without its flaws