What can we do in the face of fate? 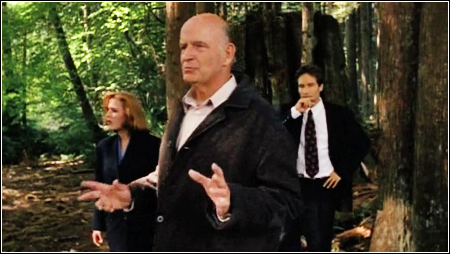 When I was growing up, I was obsessed with The X-Files, like wanting to be an FBI agent level obsessed, like getting the “Scully” haircut level obsessed, like Mulder and Scully action figure-owning obsessed (actually, I still have those). So, that’s to say, it’s more than likely that I’ll return to more X episodes, but for this first post on the show that influenced me a whole lot, I thought I’d start with one single, perfect episode: “Clyde Bruckman’s Final Repose.” A note on these posts: because I’ll be analyzing these works from a variety of angles and contexts, there will most likely be spoilers within for the pieces that I am talking about. If you haven’t seen/read them and wish to, avoid the post and come back later.

To begin, this isn’t even my all-time favorite X episode (that would be “The Unnatural” which is one of the greatest television—any show—episodes of all time). However, it is one of the first episodes I ever saw and it is also one of the first that truly meant something to me. For those of you who don’t know: The X-Files followed two FBI agents, Fox Mulder and Dana Scully, working in an obscure unit of the FBI which investigates paranormal crimes. Mulder is the hardcore believer and Scully is the skeptical scientist. You’ve, I’m sure, seen the combination now down in countless other shows, but X did it best. This particular episode, the fourth of the third season, follows the duo as they investigate a slew of killings of psychics and meet one man, played brilliantly by Peter Boyle, Clyde Bruckman who is an actual psychic---the catch is that he can only see how people will die.

In terms of The X-Files, as a series, this was an important episode for many reasons. It remains regarded as one of the best in the series and it snagged the show’s only Emmy award for Writing (as well as a guest actor award for Boyle). The writer of this episode, Darin Morgan, also penned the equally classic “Jose Chung’s From Outer Space.”


The episode also is important in that it is one of the few early episodes that offered a subtle role reversal. Mulder is depicted as a skeptic (somewhat) in how he calls out celebrity psychic Yappi, but more importantly Scully has a moment of beautifully veiled belief. The very end of the episode shows off some of Gillian Anderson’s exquisite acting as she realized that a vision Bruckman relayed to her is true, just not in the way that she had taken it to mean.

In addition, this episode matters to the wider genre of SFF because of its depiction of psychic abilities. We are used to seeing movies and TV shows depict psychics who are frauds, but “oh boy, what about this one real psychic!” twist. However, this episode takes that spin in a different direction—both the killer and Bruckman are psychic, but also both in highly specific ways. Bruckman can only see people’s deaths (a skill he claims arose from becoming obsessed with the vagaries of chance following the death of the Big Bopper) and the killer can only see himself committing crimes but not why he’s doing it. Both fall victim to their own powers. The killer kills because he sees himself doing so and doesn’t think otherwise, Bruckman ends up dying because he feels that that’s what is supposed to happen. What the episode seems to be saying is that everyone is a victim of fate, even if they have the power to see it coming. In the killer’s case, its madness to accept his fate of killing. In Bruckman’s case, it’s a kind of peace (echoing a recurring dream he has of his own body decaying and returning him to the earth).

Finally, the episode also contains one of the most perfect moments on the show: when Scully takes the bait and asks how she’ll die, Bruckman’s face glimmers for a second with real delight (the first time we’ve seen all of the sadness completely leave his face) and says that she doesn’t. Not only does this add to the show’s mythology—ie is Scully immortal?—but also offers a moment of such strange hope, in an episode filled with the futility of hope against fate, that one can’t help being moved by it.
Posted by Chloe N. Clark at 12:00:00 AM