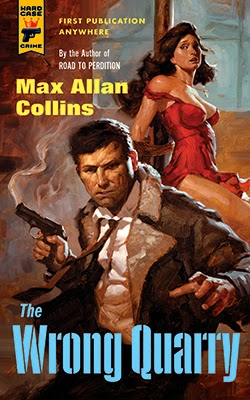 I love when an ending saves a book.

The Wrong Quarry, Max Allan Collins’s eleventh entry in the Quarry series, continues the exploits of Marine-sniper-turned-contract-killer Quarry—hence the title. At this point in his career, Quarry has killed his handler, known only as The Broker, and he’s hit on a new business model. Using his old boss’s files, he stalks assassins on the job, finds out who the target is, and offers the marked for death bastard a deal: Quarry will rub out both the assassins and whoever paid for the hit. For a fee. The Wrong Quarry opens with our hero following a hit team to the quaint town of Stockwell, Missouri where he soon finds himself immersed in the mysterious disappearance of Candy Stockwell, the granddaughter of the town’s patriarch. Quarry soon discovers that the family of the missing teen has put a hit on the man they believe is responsible: middle-aged and clearly gay dance instructor, Roger Vale. Quarry strikes a deal with Vale to turn the tables on Stockwell and quickly gets to work—though he can’t quite shake the feeling that he’s being played by someone.

The Wrong Quarry is an uneven, though ultimately enjoyable novel. The first hundred pages are a rapid read. Collins gives you the set-up and plunges directly into the heart of the matter. By the middle of the book, however, the story gets a bit bogged down in the back-story of Candy Stockwell. The problem is that Quarry spends far too much time talking to people who knew Candy, none of whom offer more then what we knew by page 40: Candy is/was a rich brat, prom queen, gifted artist, and town slut. The actual circumstances surrounding her death remain completely shrouded in mystery, with Collins not offering us—or Quarry—any clues as to what happened to her. Around page 168, The Wrong Quarry was hovering between and a 5 and a 6.

But Collins salvages the book in the last 50 pages with a well-placed twist—and then a second one for good measure.

This is my first Quarry novel, so there’s a good chance that I’m missing something. There seems to be a tension at the heart of the book: is it a murder mystery or an action tale? Quarry is, after all, an assassin. But only four people get killed in The Wrong Quarry. The book often reads more like a murder mystery. But Quarry’s detective work doesn’t really uncover much. By the novel’s end, it becomes apparent that this tension stems from Quarry’s professional development rather than the structure of Collins’s narrative. Towards the book’s conclusion Quarry says, “I wasn’t just killing people anymore. I had put myself in the position of having to think about the reasons why people were killed.” Since I am not a longtime reader of the series, I cannot say whether this transformation has been gradual or whether it begins with The Wrong Quarry. Nevertheless, I appreciated it.

Collins is an able writer. He balances terseness and subtle flourishes, adding (sometimes corny) humor to the straightforward narrative. I did find the sex scenes a little heavy-handed. I am by no means a prude—and the Catholic guilt instilled in me as a child has long since worn off—but there’s a certain sophomoric coarseness in the depiction of a few of the sex scenes and in the all-too-frequent references to Quarry’s torpedo. But this accounts for no more than five pages of the book. The rest is pretty damn good.

Penalties: -1 for making me blush