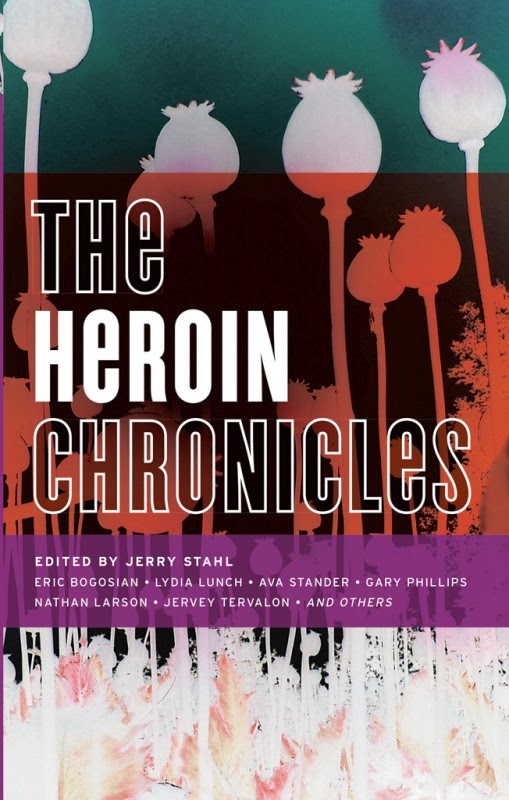 I suppose it’s the needle. I have been pondering the allure of heroin in fiction. From The Man with the Golden Arm to the most recent version of that story, heroin’s prevalence in film and fiction far outpaces its prevalence in actual society. Other drugs don’t get the same treatment. Meth is too scary; coke, for whatever reason, too comical. The only other drug that competes as a dramatic device is alcohol, but for very different reasons. Most of us know alcoholics. Most of us have been drunk. Some of us have struggled with our drinking—at the very least having had to “cut down” at some point. But heroin, elicits sympathy, rarely true empathy. This is a reality we will never experience firsthand. We can shake our heads and say “there if not for the grace of…” and not mean it. Like good Puritans.

Onto the review: The Heroin Chronicles is an excellent collection of strong, well-written, and often surprising stories. There are the kinds realist junkies stories one would expect, more often than not set in New York or Los Angeles. There’s a lot of hustling, a lot of sex work, a lot of scheming. And, when all that works, heroin. L.Z. Hansen’s wonderfully paced “Going Down” recounts a very terrifying, though not at all improbable struggle of a young junkie to find someplace to get high. “Fragments of Joe,” by Tony O’Neill, is notable for it’s macabre touches, reminiscent of The Damnation Game…but about heroin. “The Monster,” by John Albert, is an almost hardboiled, certainly violent revenge tale, of sorts.

The Heroin Chronicles also features less stereotypical junkies. After three years of being clean, Nathan Larson’s protagonist Dos Mac—introduced in the Dewey Decimal Series, also by Akashic—finds himself looking for a score in a dystopian near-future New York in “Dos Mac + The Jones.” This is unsurprisingly a difficult task. Michael Albo’s “I Need to See a Man about a Duck,” perhaps my favorite of the book, is the comic tale of a seemingly straight-laced LA pornographer dealing with the hassles of stocking up for the weekend. Fair warning: there's a duck involved.

A couple of stories avoid junkies altogether, though not the heroin, of course. “Black Caesar’s Gold” by Gary Philips almost feels out of place: the only connection with heroin is a 1969 Mustang Fastback once owned by OG drug lord Frank Matthews. But our hero nerd’s struggle to get and then keep his hands on that piece crime memorabilia turns out to be a comical story of tables being turned.

All in all, The Heroin Chronicles is a very solid collection of stories, alternatively dark and funny, gritty but often lighthearted and sometimes poignant. In fact, the only disappointing entries were from Lydia Lunch and Eric Bogosian—the latter’s story being too insubstantial to say much about.