Microreview [book]: Scourge of the Betrayer, by Jeff Salyards 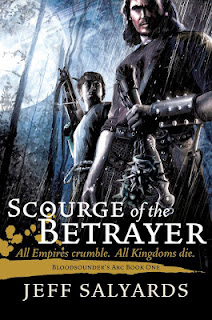 Jeff Salyards's debut novel, Scourge of the Betrayer, is a hard-edged, dark fantasy and the first book of his new series, Bloodsounder's Arc. It is told from the perspective of a naive, bookish young chronicler named Arkamondos (known as Arki), who, in an attempt to gain fame and wealth, joins a band of the feared Syldoon warriors (led by Captain Braylar Killcoin). For Arki, what better way to establish himself as a chronicler of repute than to follow a patron who intends to do great things?

Since the novel is told from the perspective of a chronicler, it gives the reader a sense of being an embedded journalist, piecing together the story of a band of rugged soldiers. The reader is placed in Arki's shoes, and is privy only to what he sees or hears. But since Arki is a newcomer to the Syldoon company and does not yet have Braylar Killcoin's trust, he is only given information on a need-to-know basis (and for much of this short, 255-page book, it is obvious that he does not need to know). Using Arki as his lens to view the broader world, Salyards thus presents his readers with a number of slowly unfolding mysteries. Who are the Syldoon, and what, exactly, are they up to? Why does an outcast Grass Dog named Lloi accompany them? Why does the Syldoon comapny require a scribe? And what is the deal with the mercurial Braylar Killcoin, his preternatural ability to sense danger, and his mysterious flail (which exacts a brutal toll on its wielder)?

Captain Killcoin, after noting that his contract with Arki discloses almost no information about the nature of his work, hints at the overall storyline. He tells Arki:


For now, I'll tell you this much. All empires crumble. All borders change. All kingdoms die. Where I'm talking you, you'll witness the death of a body politic, the expiration of a way of life, the redrawing of a map. Something singular and priceless. So put away your bleak looks and let's eat some of Hobbins' slop. My belly grumbles.

This piqued my interest. But what follows is a mostly slow-moving tale of the naive Arki slowly integrating himself into the Syldoon team. I appreciate Salyards's willingness to tell the tale from the point of view of an embedded journalist, one who little by little aligns his own interests with that of the warrior group. But in telling a story this way, Scourge forces the reader to wade through much of the book before getting any sense of the broader storyline.

Salyards's strength as a writer rests in his ability to tell a character-driven story. He creates a cast of memorable characters, some of whom are confronted with choices of foggy morality. Lloi the Grass Dog is perhaps my favorite character. She is an outsider to the group, but remains owing to her fierce loyalty to Killcoin. The other outsider, Arki, witnesses the greatest character development. His innocence and sincerity causes him to make questionable choices on the battlefield, choices that ultimately may have broader repercussions for himself and the group. And Braylar Killcoin is perhaps the most complex character. At times a mild-mannered man with a silver tongue that takes no joy in a fight, he nonetheless never hesitates in dealing out brutal or deadly force.

That said, Scourge does suffer from a number of problems. First, it does not engage in extensive world building, leaving the reader working through both the mystery of the Syldoon and the mystery of the world Salyards created. Moreover, there is no sense of geography linking the word together. This would be unsurprising, since we are seeing the world through Arki's eyes. But Arki appears almost too naive: he should know a lot more about the world than he actually does.

Arki, we find out, went to university to learn to read and write. One would assume that university would have provided him with much more than this basic knowledge. After all, even though schools of learning in premodern times taught through the classics, they would still have given students a sense of geography and politics in the broader world. But Arki lacks this knowledge, a surprising state of affairs for a learned young man.

Finally, although I found the writing for the most part good, Salyards does include scenes that could have been deleted from the book. One scene I found particularly grating was Braylar's sex scene with the barmaid. No, this doesn't owe to my puritanical nature (although I do find myself living in Beantown, the home of radical puritanism). I found it grating because it served no broader purpose (outside of alerting us to Arki's rearing and Braylar Killcoin's devil-may-care attitude, but these could have been brought out in other ways as well).

Although initially hard to get into, Scourge picks up toward the end. The last hundred pages were very good, and set the stage for a promising series. Fans of dark, gritty fantasy (Joe Abercrombie, for instance) will find much to enjoy in Scourge. Salyards has written a pretty good book and a nice introduction to what will no doubt be a riveting series.

Bonuses: +1 for a cursed flail, memory magic, the Deserter Gods, and the Godsveil. +1 for willingness to kill off characters.

Penalties: -1 for world building and no sense of geography. -1 for the meaningless sex scene.

Nerd Coefficient: 6/10   "Still enjoyable, but the flaws are hard to ignore"