'Paper Girls' is a more honest look at the 80s generation

If 80s kids must write stories that look back at their young selves, why not make it literal? 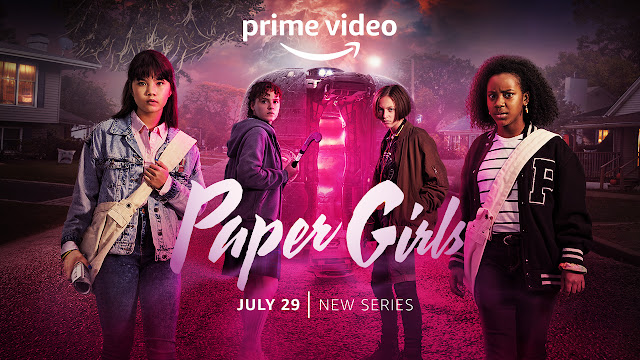 Yes, I know, it's yet another show about the 80s, but this one doesn't pretend it was a glorious time to live in. Each generation is handed their own rough deal, and the one that befell us 80s kids was to witness the beginning of the end of upward mobility, the rise of trickle-down Reaganomics, and the social damage caused by moral panic. We have, to put it mildly, a lot of baggage to process. To complicate matters further, we are now entering our middle-age crisis phase, which is why the world has been subjected to so many nostalgia stories this decade. We've seen the return of Ghostbusters, Full House, He-Man, Saved by the Bell, Top Gun, The Dark Crystal, DuckTales, and Baywatch, and we'll soon see the return of Willow, Quantum Leap, and Max Headroom. And of course, Stranger Things aspires to be the distillation of the entire vibe of the era.

So what does Paper Girls bring to the conversation about the 80s? For starters, it's not nostalgic. Its intention is not to make you feel warm and cozy about your childhood. It recognizes, and assumes that so do you, that the 80s were an awful decade. And so were the 90s. And so is the 21st century. There were never any "good old days." Whenever you are, that is your present, and in any present, life is hard. Having friends certainly helps, but the demons you carry are still yours.

Where Stranger Things tries to portray teen friendships as the foundation on which personal growth happens, Paper Girls demands that its characters first grow in order to learn to bond. Stranger Things takes kids who were already best friends and throws the end of the world at them. In Paper Girls, dealing with the end of the world is what turns the kids into friends. The interactions are more organic, the group dynamic is more realistic, the thought process behind hard choices is more compelling. Characters in Stranger Things are designed to allude to the archetypes of 80s movies. Characters in Paper Girls are designed to feel like people.

The other thing Paper Girls does with the 80s is turn the whole exercise of looking back into a two-way conversation. Our nostalgia binge is full of commentary on the 80s, but the use of time travel in this series allows the 80s to comment back. Generations are put face to face and given numerous chances to question each other, to try to figure out where things went wrong, and ultimately, to try to understand each other. Again, life is hard; it is in every decade. Much of the resentment and blame and scapegoating that one generation can hurl at the previous one or the next one can be explained by the failure to remember that life for them is hard too. We forget it so much that we often direct those hard feelings at ourselves.

Dialogue scenes between different versions of the same character are the best moments of the series. It's one thing to feel disappointed in yourself, and it's another to hear your past self or your future self say it to your face. It's a humbling experience to be shown a wider view of your life trajectory and discover that, every time you think you've got this life figured out, you're wrong. You may even convince yourself that the aspirations you ceased to have are no longer important, but the version of you that had those aspirations was no less real than you are now. Likewise, the person you will become may have valid complaints to make about the direction you went. You are your own harshest judge. If anyone has the right to be brutally honest about your mistakes, it's you.

This type of interaction intensifies the emotional stakes of Paper Girls to the limits of what the dramatic medium permits. In any narration it's normal for characters to challenge and call out each other, but it creates a very different dramatic situation to have a character argue with their own self. Science fiction uses this trick all the time, because it works really well, but very few stories have done it to the extent that Paper Girls does. To realize the fantasy of knowing your future opens the door to forms of vulnerability and introspection that would have been harder to achieve in more conventional coming-of-age stories. The focus of this series is not who will win the temporal war, but rather who these girls are capable of becoming.

Not that the temporal war plot is unimportant. It takes place in the background, as the excuse that allows for all the inner drama to happen, but it illustrates quite plainly the meaning of the story. It's a war between youngsters who want to improve the world and elders who want to keep it the way it's always been. In other words, the eternal struggle of every generation as it grows up and tries to reclaim its place. It's easy to imagine a window into the past and the future, but it takes a rare dedication to sincerity to let the past and the future judge us. And surely we'd have as many reasons to judge them in turn. But once you've had that conversation, once you've sat the child and the adult in the same room and given them time to scream their grievances and shoot their missiles, where do you go from there?

With the tease for a season 2, the plot of Paper Girls is not over yet, so it's premature to venture an all-encompassing interpretation. But isn't that the way life feels all the time? You don't have the full picture until it's over, and you never know when that is. You can only walk the road you see immediately ahead. When are you done growing up? You never know for sure. When are you complete? Maybe you already were and didn't know it. One reason why it's dangerous to view life as a story is that, for any present moment, the story is incomplete. And that's terrifying, because with enough time, you may become a completely different person. You may regret it. Or you may be glad it happened. Or you may not even have the chance to reflect on it.

Paper Girls takes the anxiety of our always incomplete story and makes it tangible in the conversations between child and adult. Now that we're inundated in reminders of the 80s, it's refreshing to have this series point out the folly of yearning for the past. You are the person you are. To truly return to the past, you'd have to forget everything you are now (a scenario that the series makes literal). That's what the obsession with 80s nostalgia has failed to understand: if time travel stories have taught us anything, it's that getting stuck reliving the same experiences is hell. We need to let the past be past. We need to live. That's the simplest message a story can carry, and perhaps the most essential. The road is not finished, and we can't see where it ends, but as long as we're on it, we need to live.

Bonuses: +1 for the refreshing emotional honesty that has been so lacking in the 80s nostalgia subgenre.