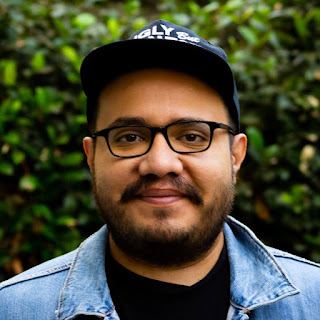 In the U.S., the period from September 15 to October 15 is officially designated as National Hispanic Heritage Month. So today we're showcasing the work of one of the many creatives of Latin heritage making awesome things these days: Henry Barajas, who wrote the graphic novel La Voz de M.A.Y.O.: Tata Rambo, about his great-grandfather Ramon Jaurigue's role in the struggle for the rights of the Yaqui tribe in Arizona, and is now writing the four-issue comic Helm Greycastle, an epic fantasy set in an alternate Mexico. He has generously taken some of his time to talk to Nerds of a Feather about his career and his creative process.

NOAF: To begin, tell us a bit about yourself and your life story.

HB: I'm a fourth-generation Tucsonan. Currently, I live in Los Angeles. I can't believe it has been six years already.

My life story is a lot like other millennials who were born on the cusp of the 80s and raised by children of the 70s. Comics raised me. I got a lot more out of Batman stories from the pages and the animated series than what weekend Bible school tried to drill into me.

I've been a lot of things: banker, bill collector, journalist, marketing manager, jazz festival co-organizer, pizza delivery guy, and radio deejay. But I've always wanted to be a writer―and that's what the world sees me as now.

NOAF: How did you become a comic book creator?

HB: I started publishing my own stories when I was 18. My first one was called El Loco. I co-created that character with political cartoonist Arnie Bermudez in response to Governor Jan Brewer's attempt to implement Senate Bill 1070. That was a dark, embarrassing time for Arizona. It was an assault on migrants and Latinx education. I wanted to use the power of comics to talk about these injustices committed against brown people.

So it was great to do something like La Voz de M.A.Y.O.: Tata Rambo with J. Gonzo, Bernardo Brice, and Claire Napier. It was like I was giving back to that 18-year-old kid who knew he wanted to make a difference but hadn't lived enough life yet.

NOAF: Which authors and artists inspire you?

HB: I was inspired by Arizona Daily Star political cartoonist David Fitzsimmons. I got to watch him grow and respond to the world in real time. I always wanted to think I was interesting and smart enough to do what he did, but without being able to draw. When I actually got to work for the Star, it was a dream come true to be in the same newsroom as him.

Eventually, I got my hands on a copy of Joseph Mitchell's Up in the Old Hotel. I knew I wanted to be a poor man's version of Joe. His words resonated with me in a visceral way.

But I can go on and on about who in comics inspired me. Just to name a few names: the Hernandez Bros, Brian Michael Bendis, Kelly Sue DeConnick, Marc Silvestri, David Lapham, and Mike and Laura Allard.

NOAF: What obstacles have you seen in the comic book industry for people of diverse backgrounds?

HB: The comic book industry is comprised of nepotism. Since the start of the business, it was curated and designed not by people of color. Systemic racism and sexism have dominated the medium. There's a preconceived notion that "Latinx comics don't sell" and "there aren't any women artists or writers." The people who call the shots are myopic. Hopefully, we have more people who can see the value in BIPOC, with an emphasis on non-binary creators.

Personally, I've had to raise money using Kickstarter to pay my collaborators upfront, because the archaic system solicits months in advance, with little or no confidence that there will be royalties to cover the production costs. So the main obstacle is getting access to money. People need to eat and make their art. 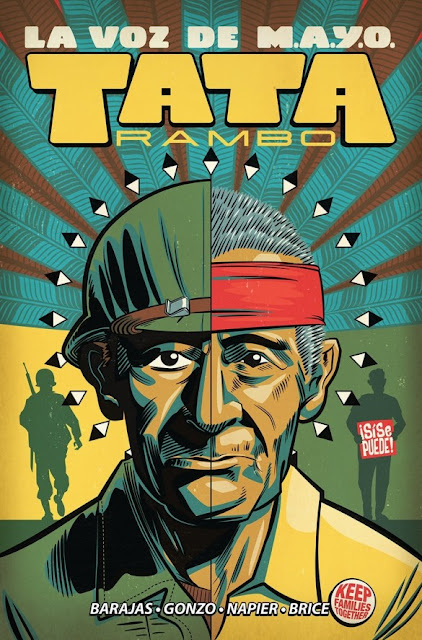 NOAF: La Voz de M.A.Y.O.: Tata Rambo (Image Comics, 2019) weaves together a piece of your family history with an episode of U.S. history. What was it like to write this book?

HB: It was not what I expected. My family's history was buried for so long. It caused a lot of anger and resentment with the powers that be that concealed Ramon's involvement in getting Interstate 10 moved to avoid displacing thousands of families while helping a Native American tribe that was one of the last to gain federal recognition.

Thankfully, I was able to hear directly from the Yaqui people about La Voz de M.A.Y.O.'s involvement―and talking to some folks who were directly involved was something special. Once you dive into the rabbit hole of all the times this country has wronged, it's hard to keep your head from spinning. It was a five-year journey that took a lot of time, youth, money, and gumption. I definitely will not do that again. But I say that and I've got plans to do something similar.

NOAF: What unique properties of the comic book format helped you in building the narrative of this book?

HB: There is something about the stillness of a comic book. I think it has a beautiful ability to hold your attention without a time limit like prose, but with artistic beauty. It's one thing to describe a Tucson sunset, but Gonzo made it the whole book's color palette. You can't hear the chants of the Native people making demands of the city of Tucson from the comic, but it can be as loud as you want in your own head.

NOAF: What has been the response from the public and from the Yaqui tribe?

HB: The general public's response has been what I thought it was going to be: shocked. Educators in Tucson have been very instrumental in showing this to their students. Librarians from all over the country have really done a great job with making sure this is displayed during Latino and Native heritage months. It was also seen for sale at the Smithsonian.

From the Yaqui tribe, it has been radio silence. Not surprising, since the group has been omitted from the history books.

NOAF: Is there any part of Tata Rambo's story that didn't fit in the book and you wish you could have included?

HB: Rambo worked with the local film and television productions to make sure there were actual Native people on set or in front of the camera. Due to time and funds, I wasn't able to logically add it to the graphic novel. 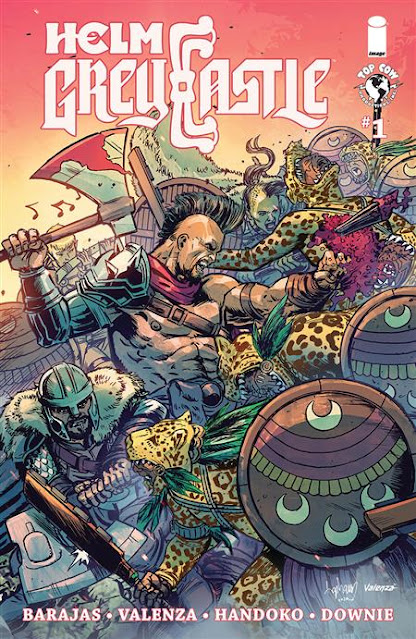 NOAF: More recently, you've been working on the fantasy series Helm Greycastle (Image Comics, 2021). What excites you about writing fantasy inspired by your own culture?

HB: It's refreshing. I wanted to show some range. I have been writing non-fiction, journalism stuff, for a while. It was important to me to prove to myself and to the comic book industry that I'm more than a Latinx writer. I have ideas and things to say that live outside of reality.

NOAF: What elements of Mesoamerican fantasy distinguish it from European fantasy?

HB: The setting is the big one. It's weird that Game of Thrones is in its own universe that excludes every kind of person that isn't white. I have a feeling that readers are going to pick this up and see the Tolkien influences. My mini-pitch for the series is "what if Mordor had a southside."

NOAF: White authors have often tried their hand at including Mesoamerican culture in their fantasy. What have they gotten wrong and what do you wish you could tell them?

HB: The best example is the hedonistic, mindless sacrificing from films like Apocalypto. Mesoamerican history isn't as widely popular as Greek mythology. There's a lot of educating when you try to tell a story like this. The suspension of disbelief is clouded by trying to understand the source material. Even the word "Aztec" is not the proper term to describe the people of Mexica. I felt like I needed a doctrine to even attempt to tell this story, but you have to move past that fear. Your reader is always smarter than you, and they will let you know when you screw something up.

NOAF: So far, Helm Greycastle has been announced as having four issues. Are there plans for a continuation?

HB: It's show business, so it lives and dies on sales. I need to sell the book and prove that there's an audience for it. If it gets picked up as a movie or television show, it makes it easier to tell more stories.

NOAF: Apart from La Voz de M.A.Y.O. and Helm Greycastle, where else have you published your creations?

HB: My favorite thing I've ever written was when I spent a morning drinking at The Buffet Bar. That was me doing a bad Joe Mitchell impression, but it's honestly my favorite thing on the internet.

NOAF: How does a comic book author make their work stand out in a market overstuffed with big franchises?

HB: I think it's important to cultivate a following in any way you can. I started it by telling a story only I can tell. La Voz de M.A.Y.O. opened doors for me. Trying to achieve a level of celebrity is futile, but it's somewhat necessary. I'm still trying to figure that out.

NOAF: Can you give us any details abour your future projects?

HB: I've got a true crime story in the chamber.

NOAF: Besides yourself, what other Latinx comic book creators should we be paying attention to?

NOAF: Any advice for young Latinx nerds who dream of one day publishing their stories?

HB: Don't listen to anyone who tries to limit you and your potential. If you need to tell a story, do everything you can to make it possible. Just tell the story. We need to hear, listen, and know it.