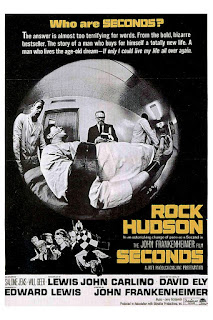 The premise of Seconds is solidly science fiction — a middle-aged, middle-manager type tired of his life allows a shadowy company to stage his death, give him a new face, a new name, and a new life — but the execution doesn't spend much time on the fantastic elements. Billed as a sci-fi movie, it actually unfolds more like a paranoid thriller. This feels natural since director John Frankenheimer's two previous movies were the paranoid classics The Manchurian Candidate and Seven Days in May.

The scenes inside The Company have an almost surrealistic feel to them, with unexplained rooms full of people sitting around and waiting for...who knows?...and offices with random people present, staring at the wall doing...who knows? This is essentially the extent to which the movie characterizes the science fictional or fantastic aspect of its tapestry. The main character, Arthur Hamilton, undergoes the surgery and recovery process, and emerges as Rock Hudson, well, his name is now "Tony Wilson," but as played by Rock Hudson. Rock Hudson was never one of those movie stars that pushed the boundaries of film acting, you might say — he always feels to me like Cary Grant, but not as witty or sharp-edged. He had a great role in Giant and did a good job with it. But he really surprised me in Seconds.

The bulk of the movie concerns itself with the reality of actually escaping oneself. Ok, let's just take as a given that some mysterious group can provide you with a new face, name, house, all that. But under the new exterior, you're still "you." And is it your circumstances that you were tired of, that made you want to go down this bonkers rabbit hole, or was it just...you? Beach house, servant, new girlfriend, sure, but can that make you happy? Can you really hit the reset button as easy as all that?

One of the most effective sequences in the film is also one of the strangest. Arthur/Tony goes with his new girlfriend, Nora, to a wine festival, and suddenly people start stripping off their clothes and dancing around in the wine vats naked. Arthur/Tony is repulsed at first, the way a middle-aged baner from 1966 might well be, but slowly lets himself go, allowing himself to get caught up in the moment. This is the first moment in the film where he really loosens the fist clenched around the idea of who he's "supposed" to be, and feels the freedom of this new, second chance at life. This sequence — and it has a lot of female nudity — was unsurprisingly cut from the American theatrical release, but has since been restored. I think without that experience, though, this would feel like a very different movie. From a character standpoint, I think it's an essential scene, and a lot would be lost without it. It's one of the only moments where I felt like I could start pulling for Arthur/Tony.

This is the most natural, and engaging performance I've ever seen from Rock Hudson. And he does a really convincing drunk, in one crucial scene. I have to wonder how much this role was informed by his real life as a closeted gay man. It feels like the kind of role, where he is having to hide his true self and can only let go in a couple of stolen moments, that he was probably living off-screen, as well. It is a heartbreaking idea to consider.

This movie did poorly on its initial release, but in recent years has bubbled up again. I first became aware of it because I am a big nerd for movie title design, and I saw the Saul Bass-created opening sequence maybe a couple of years ago. Criterion and the Library of Congress National Film Registry have helped raise the movie's profile recently, and I think it's well-deserved. It's an odd movie, and not perfect, but in the end, Seconds feels like an extended, darker-than-usual episode of The Twilight Zone. If that sounds good, you'll probably dig it.

Penalties: -1 for an outcome that feels like a foregone conclusion; -1 for the sort of blasé approach to the sci-fi setup

Posted by Vance K — cult film reviewer and co-editor of nerds of a feather since 2012. Emmy-winning producer, and folk musician.
Posted by vkotrla at 12:00:00 AM