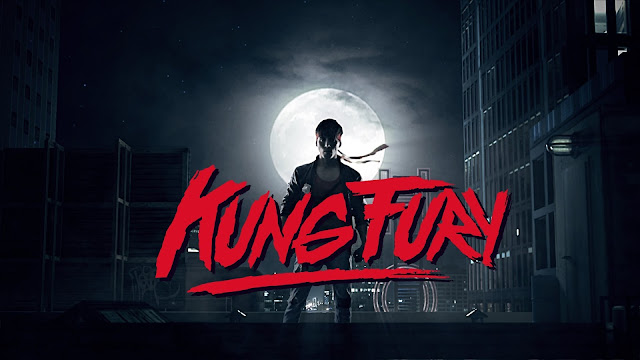 Like Turbo Kid, which I reviewed last week, Kung Fury is a parody of/homage to the low-rent action films of the '80s. Only this one's much heavier on the irony. See, for example, the plot:

Sometime in the early 1980s, Miami-Dade Police Department detective Kung Fury and his partner Dragon apprehend a red ninja in a back alley, but Dragon is sliced in half by the ninja while Kung Fury is suddenly struck by lightning and bitten by a cobra, giving him extraordinary kung fu powers that enable him to defeat his foe. Years later in 1985, after defeating a rogue arcade machine robot, Kung Fury quits the force when he is assigned to partner with Triceracop, fearing that he would lose another partner in the line of duty. Meanwhile, Adolf Hitler, a.k.a. "Kung Führer", enters the timeline and remotely guns down the police chief and attacks the precinct through a mobile phone. Intent to avenge the chief, Kung Fury has computer whiz Hackerman send him back in time to kill Hitler in Nazi Germany. A glitch in the system, however, sends him back into the Viking Age. After Kung Fury meets the Viking valkyries Barbarianna and Katana, the Norse god Thor sends him to Nazi Germany for him to finish his job.


Or consider the fact that Kung Fury (Sandberg) opens the doors to his Lamborghini Countach by shooting it. Or the scene where two Nazi guardsmen argue, in fake German (it's really Swedish) over who has the more Aryan mustache. Or the VHS glitch effects that periodically reappear. Or the fucking amazing Mitch Murder soundtrack, which features David Hasselhoff on vocals:

Indeed, Kung Fury may be the ultimate film for that certain kind of person who both seeks out a certain kind of ironic humor and enjoys a bit of '80s nostalgia--ironically, of course. For others Kung Fury may lay the insanity on a bit thick. Personally, I thought it was funny as hell, but also noted that, in comparison to Turbo Kid (and the comparison is inevitable), it's a pretty superficial film. And that was even more apparent second time I watched it, when all the surprises had already been sprung.

At the same time, Kung Fury is only 30-minutes long, which is just about perfect for what is, in essence, a superbly well done one-note symphony. Oh, and Kung Fury's partner, Triceracop? Yes, he is an anthropomorphic triceratops--something that remains thankfully unexplained. 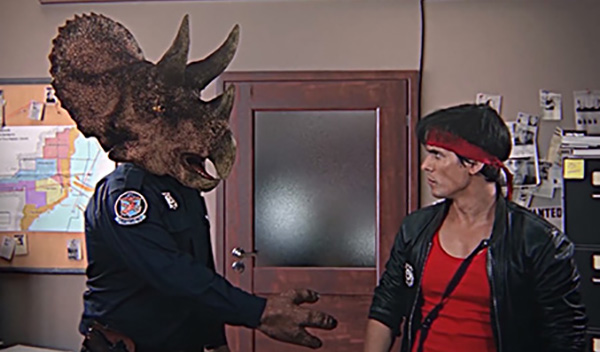 Bonuses: +1 for the concept of Triceracop; +1 for the amazing soundtrack: +1 for TOTAL INSANITY.

Penalties: -1 for the moment when the joke starts to get a bit old.