Microreview [book]: Paying for It

A guy gets drunk in Edinburgh and sometimes he investigates a murder. 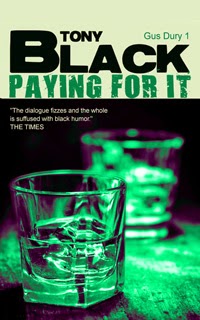 I never really know how to write a bad review. I know how to write a review badly, but I’m never sure what to do when the book I’m reviewing wasn’t great, but I have to write something because I offered to post a review and this was the book that was on deck. I could trash the book, but that’s pretty much what the internet does. Plus, there's not much to trash, per se. I could write about something else—and I’ll do a bit of that here. Or I can just limit myself to legitimate critiques and keep it at around 700 words.

Paying for It, from Scottish crime novelist Tony Black, avoided the P.I. trope. That was a thing I liked about the book.

Gus Dury is a disgraced former journalist who drinks. His local bartender asks him to look into his son’s recent death—officially a suicide, despite suspicious circumstances. Gus accepts. We soon learn that the dead kid had been involved with Russian mobsters and dabbled in human trafficking. And so on. In many respects, this is a straightforward update of classic detective fiction—there’s the blond femme fatale, one His Girl Friday, some mildly flamboyant gangsters, a case the cops won’t touch. But Gus isn’t a P.I. Instead, he’s an opinionated drunk. Which is basically a P.I. without an office. But still not a P.I.

Some of the themes and character tropes in Paying for It rubbed me wrong. First, Gus Dury is an opinionated bastard. I’m not much of a fan of British music, movies, fiction—I do like their comics—so maybe that partly explains why Gus’s opining annoyed me. I am American, after all, and thus I assume we know better, even about comics. But it’s more the way Gus reminds me of an aging hipster, bitter about no longer being cool, about not understanding what cool is anymore. (Black does nothing to derail this impression.) And he’s roughly my age. Like Gus, my cultural tastes haven’t been refreshed much in the last few years. And yes I too have lectured people younger than me about things they should love—I am one class away from assigning The Road Warrior to my students. So yes, what I didn’t like about Gus are things I don’t like about me: I’m aging, I don’t like new music, I think kids are dumb. (Though I also think we were dumber than we remember and probably just as dumb as the kids currently and objectively are.)

Paying for It also featured alcoholism, the most annoying trope in crime fiction. Actually, second most annoying. (#1: the P.I.) I complained about this in my last review and I have complained about it before, but the alcoholic protagonist needs to be retired. Or drink a bit more responsibly. At least Black is realistic in his portrayal. Gus drinks, a lot. But he gets drunk. He feels like shit. He struggles with his alcoholism. He even tries during the book to dry out, though he ditches that plan quickly. I appreciate that Gus cannot drink obscene amounts of alcohol and continue working on a case. In fact, he doesn’t do a whole lot in the novel because he’s sitting around drinking and opining. It would have been more enjoyable had he been wittier or had better opinions. But, he’s a bitter drunk. In his later-mid-thirties. And the nineties were good.

Fortunately for Gus, the plot happens to him. Conveniently. Much of the story’s development entails Gus walking down the street and running into someone he knows who tells him something he needs to know. I’ve never been to Edinburgh. (Had plans to, but with the British pound trampling the dollar and all…) I doubt that in a city of 500,000 you randomly run into that many friends. While I do run into people here in Los Angeles—more often than one would think—they never have anything interesting to say, much less clues to offer that’ll break the case wide open. But, perhaps Edinburgh is a different place. I hear it was better in the nineties.

I can’t say that I hated this book, but I didn’t relish reading it. And this ultimately is the only criteria that matters. I’ll let a lot slide if I’m entertained. But a sluggish read gives me time to critique a novel. Paying for It was a slow read at 279 pages. It wasn’t so bad that I now refuse to read anymore installments from Tony Black. But the next one will probably sit on my shelf for a minute.

Penalties: -1 for alcoholism; -1 for making me feel old