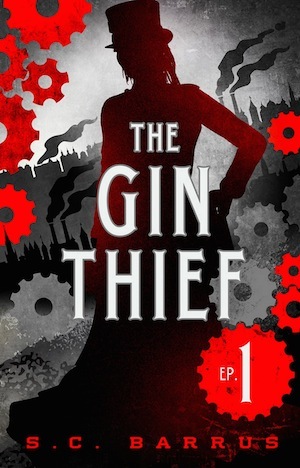 Author-publisher S.C. Barrus, who contributed a guest blog post to Nerds of a Feather on isometric gaming, is also the author of the steampunk novel Discovering Aberration. You may remember this book as a top pick of our monthly Adventures in Indie Publishing correspondent D.E.S. Richard, and it appeared on my Summer Reading List (I'll finish it soon — it's long!). Discovering Aberration is the product of a successful Kickstarter project, and now Barrus is ready to release his follow-up.

Set in the same world, The Gin Thief is a serialized novel, which is just a super cool thing to be doing, and in itself pretty steampunk. Kickstarting a 19th-century publishing platform? Put some goggles on it and you're already 9/10 of the way to the Steampunk Hall of Fame. The project is already funded, and will only be online for a week, so it's simply a good opportunity to pre-order these books and get a copy of Discovering Aberration along with it.

So take a look, and become a backer if it seems interesting, tossing some support behind self-published authors who are delivering quality and outside-the-mainstream ideas.

Posted by Vance K — cult film reviewer, occasional book reviewer and general pontificator, and Nerds of a Feather contributor since 2012.
Posted by vkotrla at 10:46:00 AM