On the fuzzy ecologist parable that is 'Strange World' 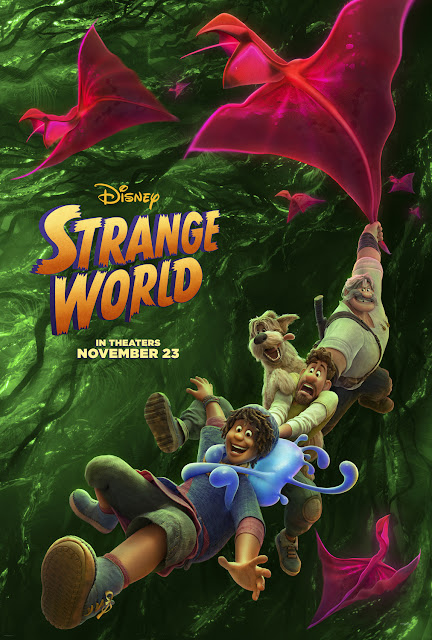 In the Fishlake National Forest in Utah lives a massive, ancient creature estimated to have reached 108 acres in size and 6,600 tons in weight. It is composed of more than 40,000 trunks of aspen trees, all of them born from a single shared root system. Each individual tree lasts about a century, but the entire clonal colony may have existed for 14,000 years. Its name is Pando, and it is the target of a dedicated conservation effort.

In Disney's new fantasy movie Strange World, there's also a plant named Pando. Its interconnected roots extend into a hidden land underneath the mountains. Its fruits are a miraculous source of electricity that turned a small cluster of agrarian villages into a technological utopia within the span of one generation, so of course a desperate expedition is arranged when a mysterious pest threatens to rob this community of its fix-all crop. However, by the end of the second act, when the true nature of Pando is revealed and the true mission of the heroes is announced, the choice of name doesn't sit right anymore, and the viewer is left to wonder what symbolic role this plant was supposed to play. This confused metaphor is at the core of the movie, which hurts its effectiveness as the didactic vehicle it wants to be.

To be fair, there's much to praise about Strange World. The story goes out of its way to ensure that a lead character's queerness is not easily removable for the Chinese market; in fact, Disney will not bother sending the film to Chinese censors, a rare and overdue move for the usually puritanical studio. The story is set in a secondary world populated with varied ethnicities, sexualities and ability statuses, all of which are accepted as unremarkable. The focus characters undergo a laborious unlearning of toxic parenting practices. There is a shared, albeit not strong enough, thematic thread between the larger warning against attempting to control nature and the smaller warning against attempting to control each other. The new, fascinating lifeforms are not there to be tamed, but to be respected.

All these traits add up to a refreshing degree of maturity. The old and tired Hero's Journey is given a twist with a more thoughtful resolution. There is conflict in the traditional sense, but it is not defined in terms of victory vs. defeat; instead, we get the more interesting revelation that all along there has been an ongoing conflict that is unwinnable for everyone. All through the movie, a distinctly indigenous sensibility can be identified regarding humankind's place in nature. The big moment of catharsis is not about slaying a monster, but about gaining deeper understanding of that which appeared monstrous.

With so many great ideas, it's tricky to unravel why the end result doesn't feel quite as impactful as it should. It may be useful to begin by considering the aesthetic. Strange World is clearly inspired by the extraordinary voyages of early science fiction, a tradition that extends from Jules Verne to Edgar Rice Burroughs and that survives in nostalgic form in the likes of Indiana Jones and Jack Sparrow. Accordingly, the film uses a vivid palette, with oversaturated tones reminiscent of pulp magazine covers. The effect is completed with assorted rusty machines and alien beings of incomprehensible anatomy.

This choice is not motivated merely by nostalgia. Strange World is engaging in deliberate conversation with an era of adventure fiction that promoted a proudly colonialist worldview. The characters of Jaeger and Searcher embody complementary styles of human predation of nature: the conqueror and the settler. While Jaeger yearns to open a path with fire to the ends of the earth, his son Searcher is content with instrumentalizing nature to maintain a comfortable standard of life. They believe their lifepaths are opposed, but in reality, they both see nature as something that must bend to human will. Jaeger does it by spreading the human footprint; Searcher does it by facilitating consumption. It is the third generation, Ethan, which breaks the cycle by letting nature take the lead.

Where the message gets muddled is in the particulars. The crisis in the plot is the danger of losing an abundant source of energy, much like the real world is starting to deal with the prospect of peak oil. But in Strange World, the decision to switch to a less destructive energy source hinges on knowledge. As soon as the characters learn that their way of life is hurting the world, there is no further discussion. The next step is obvious, and everyone agrees. It sounds hopeful, but that's not how energy policy works. An effective metaphor for our environmental woes would have to acknowledge the roles played by deliberate misinformation, collective inertia, political opposition, ideological fanaticism and plain old greed. The reason we haven't abandoned oil isn't because we don't know oil is bad. We know oil is bad. The true reason is much more convoluted, and Strange World sends an incomplete message if it intends to teach young viewers that becoming aware of the problem is all that is needed.

This is not an unfair demand to make of children's fantasy. Today's Disney is perfectly capable of telling a story with the required complexity. It's been years since Pocahontas whitewashed the history of colonialism. The growth is visible: Lilo & Stitch didn't sugarcoat the anxieties of working-class orphans; WALL-E didn't flinch away from the horrors of carefree consumerism; Tangled built a devastating portrayal of toxic parenthood; and more recently, Moana gave a master class on how to tell an environmental fable with no villains. Disney has already proven they know how to do this. There's no excuse for Strange World to reach Avatar levels of visual gorgeousness but not avoid reaching also Avatar levels of narrative basicness.

That's where Strange World earns its proper claim to memorability: landscapes, creatures, machines, horizons. The screen explodes before the viewer's eyes in dazzling shapes that span all textures—viscous, rocky, fluffy, gelatinous, porous, fleshy, scorching. In a brief scene, a character sticks their hand inside a cloud, and it almost feels like the viewer could, too. In terms of animation, Strange World spared no effort to make this alien setting come to life in full, rich, radiant color.

However, the plot doesn't challenge the viewer or itself, opting instead for an extremely straightforward family drama that hesitates before the easy step of making the big journey reflect the inner journey. The youngest viewers will doubtlessly leave the theater delighted by the feast of imaginative visuals, but those who have already started giving thought to environmental science will be left wishing there were more substance to chew on.

Penalties: −2 for oversimplification of a problem that extends beyond mere knowledge, −2 for failing to integrate organically the theme of teenage maturation into the larger theme of environmental responsibility, −2 for neglecting its secondary characters.