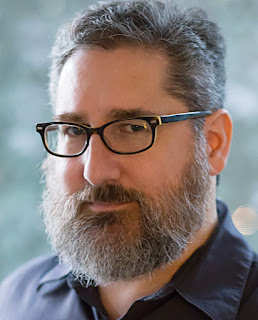 Keith Ammann has been a Dungeons & Dragons player and DM for more than thirty years. He has been writing his fifth edition D&D–focused blog The Monsters Know What They’re Doing since 2016. He lives in Chicago.
Today, he tells us about his Six Books:

I’m in between books at the moment, in large part because lately I keep picking up books, reading a couple of chapters in and then deciding I’m in the mood for something else. But over the past year, I’ve read and loved Prisoners of Geography: Ten Maps That Explain Everything About the World by Tim Marshall, The Final Revival of Opal & Nev by Dawnie Walton and the third book in Ken Liu’s Dandelion Dynasty saga, The Veiled Throne.
2. What upcoming book are you really excited about?
I have N.K. Jemisin’s The World We Make—the sequel to The City We Became—and Erin M. Evans’ Empire of Exiles on preorder, and I’m also psyched to read the fourth and final Dandelion Dynasty volume, Speaking Bones. I can’t overstate how much I love the Dandelion Dynasty saga. Also, I just learned that Ian McDonald has a new one coming out, Hopeland. That’s another I’ll be picking up for sure.

3. Is there a book you’re currently itching to re-read?
Not “itching” per se, but I’ve been thinking recently that I ought to go back and reread Ancillary Justice by Ann Leckie, to see how much of the mind-blowing quality of reading it for the first time I can recapture—and also to try to pick up on details I missed or have forgotten about, because, let’s be honest, that book is more than a little bit disorienting.
4. How about a book you’ve changed your mind about – either positively or negatively?

The first time I read it, Lev Grossman’s The Magicians left a bad taste in my mouth. Sometime later, I read it again with the understanding that the characters in it are not good people and that I shouldn’t be rooting for them or even sympathizing with them at all. That realization made it a much better book.


5. What’s one book, which you read as a child or a young adult, that holds a special place in your heart?
I first picked up the 1977 Del Rey edition of Hope Mirrlees’ Lud-in-the-Mist as a teenager in the ’80s and have read and reread it every several years since. It’s a masterful mélange of high fantasy, sociopolitical satire, cold-case murder mystery, and commentary on life and death and art, written in a cheeky, Austenesque voice. As more of a remixer than an original creator, I’m drawn to a good mashup, whatever the medium, and this one remains my favorite book of all time.

6. And speaking of that, what’s your latest book, and why is it awesome?
How to Defend Your Lair is about rethinking the way we design locations in tabletop roleplaying games to reflect how people defend themselves and their assets in the real world: focusing the most attention and resources on whatever’s most valuable and vulnerable; examining the different types of value that assets can possess; and making sure that detection, deterrence and response measures are all included. Because we have to work within limits and can’t eliminate risk entirely, lair owners have to make informed guesses about where to focus their defenses—and players then have to figure out where the weak spots might be.