Nanoreviews: Monkey Around, A Marvellous Light 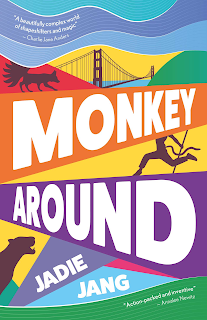 Monkey Around by Jadie Jang (Solaris)

Monkey Around is the debut from author Jadie Jang (aka Claire Light), an American urban fantasy which puts a ton of thought into "what would a secret group of mythical figures who live among humans look like in a nation formed of waves of immigration?" Protagonist Maya lives in the San Francisco of 2011, where she divides her time between volunteering for the Occupy movement, working at the local supernatural hangout, and running an Asian American magazine. She's also trying to work out exactly what's up with her weird blend of shapeshifting and reality bending superpowers: as a mixed race Asian adoptee with minimal ties to her birth culture, Maya has been dissuaded from trying to pursue her heritage too directly, but that doesn't mean she's not interested in knowing what, exactly, she is. (The reader will know, from the first sentence if nothing else, that she's an incarnation of the Monkey King... but Maya's going to take her time getting there, and you'll have to go with it.)

When shapeshifters start getting murdered, and a handsome crush enlists Maya and her boss Ayo to track down his sister, Maya finds herself drawn into a dangerous plan involving a powerful magical artefact: a stick that appears to have a weird hold on its owners. Maya's hunt for Chucha - a Nahual shapeshifter whose culture stems from the Aztecs - brings her into the orbit of said crush and his family dynamics, and when the shapeshifter murders start to take on a more personal turn, everything comes together in a neat, entertaining mystery, with Maya's strong narrative voice making the whole thing a very enjoyable read. There's a lot of set up for later instalments here: in particular, there's a second love interest who remains mysterious (BUT TOTALLY SUPERNATURAL) and there's clearly going to be some choices further down the line. While I'm not totally enamoured with those dangling plot threads, I am definitely on board for more of Maya's journey of self-discovery, and I'm excited to see where future books take the whole concept. 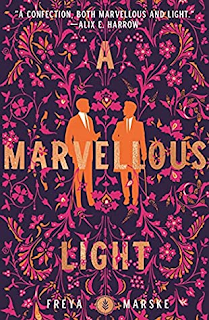 Freya Marske's fantasy romance had a lot of buzz in my circles, and I'd be lying if I said I wasn't attracted by that cover alone: it's so pretty! So colours! Set in a version of England where magic is real and runs in old, wealthy families who go to some lengths to conceal themselves from the rest of society. Robin Blyth is a young baronet working at the civil service, trying to build a career in the shadow of his deceased parents' complicated legacy. When someone with a grudge against him appoints him to a bizarre, unheard of cabinet post after the disappearance of its former occupant, he isn't expecting to end up as liaison to a magical world he had no idea existed. His magical counterpart Edwin Courcey certainly isn't expecting a completely non-magical person to end up in the post, and before anyone can wipe Robin's memories and leave him none the wiser, he ends up the recipient of a strange, painful magical curse. The only solution lies in Edwin's family library, but that means Edwin needs to return to the family that consider him a weak disappointment, and try to shield Robin from the excesses of his sister and her gang of blustery, overzealous friends. Also, Edwin thinks Robin is cute, and Robin thinks Edwin is cute, and this being Edwardian England complete with period-appropriate homophobia, that takes some time to figure out.

A Marvellous Light is very, very good fun, driven by two characters who it's impossible to not want good things for. Both Edwin and Robin are a mess in quite different ways before coming into each others' orbit, and the way Robin reaffirms Edwin's magical talents is particularly noteworthy, hitting a lot of great emotional beats and creating a magical world full of stuffy, narrow thinking that we want to see both men triumph over (also, their sisters and female colleagues should triumph over it too - the other dudes can mostly fuck off). More books are planned, although as this is a romance series they will be following different characters: there's more of this world I'd like to see fleshed out, but this is a jolly entertaining way to kick things off.

Read the full review of A Marvellous Light by Roseanna here!