The problem with 'Finch' is that it's scared of scaring you 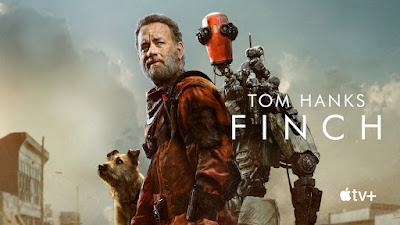 In a world of ghost cities and failed crops, long after a solar flare has burned the ozone layer and fried the electric infrastructure, where the light of day is lethal and the night keeps hidden terrors, a lone survivor with terminal radiation sickness builds an intelligent robot to take care of his dog after he's gone. Just when the robot is awakened, a conveniently-timed superstorm forces them to leave their shelter, turning this survival drama into a buddy/road comedy. Our protagonist only has a few days left before he can teach this robot how to feed and protect and love a dog. But this artificial tool is also the first conversational partner he's had in years, which means that he'll eventually open up and confront the shame and guilt he's been carrying since civilization burst into chaos.

Put like that, Finch sounds like powerful drama. With a star as capable of delivering endearing sadness as Tom Hanks, and a composer of the majestic stature of Gustavo Santaolalla, it should be a gut punch straight into the viewer's feelings.

Instead, Finch comes off as unsure of how much it wants to commit to the seriousness of its premise. There are hints of greatness here and there, but as soon as the emotion has reached the right measure of suggestive evocation, the script ruins the moment with embarrassingly unpolished lines that muddle the tone and explain too much. The movie isn't content with letting you feel the story; it tells you precisely what you're meant to feel. It both begins and ends by playing American Pie, which by now is the most unsubtle allusion to American decay available to movies, but it gets worse than that. Finch tells its plot like it regrets having to tell it, like it's very sorry to make you think of sad things. So every time it gets bitter, it hurries to coat itself in sugar.

One reason for this strange emotional incongruity comes from outside. During the final stages of the production of what should have plainly been a movie about the end of the world, the actual end of the world happened, and the director reacted by shying away from making viewers too anxious. So he rewrote the ending, hinting at a world that had started healing and a humanity that could still be saved. However, this choice moves the focus too far from the personal tragedy of the protagonist. He's a man who knows he's going to die, whose only remaining goal is to keep alive a dog that, for all he knows, matters to no one else, and that will also, one day, die. That should have sufficed to make this an impactful story. We can be moved by the poignant futility of his love, by the determination with which he extends his sense of responsibility beyond his individual lifetime, by the absurdity of going to the trouble of creating a whole artificial intelligence with the sole purpose of serving an animal. We can empathize with the devotion it must take to spend one's last days dedicated to the effort of protecting a fragile creature that has no clue its life is doomed. There's a heroic beauty to that idea.

But the director of Finch believes you've cried enough this year, so what we get is an Introduction to Humanity for the benefit of the robot character, and by extension, for the edification of the audience. Instead of exploring what it can mean for a robot to have been brought into existence with a single, narrow purpose, the movie uses this character as a didactic vehicle to preach optimism in the face of disaster. There's definitely a place for that kind of message, but it's not in this movie. Finch wastes the story it could have been out of a misplaced sense of obligation.

Bonuses: +2 for the soundtrack by Gustavo Santaolalla, a master of giving stories the atmosphere they need.

Penalties: −2 for not trusting the viewers' intelligence and spelling out every bit of the emotional subtext, −2 because pop culture seriously needs to stop giving Asimov's rubbish laws of robotics any further credence.