K.D Edwards' The Last Sun is an intriguing Urban Fantasy that uses genderqueer characters and the story of Atlantis to tell an intriguing magic-infused story. 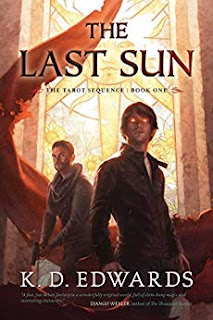 In a world very much like ours but where Atlantis existed, and existed into the modern era until the survivors of its fall emigrated to a new home in the New World, a scion of a fallen House is wrapped up in mystery and intrigue, as rivalries, schemes and long set plans collide with that scion’s destiny and coming into his true power.

Rune Sun is the last of his kind. House Sun, his tarot card named noble family, has long since fallen and he is the only survivor. A  sword fighter and a sorcerer, he lives doing odd jobs here and there, a down on his luck existence especially given the wealth and power of his peers, and of his life, long ago. It is doing one of those odd jobs, against another noble House, that Sun gets hooked into an intrigue that extends across New Atlantis. That hook, too and just might provide an opportunity for Rune to prove and show his capability and true abilities. If it doesn’t wreck his homeland or get him killed first, that is.

This is the world of K D Edwards debut novel, The Last Sun

There are lovely notes of worldbuilding throughout the novel, although sometimes they didn’t quite come in the order I’d hope for or in the time I really was looking for those answers. Almost as if Quinn, the Seer, was dishing out the worldbuilding, some questions remained frustratingly out of reach and unanswered until later in the novel. I really wanted to know how the world got the way it was, I wanted to know all about how the Atlanteans lost their island home, and got to their new place. And for the most part, the answers are a bit vague, almost a bit too much. But if you are going to have an Atlantis and sink it, I want to know all about it.

Aside from those concerns, we get a New Atlantis which has an uneasy relationship with the rest of the modern  world. The hints we are given seem to suggest the history of the rest of the world has not been drastically changed by the presence of Atlantis in history but aside from some reference here and there, the outside world doesn’t matter too much to those who dwell in New Atlantis.

Instead, the worldbuilding of the novel focuses on how the magic and major figures of New Atlantis, The Arcana, work, and the structure and strictures of Atlantean society. Atlantis is a high magic society in a world where technology from the outside world works as well. We get plenty of detail and exploration of how and why magic works, and get to see it in action. The Sigil concept as a way to hold and use spells helps ground the characters and provide a tangible hold for the reader on understanding the capacities and limitations. This magic also scales and maps well with small scale action, so that we get excellent high magic and also excellent action and adventure that jumps off of the page.

That high magic we see through the sigils give those action beats in The Last Sun a Dresden Files crossed with Shadowrun sort of feel. All of the major characters have those sigils, and are very willing to use them in the many set piece engagements in the novel. The book is full of confrontations and adventures, liberally planted throughout the narrative so as to keep the tension going. The author also likes to use the action beats to inform and develop his characters, we often best see the personalities and choices and what they stand for by what they do when their lives are on the line.

There are a slew of those intriguing characters to be found fighting those battles. Above and beyond Rune Sun, the protagonist, the best of these is his bonded companion, Brand. The two of them make a duo who clearly have been together through thick and thin, and some very dark times in the backstory of the novel as well. They have a great, snarky, back and forth relationship that is a treat to read. Other characters of various social ranks and relationships come into the double planet system of these two characters and out again. Even though the point of view of the novel stays with Rune all of the time, I truly felt that Brand was his “other half”, just as his companion bond meant to invoke. Another character I particularly liked that we only see some of is Ciaran, another scion with power over Dreams, who wanders into Rune’s story but clearly has a history and agenda and life of his own beyond the bounds of the novel.

Despite the issues I had with some elements, The Last Sun makes for an intriguing and immersive debut novel, and I look forward to more novels about New Atlantis, Rune Sun and those around him.
---

The Math
Baseline Score: 7/10Bonuses: +1  For a strong set of intriguing characters
Penalties: -1 A few gaps in the world and worldbuilding frustated me a bit
Nerd Coefficient: 7/10 an enjoyable experience, but not without its flaws