This past week I had the good fortune of attending the Alita Experience with my family and watching the new movie from Robert Rodriguez and company. After hanging out with my family at Kansas Bar and solving some puzzles in Iron City, we were excited to check out the movie. We were all pleasantly surprised with the movie and hope that it does well enough to bring us a sequel. I have been reading the manga on ComiXology Unlimited and am impressed with the movie adaptation. Now I need to track down the anime from the 90's. 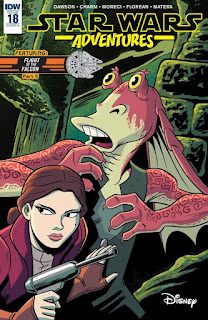 Pick of the Week:
Star Wars Adventures #18 -  This all-ages book continues to entertain as we are treated to some classic Jar Jar hi-jinx!  You may not have the same affinity for our clumsy Gungan friend, this short story focuses on Amidala helping Jar Jar find a lost treasure for Boss Nass. We are treated to a series of tests that Amidala conquers with her wit and bravery and Jar Jar stumbles through despite being a bumbling fool. If you don't want any Episode I flashbacks you may want to steer clear of this title. If you have a soft spot in your heart for Jar Jar and the intent of Episode I like I do then this will be right up your alley.

The Rest:
Sharkey The Bounty Hunter #1 - Mark Millar's partnership with Netflix continues with a sci-fi mini-series featuring a Bounty Hunter and his 10-year old buddy he agrees to take across the galaxy after arresting his uncle. Millar does a nice job introducing us to the seedy world that this series exists and to a cast of characters that are going to plan a big role as a billion dollar bounty has just been announced. While on paper it sounds a little Cowboy Bebop/Firefly-ish, I have a feeling that Millar will push the boundaries on what Netflix will allow him to produce and the story is likely to be more succinct as this is being developed into a film. While I wasn't blown away by the first issue, I am intrigued enough to see where this is headed. It felt like I just watched a pilot that I am green-lighting for a full season.

Wolverine: Infinity Watch #1 - With a cover like this there was no way I could avoid this book and am somewhat confused and itching for the next issue. Gerry Duggan gives the readers a quick summary of the events that have happened in the Marvel Universe over the past year and with how many times the Infinity Stones have re-written things, brought people back from the dead, and countless other changes, I am at a bit of a loss.  Having said that, Wolverine is back and the Infinity Stones have now been fused with the souls of select individuals thanks to Adam Warlock. It seems a new quest for the stones is upon us and I do enjoy a good quest. First stop is my home state of Texas to boot!

Guardians of the Galaxy #2 - When we last left this title a while back Thanos' body, minus his head, had just been taken by the Black Order following his death. Gamora, who just killed Thanos, fled after she nearly destroyed the world. Thanos had a plan to avert death by uploading his conscious into a worthy host and it is feared that Gamora is that host. The Black Order seeks to kill Gamora and the newly formed Guardians is leaning towards saving her. That is if Starlord can come to grips with the fact that Gamora "killed" him.