This past week I got The Legend of Zelda: A Link to the Past graphic novel in the mail that I forgot I preorderd.  It is a beautiful collection of a 1992 manga that I am looking forward to reading soon.  When I begin to question the influence I have on my two kids, Henry and Zelda, I need look no further.  Henry is in first grade and has to read 30 minutes independently each week.  I can't help but wonder how she is going to react that Henry read an old Zelda comic this week.  He is really enjoying it and I just hope it is appropriate for an 8 year old to read.  I guess I will find out when he finally lets me have a turn. 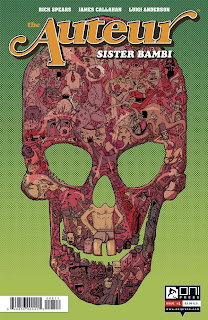 Pick of the Week:
The Auteur: Sister Bambi #1 - The Auteur is back and I had no idea how much I missed the insanity Rick Spears pours into each issue.  Following the destruction of President's Day, Nathan T. Rex is desperate to find some funding for his next masterpiece.  Not concerned about where the money comes from, Rex finds himself in the compound of Nazi triplets who want to force Rex to create a Women in Prison Nazi Propaganda film.  Spears crams this follow-up series full of the usual low brow humor, over the top gore, and pure insanity that fans of the first series are sure to enjoy.  Definitely one of the most unique and entertaining comics I have read for some time.  Welcome back old friend.

The Rest:
Darth Vader #5 - Oh what a tease.  It seemed as if we were going to witness Vader in all of his glory with each turn of the page, but we will have to wait until the next issue.  Vader is out to kill anyone he suspects of being his successor.  He quickly learns that Luke isn't the only one who doubts the value of the Force and thinks its nothing more than a hokey old religion.  Apparently the Emperor has enlisted the help of an android who feels progress is the future and the Force is the past.  Very much looking forward to the battle royale that will open the next issue and still enjoying Marvel's handling of Star Wars.

Saga #28 - This issue stressed me out.  As a father it was very stressful to see Hazel taken away and Alana incapable of doing anything.  Why do you do that to us Brian K. Vaughan?   Nothing seems to be going well for anyone I care about in this series.  Marko and his crew are under attack, The Will is dying, and Hazel?!?!  On the positive note, I learned that The Stalk has a brother who is more concerned about raising his family than getting involved with this nonsense.

Secret Wars #2 - I decided to give Marvel's latest Universe changing event one more try and wish I had my $4.99 back.  I will say they packed in enough content to warrant the hefty price, but it just isn't my scene.   The reveal at the end was pretty cool, but it felt like a ploy to launch a new series called Battleworld.  That's right, the duking it out to see what Earth survives is taking place on Battleworld.

Birthright #7 - Very interesting issue of Birthright from Joshua Williamson.  It didn't take itself very serious and some humor was injected along the way as we grapple with the relationship with Mikey (who is possessed) and his brother Brennan.  Things were quite disjointed and surprisingly light until Williamson drops the hammer on the last panel and reminds us that this is a serious tale indeed.   This issue almost felt like a magic trick and at the end we learn that things aren't as easy as they seem.  Good series that warrants starting at the beginning.