We are another week closer to Halloween Comic Fest and just saw another solid week of comics. Ed Brubaker gives us his last issue of Captain America, Mind MGMT concluded its first arc with style, Marvel released a one shot entitled A Babies vs. X-Babies, and the Court of Owls continues in Talon #1.  Please hit me up on twitter as well at @newhousebailey. 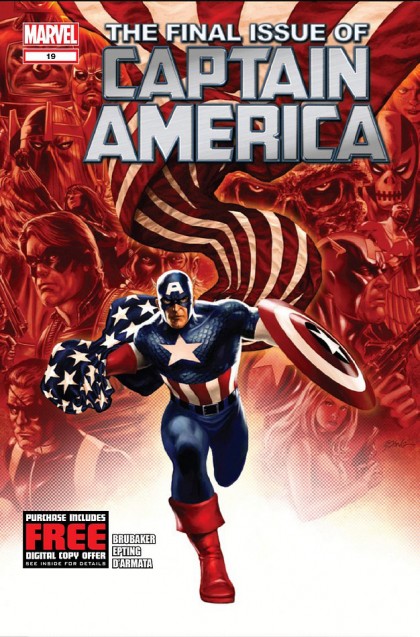 Captain America #19 – Ed Brubaker concludes his epic run of Captain America by wrapping everything up in one pretty package. Brubaker’s run was what got me hooked on Captain America and this issue is a great example of why. The ending is fitting, tight, and emotional. The flashbacks we see show the tremendous amount of respect Brubaker has for Captain America, which was demonstrated month after month with him at the helm. Recapping the past, bringing in the present, and ending with an open door for the next creator, Brubaker’s legacy with Captain America will be difficult to top. Thanks for the stories Ed!

Mind MGMT #6 – Matt Kindt wrapped up his first arc of Mind MGMT with a great twist that has me poised for its continuation. We learn more about Meru and Henry’s past and the great power that the immortals possess. Kindt has been praised for his book being a work of art and it is well deserved. The care and attention that he puts in his book, from the design seeming to be a Mind MGMT file, the watercolor art, and the snippets at the end that show other Mind MGMT agents, make this well worth the $3.99 it costs each week.

The Not as Good:

Bravest Warriors #1 – Pendleton Ward of Adventure Time fame launched a new series with Kaboom! in Bravest Warriors #1. I am guessing I will take some flack for this, but as much as I want to get into Pendleton’s creations I just can’t. I love his character design and style, but this book fell flat in delivering. The humor seemed too grown-up for kids and too kiddy for grown-ups. I want to partake in the joy that he brings so many, but I simply don’t get it.   I would love for someone to comment on what I am missing.

Fables #122 – The Cubs in Toyland arc ended last issue and Bill Willingham and the Fables crew decided to begin a 2-part story featuring the Big Bad Wolf before his entry into the mundy world. This is a great book for non-Fables readers to give what has been one of my favorite series a chance.

A Babies vs. X-Babies – In a most bizarre idea, Marvel somehow green-lit this spin-off of Avengers vs. X-men that is light and full of fun. I had no expectations in picking this book up, but Skottie Young really comes through with a fun book that has some memorable images of your favorite superheroes batting it out as babies. I am guessing this won’t be any Eisner material, but it was definitely a good time.


Talon #1 – The Court of Owls story in the New 52 Batman was one of the most enjoyable arcs I have read featuring Batman in a while. The first issue starts off with a bang as Calvin Rose, former Court of Owls assassin, returns to Gotham in the wake of their near demise from Batman. This is his one chance to finally take down the Court and earn his freedom. He encounters help from a mysterious figure who is seemingly going to assist him in this task. I think that there will be a lot of good action in this title. I am in for the next issue.

Punisher: War Zone #1 – It sounds like this mini-series started off on the right foot with some interesting interaction between the large cast of characters. There is tension between the Punisher and Spider-man in what appears to be a character driven series.

FF #23 – Hickman was able to bring all of the characters full circle in a fitting conclusion to the series that may leave some in tears. It seems that he also was able to reach a conclusion that truly closes the door and leaves fans pleased and appreciative with the care he gave the series.