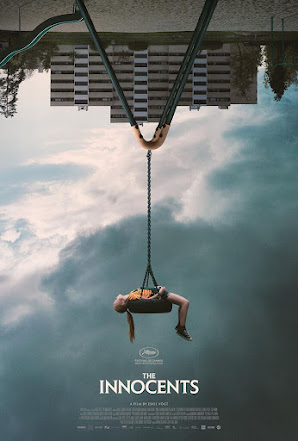 The Norwegian supernatural thriller The Innocents, shown last year at Cannes and available now on video on demand, is a much-welcome palate cleanser in the middle of the flashy superpower extravaganza we're currently enduring, and also an understated exploration of the limitations of the cultural trope of childlike innocence.

The story hooks early, with an immediately fascinating protagonist in Ida, a nine-year-old girl whose older sister, Anna, has nonverbal autism. Ida has never experienced consequences for her casual cruelty toward Anna, and that has taught her a seriously warped pattern of behavior. When her family moves to a new apartment complex, Ida forms a dangerous friendship with Ben, a boy with quickly growing mental powers and a similarly twisted sense of fun. At first, they move pebbles in the air and snap branches. But soon they graduate to animal torture and petty acts of revenge. When they're joined by their neighbor Aisha, who can read minds, the games escalate into psychic duels and puppeting people's bodies. Are these kids innocent, or is there something rotten underneath?

Scandinavia is frequently cited as the world's best place to raise children, and the Nordic model of parenting is famously based on trust-building and gentleness. The parents we see in this film are likewise kind and understanding, and strive to teach responsibility and independence with realistic boundaries. This cultural trait is even more curious if one recalls that Scandinavia was traditionally ruled by Protestantism, one of whose core doctrines is the inborn depravity of humans.

Almost as if to complete the counterargument, The Innocents plays with this widespread belief that Nordic childhood is idyllic, and complicates it in thought-provoking ways. It's not from her parents that Ida has learned to mistreat Anna; it's Anna's silence which leaves open a space that Ida uses to indulge her impulses at leisure. She even seems aware that what she's doing is wrong, but we never get a sense that she acts from actual malice. This makes Ida an exceptionally complex character for her age, and the actress does a fantastic job of conveying a sinister side at the same time as pure playfulness. Interestingly, after Aisha's mental powers give Anna a channel for communication, Ida goes through a gradual change that brings her closer to Anna and in opposition to Ben.

Ben's case merits attention for its own reasons. He's on a trajectory parallel to Ida's, one where raw id is unhindered by morality, but what fuels his cruelty is his mother's abuse. He has actively been taught to cause harm. We can more readily understand why he's the way he is, but when paired with Ida, we are made to wonder how children of such drastically different parents can become equally monstrous. The spark of the whole conflict is precisely Aisha, whose superpower is what the other kids lack: empathy.

The movie achieves all this with incredibly few lines of dialogue. Most of the weight of the storytelling is carried by the camera, handled with confidence to make a shiny forest creepy, a boring building ominous, and a clear pond loaded with tension. With such versatile skill for shot composition, lighting, framing, camera angles, and the sheer brutal power of great acting, the need for visual effects is minimal. The Innocents proves you don't need to spend a whole nation's GDP in digital imagery. The most nail-biting combat scenes in this movie have two kids standing still with fists closed. It's all about the craft.

The Innocents is a deeply chilling story about the formation of moral subjects in what are supposed to be the best circumstances. It contains a strong subtext about the struggles of Black and Brown immigrant families in Norway, on which I'm not qualified to provide analysis, but it's important to be aware of it in order to read the social dynamics portrayed. And it adds sorely needed variety to the genre of superpowered coming-of-age dramas.

Bonuses: +1 for the spectacular casting of these child actors.